Review: KBS’ Legend of the Patriots is Incredibly Impressive

I am rarely impressed by a television series’ production and story at the same time. It is usually either/or. So color me shocked when I began watching KBS’s Legend of the Patriots (전우/Comrades) on KBS World last week and could not believe a series of this scope was being produced by a Korean television network.

Of course, I am used to Korean romantic comedies and melodramas, so maybe I just haven’t been exposed to the full gamut of Korean television yet, but I was in awe of the series which I was actually already excited about after seeing a teaser trailer.

I usually wait until I finish the entire series before reviewing a Korean drama I’ve watched, but this just could not wait.

Legend of the Patriots is a drama series about brotherhood, love, and the effects of war through the eyes of a group of soldiers during the Korean War.

So far (and I’ve only seen the first four episodes), the series has looked at both North and South, showing the full brutality of war from both sides. We see guerrilla armies that fight to defend the innocent civilians caught in the crossfire. There are strong women fighting ride along side strong men.

Incredibly produced battle scenes you wouldn’t expect on television are tempered with emotional scenes of loss and determination and brief respites from the bombs and bullets.

They’ve touched on friendship and brotherhood, even a little romance and humor. They touch on the varying opinions of soldiers, from the gung-ho to those who choose to run away.

The series features a talented cast, with performances enhanced even more by the excellent production. It is exciting and emotional.

If it can connect to a non-Korean like me, it must connect even more to the people who were and are directly affected by the War. A thoroughly engrossing history lesson, and one that transcends cultural and ethnic boundaries.

Legend of the Patriots has certainly been a huge and pleasant surprise for me. 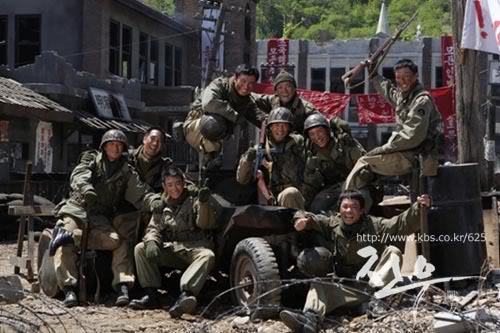 Here are some trailers, and yes, the series itself looks exactly like this…

0 thoughts on “Review: KBS’ Legend of the Patriots is Incredibly Impressive”