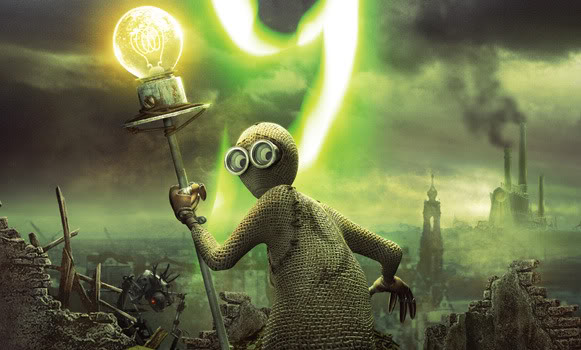 I finally got around to watching the film 9 after really looking forward to seeing it when it first came out. No not the musical, but the computer-animated film by director Shane Acker.

9 is a post-apocalyptic film, based on Acker’s own Oscar-nominated short film, about a rag-doll known only as “9” who wakes up to find himself in a lifeless, devastated world.

Created by a scientist, now dead with the rest of humanity, 9 ventures out into the wasteland and meets other “creations” who are just like him and who were apparently created before him, judging by the numbers stitched to their own backs.

These lone survivors fight to stay that way against machines that were originally created by man for good, but have since turned on their human creators and obliterated everything in their path.

First of all, the best part of the film is how it looks. It is visually stunning, one of the most beautifully and at the same time depressingly animated films I’ve ever seen. There is such a vivid attention to detail, a deep look into what is left of this ravaged world. And these deep visuals play a huge part in conveying the emotions and pushing the narrative forward.

The film’s narrative is composed of a string of (amazing) action sequences that rival even the biggest live action blockbusters. But the visuals help enhance the emotional aspects of the film; life in a desolate world, the struggle to survive against what seems like an unbeatable enemy.

While I only wish the story itself was as deep as the visuals, the film makes up for it in the emotion. In just the short time we spend with these characters, we feel for them and want to root for them. And because of that, we want to know more about them. We want to delve deeper into their lives and relationships. There is even a hint of romance that was only barely touched upon.

With a runtime of 79 minutes, I feel like the 11 missing minutes it is short for a full 90 minute film could have been used very well to really make the movie excellent with deeper characters.

Acker’s original short film was simple and wonderful, especially with no dialogue, but really opened up a literal world of possibilities. The feature film is almost like the next step to the real, final film.

But watching the film, you just can’t help but be sucked in. The movie leaves you wanting much more, but in the process lets you on an exciting, visually stunning ride. The film has its shortcomings, but the experience was definitely worthwhile and would love to see more animated films that are as ambitious as 9.

Good Ol’ Review: Though Far from Perfect, Cornerstone/TV5/Kumu’s “Top Class” a Solid Production That Does Its Part to Further Grow P-Pop

Good Ol’ Review: Excellent Cast Powers Poetic and Relatable “Going to You at a Speed of 493km”