During the Pit Stop, BFFs Tanner & Josh and Tiffany & Krista talk about the U-Turn on the next Leg and hoping to stay together and get Justin & Diana out. Tanner says he hopes to get some good karma this Leg.

Arriving at night, the teams are taken aback by the number of people sleeping on the floor at the train station.

The teams board the train and travel to Agra where Phil welcomes them on the platform. They all hurry to marked tuk-tuks to the banks of the Yamuna River for their next clue.

Tiffany & Krista arrive at the cluebox first and it contains the Road Block: Who’s ready for laundry day?

For this Road Block, teams must wheel a bicycle with dirty laundry to a wash tub where a local will show them how to wash laundry, Indian style. Once they’ve washed all their saris and laid them out to dry, they will receive their next clue.

Krista, Chris, Denise get started with the Road Block. Krista tries riding the heavy bicycle and then falls over in the rocks. Chris has no problem while Denise gets some help rolling down.

Tanner decides to do the Road Block, but sees that Josh also needs to complete this Road Block for their Speed Bump. Joey and Diana are last to decide, but all teams get to the tubs at about the same time.

Josh watches from the starting point and Tiffany explains to him what’s going on with their Speed Bump. Tanner asks the others if they plan on U-Turning them. None answer at first, but they eventually tell him “No.”

While Tiffany tries to avoid getting landed on by a dragonfly, the teams finish stirring the saris into the drums. They move on to getting piles of already washed stuff to the drying area.

Joey and Chris finish the Road Block first and teams must now make their way to Hanuman Temple and receive a blessing for their next clue. Diana is next out.

Tanner finishes and tags Josh in.

At Hanuman Temple, Joey & Kelsey get their blessing their Detour clue: Cans or Candy.
In Cans, teams must load a cargo bike with 120 cooking oil cans and deliver them to the New Taj Oil Company.
In Candy, teams will learn how to turn winter pumpkins into a favorite Agra soft candy called petha. Once they have cut and washed one man (or 90 lbs) of pumpkin, they must deliver two finished batches to receive their next clue.

Back at the Road Block, Tanner is hard at work as Krista and Denise finally finish.

Across town, Joey & Kelsey’s tuk-tuk driver takes them to the wrong place, allowing Justin & Diana to get to the cans first. Chris & Logan get to the pumpkins which Denise & James Earl and Tiffany & Krista also choose.

Josh finally finishes the Road Block and he and Tanner are off. They also choose Candy.

At Candy, Chris & Logan decide to try and weigh theirs, but the boss says “Not enough! Go back!” They cut up some more and get the thumbs up. They hop into their tuk-tuk to deliver the candies. Tanner & Josh arrive.

Justin & Diana are ahead of Joey & Kelsey as they unload their cans and receive their next clue.

Teams must head to Bijlighar Chowraha Roundabout. Phil asks if any other team can stop Justin & Diana.

Joey & Kelsey and Chris & Logan have the best chance of doing that as they both finish their Detours.

Neither Justin & Diana’s drivers (theirs or their crew’s) know where they’re going. And we are to believe they are lost, but they still step on the mini-U-Turn board first and get the next clue.

Teams will now be able to check-in at the Pit Stop at the Moonlight Garden, across from the Taj Mahal.

Justin & Diana decide not to U-Turn anyone, but Joey & Kelsey decide to U-Turn Tanner & Josh.

Justin & Diana stay in the lead and step on the Mat as Team #1. Phil awards them a trip to Honolulu.

Joey & Kelsey and Chris & Logan check-in as Teams #2 and #3, respectively. Neither wants to hand Justin & Diana the million dollars. “They are not winning the million,” Chris says. 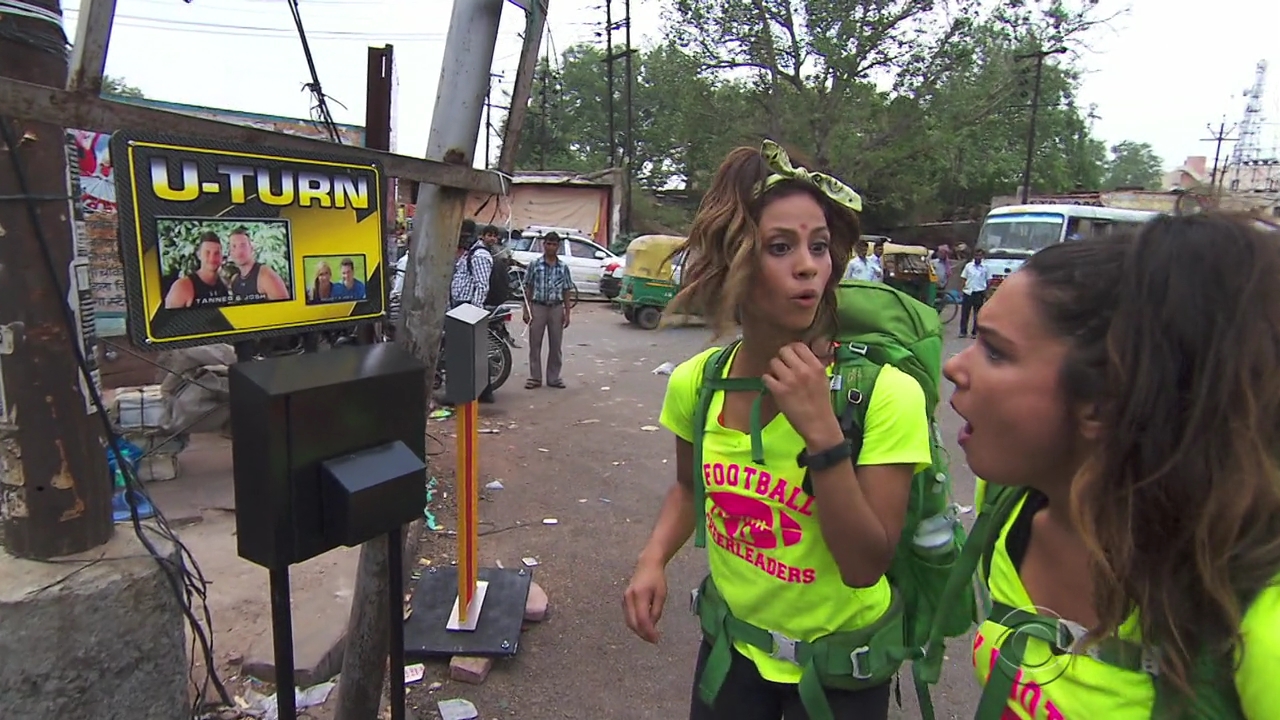 Tanner & Josh get to the U-Turn and are also shocked by Joey & Kelsey’s decision. Tanner says he’s rooting for Justin & Diana now.

Denise & James Earl seem to get dropped off at the wrong place. That allows Tiffany & Krista to finish as Team #4.

Tanner & Josh are doing the Cans Detour as Denise & James Earl get pointed every which way.

But Denise & James Earl are finally given the right directions. They hop on a non-Race flagged tuk-tuk and head to the Mat to officially check-in as Team #5.

That means Tanner & Josh are last and eliminated.

Woohoo! Welcome back India! Can you believe the last time TAR went to India, it was Brendon & Rachel’s first season? It was that long ago. And it’s about time because India always delivers for TAR.

This is likely TAR’s 2016 Emmy submission right now. It had all the elements that help make TAR amazing, even in its current state.

India as a location is always crazy and fun, it doesn’t matter what season or international franchise. The culture shock, the vibrant colors, the traffic; on their own, they make for a great Leg.

But like I’ve been noting several times this season and last, it’s always great to see teams actually racing side-by-side. The Road Block was a great, though straightforward task. But seeing the teams doing it side-by-side was exciting. Same with the Detour. They were both good tasks, but seeing teams competing next to each other just adds more.

Equalizers are our friend!

This episode though pretty much confirmed that TAR has moved to eliminate the Speed Bump as an extra task. TAR’s budget has decreased with every season, so eliminating the Speed Bump task is a small price to pay to allow the show to use the money on something else. I assume we’ll be seeing more TBC Legs/Zero-Hour Pit Stops in the future as well as “Double Road Blocks” (not in the TARPHDME sense though lol) and possible “handicaps” at tasks (which many a TAR fan have included in their own fantasy Races over the years).

And I hear you TAR editors. Recycling Denise’s “Oh my God, I’m going to die today” quote from Leg 6. (I remember it because I used it for my recap title quote for that episode! lol)

That mini-U-Turn board was weird to see. lol We’ve been used to seeing the big Double U-Turn boards including that HUGE tablet one. Also, it was interesting to see them use a single U-Turn as well. But I still don’t like U-Turns at the end of a Leg. U-Turns should be used to create drama, not just eliminate a team outright like it usually does.

Overall, this might have been the best, most exciting episode of what has shaped up to be a very solid season. Barring the Finish Line result, I might say this is the 2nd best season since TAR17. (TAR25 is the best of course.)

A great Leg for Denise & James Earl. Denise especially was awesome doing the Road Block. Especially in an environment like India, she kicked ass.

Logan & Chris are just great. This might have been their most solid Leg yet. They Raced well, but also still provided some hilarious quotables and little arguments.

Tiffany & Krista have been fighting hard and doing well. Their over-defensive-ness about the U-Turn was kind of a turn off. I’d have more respect for them if they came out and said…

But that didn’t really matter anyway. Just a bit of drama which actually has been absent this season. Not even the big rivalry had that kind of tension.

Speaking of, I’m actually sad to see Tanner & Josh eliminated. I grew to really like them especially once they (read: the show!) dropped their crusade against Justin & Diana. They were much more likeable and interesting without the forced rivalry. Their positive attitudes despite knowing they were likely eliminated was great to watch as well. It’s too bad they peaked at the start of the Race instead of now.

Like Tiffany & Krista said, Kelsey & Joey are the silent ones, but they are the ones you have to watch out for. Kelsey & Joey’s edit is exactly the kind of edit TAR likes to give its couple winners. (Kinda boring, stays out of trouble.) So they definitely have a chance to win the whole thing. Them U-Turning Tanner & Josh was unnecessary, but unless we missed something on the cutting room floor, Tiffany & Krista’s absolute disgust with them was kinda weird too. lol

And finally Justin & Diana. Eeek. Please no Rachel & Dave 2.0. Natalie & Meaghan dominating TAR Canada 2 was alright because there weren’t many other teams to root for other than Sukhi & Jinder. Plus, they weren’t cocky about it. Justin especially is just too much of a forced personality. If he’s really a huge fan of TAR, then he knows exactly how to act to play up to the camera and that’s what annoys me most. But them winning all the time and getting lucky breaks is annoying too.

Denise: “I wanted to sit down and cry. How much more laundry did I need to do?!”

Logan: “Are you going to cut your hand off?”

Logan: “Just keep my name out of your mouth.”

James Earl: “I have no idea what a mann is!”

Krista: “It’s always the quiet ones you have to watch out for.”

They’re back!
Over 680! HD Episode Caps from this episode are now available at
photobucket/xangatheamazingracecaps3

Recap: The Amazing Race 31, Episode 11 – “This One is For One Million Dollars”