Zabyun informs everyone that Queen Mabayuine is still alive. She knew she could transfer her soul into another Stone and it is likely she did so with her headdress’ guardian stone.

Muryou comes in and after analyzing the Stone, confirms that the Queen’s life energy is in it. She should be waking up soon.

Everyone is excited. But Takamichi warns that the Queen might not be able to handle hearing that Crystalia has fallen and her husband is dead. 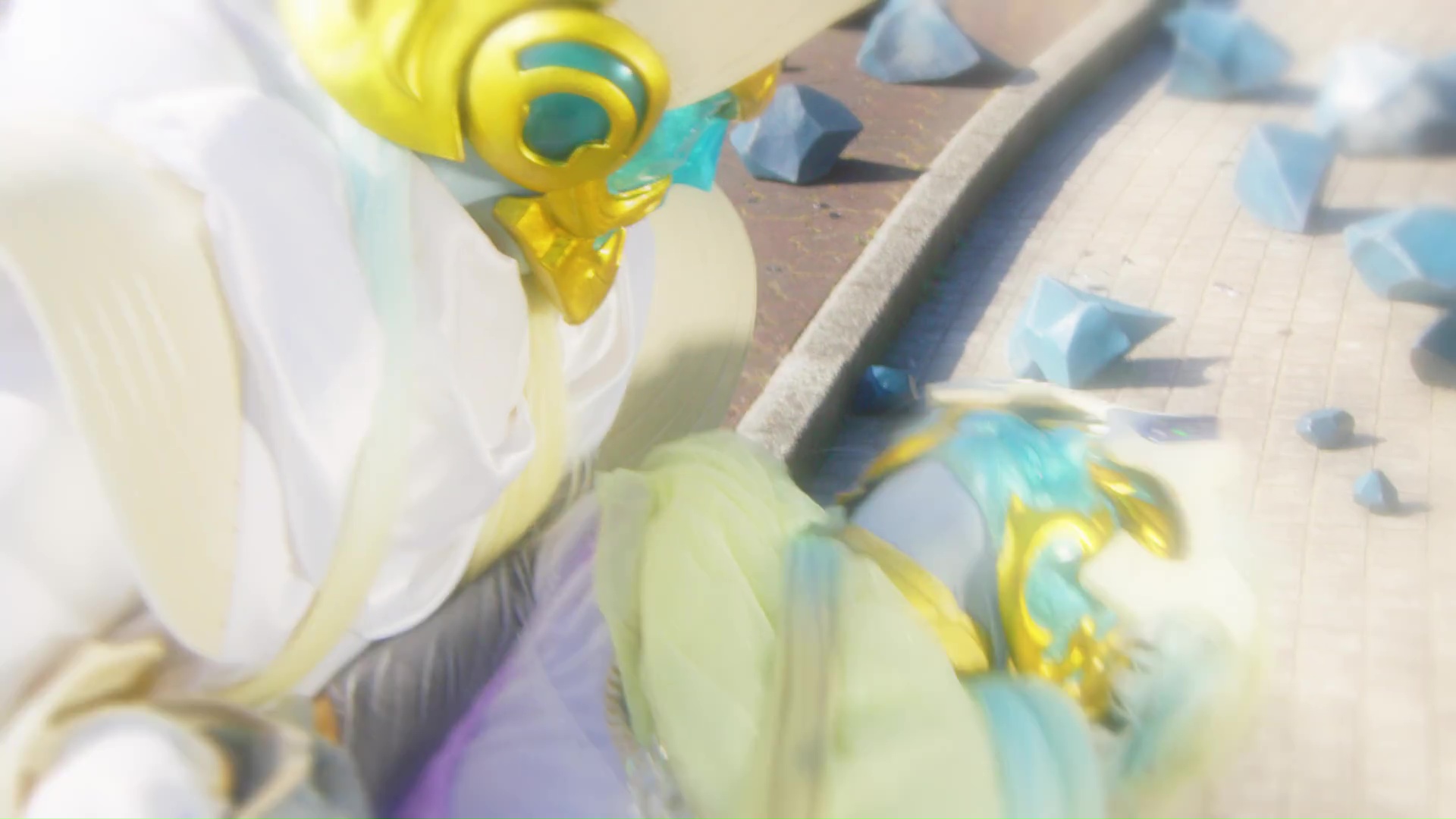 Takamichi relates a story about how she helped him harness the power of Shiny Breaker. But Mabushina had come running and cut herself on the broken glass. Seeing her daughter injured, the Queen collapsed from the shock.

While the Queen is super powerful, she is emotionally fragile, especially when it has to do with her family. So the shock of what’s happened could shatter her Stone.

The Kiramagers have to head out when a Jamenshi appears downtown. But just as Takamichi leaves, the Queen awakens.

Safe Jamen is turning people into gold coins to lock inside his safe.

Queen Mabayuine is happy to see her daughter all grown up. But asks what they’re doing on Earth. Trying to hide the truth, Takamichi says everyone, including the Kiramai Stones, accompanied him on his trip home.

The Queen comments on how great, though different, the Kiramai Stones look. Shovellow almost spills the beans, so Mabushina changes the subject and tells her mother they should enjoy Earth’s scenery.

Mabushina turns her mother to the monitor, not knowing that it’s actually tuned to the Kiramagers battling on the field.

The Queen is shocked to see a Yodon Jamenshi and she remembers that Earth would be the next target after Crystalia. She begins to assume that something must have happened to Crystalia and her husband. Her whole headdress begins to shake.

Mach jumps in to say what she’s seeing on screen is rehearsal for a production of Crystalian play Jiro Kurni.

Jiro Kurni is about five master thieves that retrieve a national treasure. And the villains in the play will be portrayed as Yodonheim.

Safe Jamen zaps the Kiramagers with some financial instability before leaving.

Takamichi leaves the Operation Room to call the Kiramagers to fill them in on what’s happening. They will have to pretend to be actors.

Shiguru, our certified movie star, takes the lead to introduce their acting troupe.

Mabushina tries to say Shiguru will play the lead. But Queen Mabayuine remembers that Mr. One, the leader of the thieves, was yellow. So Tametomo is the star.

The red Mr. Two is a playboy conman, pink Miss Three is a seductive safe cracker, green Miss Four is a high society tomboy and blue Mr. Five is a pitiful geek.

Takamichi leads them out to prepare for the play.

Queen Mabayuine says she always dreamed of becoming a singer-actress one day. Mabushina remembers her mother was so good at singing and dancing. The Queen remembers how Mabushina was so shy to even perform for her family.

They flashback to the day Queen Mabayuine collapsed from Mabushina tripping on glass.

King Oradin taught Mabushina a Crystalian saying, “When shown consideration, give back twice as much.” Since Queen Mabayuine was worried about her, Mabushina should return the concern in double.

The King suggests Mabushina sing a song for her mother. But Mabushina was much too shy.

Mabushina apologizes for not being able to return in double back then. But Queen Mabayuine says that’s alright as it is not something one forces themselves to do. Anyway, seeing her family healthy is enough for the Queen to be happy.

The alarm sounds and Muryou plays it off as being the signal for the start of the show. The Kiramagers head out. Mabushina sets her mother to the screen, but the Queen says of course they must go out and watch in person.

Takamichi sets out a chair for Mabushina and their mother to watch as the Kiramagers take on Safe Jamen (while pretending it’s part of a performance).

Sayo tries to open the safe using the dial. But Safe Jamen says of course these days, you need two-step authentication. They need a passcode as well. Sena decides to press every key. 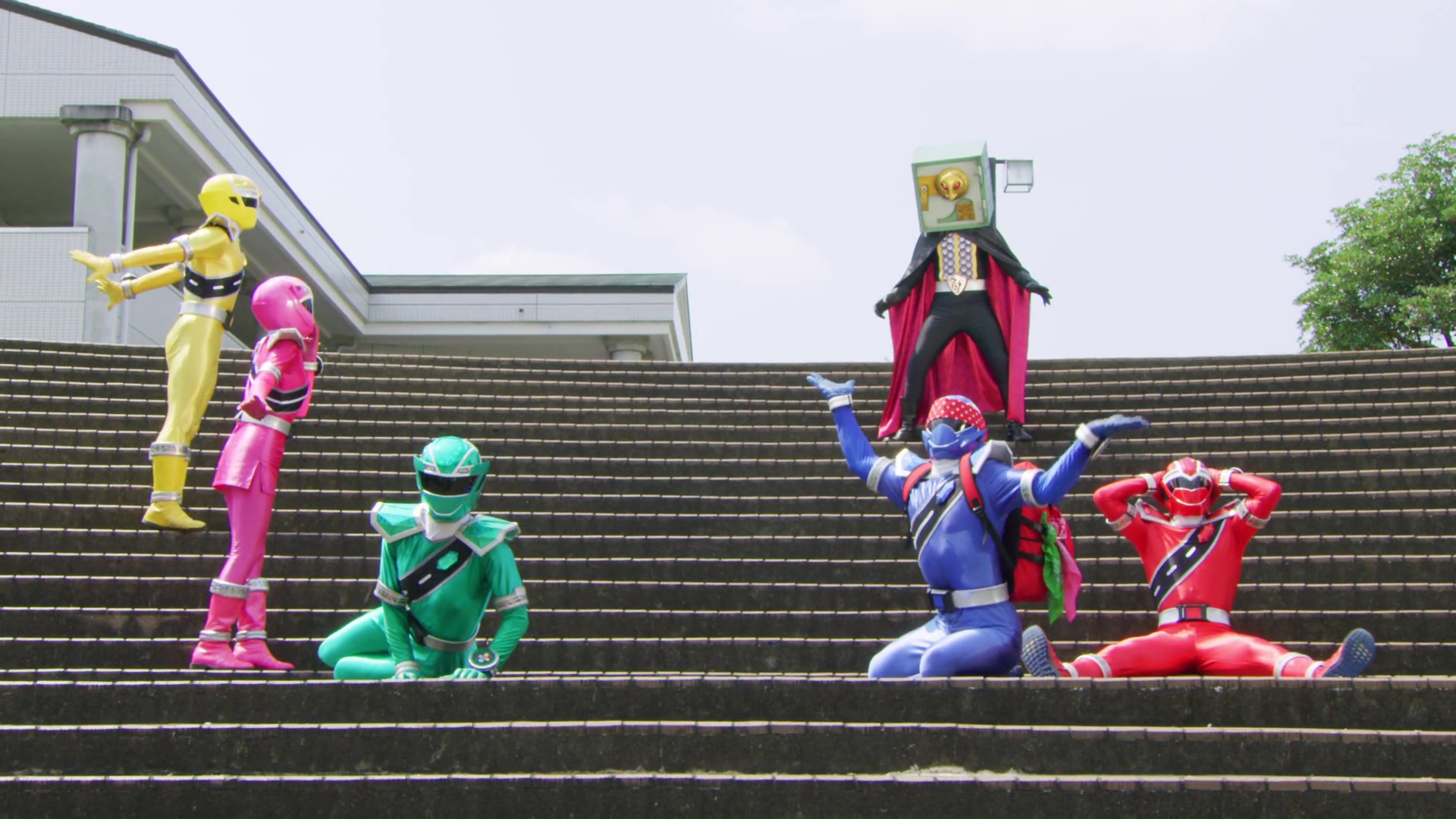 But Safe Jamen says after three unsuccessful attempts, his safe’s contents will be destroyed in five minutes as a security measure.

Queen Mabayuine loves the plot twist while everyone else is shocked.

Mr. One Tametomo decides they will just have to force the safe open. But the Queen starts to wonder if this is really a play. Especially when the Kiramagers get knocked on their backs.

Takamichi and Mabushina try to ease their mother’s concerns. But Queen Mabayuine starts to see the truth.

Mabushina has one last idea to protect her mother from shattering to death. She hands their mother to Takamichi and heads up the stairs to perform her new character song.

Mabushina’s song serves as the background music for the Kiramagers as they battle Safe Jamen.

Queen Mabayuine is so happy to see her daughter has really grown into a wonderful, confident young woman.

The Kiramagers knock Safe Jamen down the side of the hill. Mabushina runs to her mother and asks what she thinks.

Queen Mabayuine asks what has happened to the King and Crystalia. Mabushina is surprised she is not shocked. The Queen says she is. But like the Crystalian saying, seeing as how Mabushina mustered up the courage to sing like that for her, she must return that courage twice as much and overcome the painful shock.

Safe Jamen climbs back up and Queen Mabayuine tells Takamichi to channel his power through her.

While the boys hold Safe Jamen in place and Sayo and Sena hold on to the Queen, Takamichi sends a Shiny Breaker beam right through her. The Queen is able to direct the power straight at Safe Jamen’s door, releasing all the coin people.

The Kiramai Stones change to their Mashin forms, much to the Queen’s surprise. They explain Juuru Hiramekinged them this way and Queen Mabayuine can’t believe Juuru has the same power as her husband.

Mabushina excitedly celebrates with her mother. But the Queen says she feels a bit tired.

Before falling back to sleep, the Queen tells her daughter to take care of Earth

Mabushina tries to call out to her mother, wanting to talk with her more. But Zabyun says they’ll just have to wait until she wakes up again.

Mabushina holds her mother close to her chest and says that she will take the strength her parents blessed her with and work hard to pay it back double. She vows to grow stronger.

After last week’s AMAZING episode, I expected this week to be one of those “breather” episodes to calm things down. But I definitely did not expect this!

So, I’m not really sure what to make of the sudden idea that Queen Mabayuine is still alive, if barely, in her Stone. It feels like it was pulled out of nowhere. And I can’t imagine no one knew it was possible except for Aqua Kiramai Stone. There was zero build up to that revelation. It was literally the first line of dialogue in this episode.

I feel like a reveal like that should come with a deeper foundation. Especially since this was a Mabushina-focus and the main takeaway was more to develop her character rather than focusing on what should be a shocking revelation that her mother is still alive.

I think they wasted a major opportunity for both Mabushina and Takamichi’s characters and the overall story by just dropping this plot point so nonchalantly. I honestly expected the episode to end with some sad result like the Queen turned evil or it was just a trick by Uncle Garuza or something.

I also kinda feel like the Queen being alive sort of waters down the emotional roller coaster they all went through the last few weeks in their quest to save Mabushina from the curse. It was an amazing last couple of episodes. But Queen Mabayuine just popping in and out like this is dropping the ball.

That said, as a Mabushina-focus episode on its own, it did a lot of add to her character. We saw a little bit of her childhood and her personality. Being a little shy and timid is something we got the impression of so far this season. But expanding on that and then seeing her in this episode as well as the season so far, Mabushina has come a long way. She’s absolutely been brave and heroic in her own right. So it’s awesome to see her continue to grow and get the spotlight while she does.

(Also, one step closer to her becoming Kiramai Aqua with her in the cockpit of Zabyun! *crossesfingers*)

But again, as our first real introduction to the Queen, it felt very awkward and like it was missing so much. Whether narratively or emotionally. It really should’ve been a big moment.

It’s so strange now. Because if there’s something I kind of don’t like or think is off on Kiramager (and Zero-One and Saber), I automatically think it’s COVID-19’s fault.

While I don’t think coronavirus is the reason they came up with the idea of the Queen popping up like this, I do blame coronavirus for not getting more unmorphed scenes with the Kiramagers.

In normal times, I absolutely think they would’ve had the Kiramagers, unhenshined, acting out their play characters for some amusing laughs. Instead, we only got to see the suit actors (especially Shiguru’s) getting to do the characters. Usually, we’d get both. And seeing the main cast either in a body switch episode or having to act out characters completely different from their own is always a fun treat every year.

Unfortunately, we’re likely not going to get that. I think the main cast were on-screen for like two scenes total. And I know that’s absolutely to limit their time on-set as a precaution.

I’m sad I have to watch episodes and be overly conscious about seeing what the effects of COVID-19 might be this week. It’s a sobering feeling. Instead of just enjoying the episodes, I make myself wonder what coronavirus effects pop up on the show this week. =(

Anyway, Mabushina’s song is great. Mabushina herself is awesome. And the Crystalias are still a kick-ass family. But this episode, I really wish they did things differently.