While the others are hesitant to ask Mabushina more about Takamichi, Juuru has no such qualms. He asks bluntly how Mabushina and Takamichi could be siblings when he looks human. 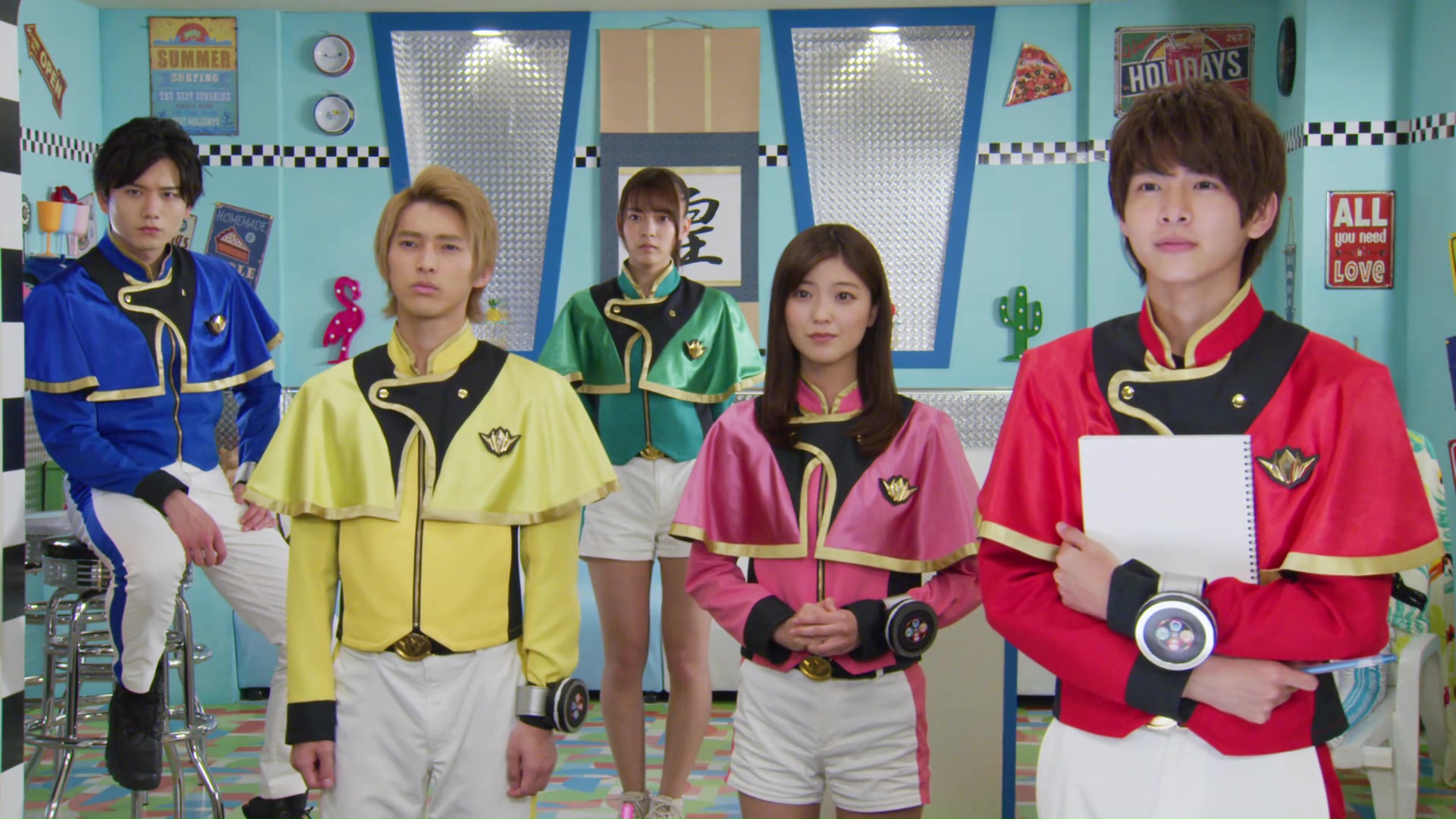 While Mabushina says Takamichi will never be of any use to them, the Mashins end up telling the story of how he was adopted. King Oradin studied the stones from different worlds and found particularly strong stone power on Earth where he met Takamichi’s father. Together, they mapped the locations of those strong stone signals using the device he created in the notebook which Takamichi uses now.

Takamichi came along when they were about to dig up one of the stones which ended up being a Monstone that invaded his body.

To save his life, King Oradin brought Takamichi to Crystalia and implanted a Kiramai Stone in him that could regulate the Monstone’s power.

Takamichi walks into the Operation Room and finishes the story, saying that’s when he stayed in Crystalia to become its prince and champion, Kiramai Silver.

Mabushina demands to know what Takamichi is doing here and he says he had Muryou working on a secret vehicle for treasure hunting which he is picking up today. Tametomo tells Takamichi to respect Mr. Hakataminami since he’s older. But Takamichi says that’s not the case between them.

Mabushina says Muryou has been missing since yesterday and unreachable. But regardless, Takamichi has no business being here.

She tries pushing him out of the room, but Takamichi calls Muryou himself. Muryou says it shouldn’t take much longer, but it’s a little difficult to finish up since it’s even more dazzling than the Mashins.

Takamichi tells him to hurry it up since he’s got treasure hunting to do. Just then, the alarm sounds and Juuru excitedly asks Takamichi to come with. He refuses, much to Juuru’s surprise. Takamichi says he’s only concerned with treasure and leaves. Mabushina tells Juuru I told ya so.

The Kiramagers hurry downtown to find strange Venus flytraps trying to chomp people’s heads off. Bechats pop out to aid the possible Jamenshi and keep the Kiramagers’ hands full. But Takamichi arrives to help save the people from being eaten.

Takamichi says he’s here to whisk Sayo away to help him decipher his father’s clues like last time. 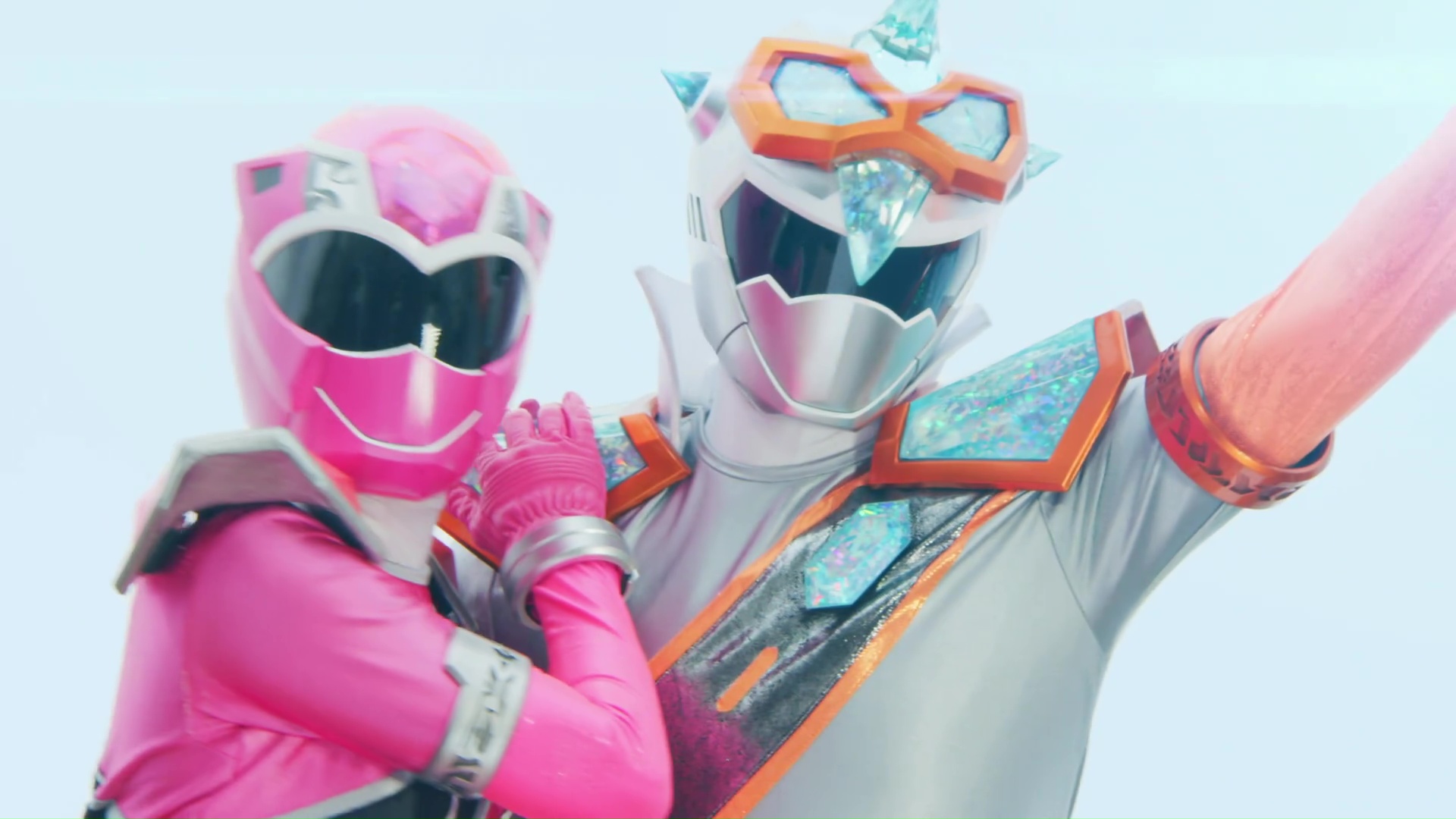 Up in the mountains, Dr. Sayo is indeed able to figure out one of the clues and it leads them to the wall they need to break through. But Takamichi will need his new vehicle to do so.

Back at the coconut tree, Juuru approaches a still upset Mabushina to ask what treasure her brother is looking for. He apologizes for being nosy, but he mentions how he feels there’s something more to Takamichi than what she’s told them.

Mabushina says there was a time when he was a wonderful brother who always took care of her.

In fact, she feels he was responsible for half of all the times she smiled.

But shortly before the Yodon invasion, Takamichi seemed different. He was more concerned with the treasure mapped out in their father’s notebook and said it contained what he wants the most out of anything. Mabushina reminds him that he once felt he doesn’t need anything else but to see everyone happy.

Takamichi said he’s forgotten he ever said that. Instead, treasure is life.

Mabushina tells Juuru she doesn’t know what that treasure is, but she is sure the treasure is what made her brother this way.

The alarm sounds again and Juuru hurries to join the others. Sayo arrives and says Takamichi told them they have manage on their own.

A little girl is getting chomped on by the Venus flytrap, but the Kiramagers can’t break free from the Bechats. That’s when Takamichi arrives just in time.

Juuru watches as Takamichi again kirakiras after saving the little girl. He says bye and starts to leave again.

But Tametomo finds the Venus flytrap tentacle growing out of the ground. They don’t think it’s a Jamenshi. Shiguru tries to pull it out, but instead, the tentacle retracts back underground.

Tametomo suggests Shovel-ji help dig it out. But Muryou calls Takamichi to say his new vehicle that can dig 100 meters a minute is ready. The others look at him, but Takamichi says he isn’t going to waste his time on anything other than treasure.

Juuru believes he is lying and runs after Takamichi back to the coconut tree.

Takamichi and Muryou meet in the Operation Room. After a tense few seconds, Takamichi says Muryou sure got old. Muryou says it’s only natural since it’s been 30 years. They laugh and he shows Takamichi his new vehicle: Drilljan.

Juuru comes running in and calls Takamichi a liar. Juuru doesn’t believe Takamichi is all about treasure hunting and is only doing it because he has to. Juuru believes Takamichi loves helping people. He came to help them save people twice and each time, Juuru noticed how shiny shimmering splendid he was.

Takamichi punches the table and says that is none of his business. But Juuru says he wants to see Takamichi kirakira even more.

The alarm sounds again. Juuru apologizes for being nosy again and hurries out.

Takamichi asks what’s Juuru’s deal. Muryou says Juuru is indeed a curious boy. He may be awkward and shy. But when he gets fired up, he is the strongest that can be. Muryou says it’s thanks to Juuru that the Kiramagers are able to shine as brightly as they are now.

Muryou says he also thought Takamichi was keeping a secret. But he knew he would be okay as long as he was doing what he thinks is right. While he doesn’t expect the others are waiting for Takamichi, he knows they’d be happy to see him anyway.

Shovel-ji starts digging, but Takamichi arrives in Drilljan and proceeds to drill faster underground on his own.

Juuru tells Shiguru and Sayo to take care of any flytraps that pop back out as he, Tametomo and Sena follow Takamichi underground.

They find the huge Haejigoku Jamenju which is the source of all the tentacled flytraps sprouting up above ground.

Takamichi is able to yank the Jamenju from the tentacles. The others combine into Land Mage to battle it. But just then, Garuza arrives in Smog Jouki and attacks Takamichi.

The uncle and nephew meet face to face for the first time in a while. Takamichi says he is surprised Garuza would have the guts to face him like this. Garuza says this is the armor that will protect him as he kills Takamichi. They battle.

While the others finish off the Jamenju, Garuza asks Takamichi if he has found his treasure already. And if not, Garuza offers to help him “again.”

Takamichi calls Garuza a disgrace and says he will never trust the word of a traitor ever again.

Garuza laughs and says Yodonheim is pretty nice. He leaves.

A very emotional Mabushina takes time for herself on the rooftop of the coconut tree.

In the Operation Room, Juuru excitedly comments on how kirakira Takamichi was earlier and holds out his hands to shake.

Takamichi just looks at him and says not to get the wrong idea. He’s just here to hunt for treasure.

Muryou drops the bomb that Takamichi is his older brother which shocks everyone, including the Mashin.

Muryou explains that Takamichi is two years older than him and that he was 15 when his aniki went to live in Crystalia. The stones in Takamichi’s body make him physically age slower, but he is still very much a Showa guy.

Takamichi does a Showa goodbye before leaving.

Another great episode. It revealed a lot more about Takamichi without giving everything away. And instead, they actually posed more questions too.

I am looking forward to Mabushina and Takamichi’s emotional reunion. The flashback and Mabushina saying that he always made her smile is a great detail about their relationship and can definitely be used in a great way in the future.

You can definitely understand how hurt Mabushina is. (Again, it helps that she is really one of, if not the best developed character this season.) And considering the implication that Garuza somehow played a part in Takamichi going astray, it helps more pieces fall into place. Perhaps Takamichi feels a certain amount of guilt. We did see him last week after Mabushina slapped him that he seems regretful.

But we know Takamichi isn’t a bad guy either. And Muryou believing he is doing the right thing is a bit of assurance about that too.

Muryou talking to Takamichi about Juuru also felt like a bit of vague foreshadowing about Juuru’s true connection to Crystalia or King Oradin himself. And Muryou’s description of Juuru being a strong leader even when he is awkward and shy was perfect.

It was kind of obvious that Muryou was Takamichi’s younger brother as soon as they were talking about honorifics. I wonder if their biological father will play a big role in the future. And it also makes sense how Muryou is good friends with King Oradin as well.

Elsewhere, Juuru was funny at the beginning when he was very excited about his drawing of Takamichi while Mabushina was hurt and upset in the corner. Read the room Juuru! Lol

Also, Shiguru’s hilarious reactions! Atom Mizuishi does a great job with the most hilarious facial expressions, always in the background. I can’t help but notice them all. Lol

The Takamichi-Sayo duo got some time again this episode. They make a good pair. And it also helps Sayo be more multi-faceted rather than just the “feelings” girl.

Overall, another great episode. I definitely enjoyed it and even if it was a little bit of a predictable plot-heavier episode, it was still fun and exciting.