Recap: Kamen Rider Zero-One, Episode 36 – I am the Ark and a Kamen Rider 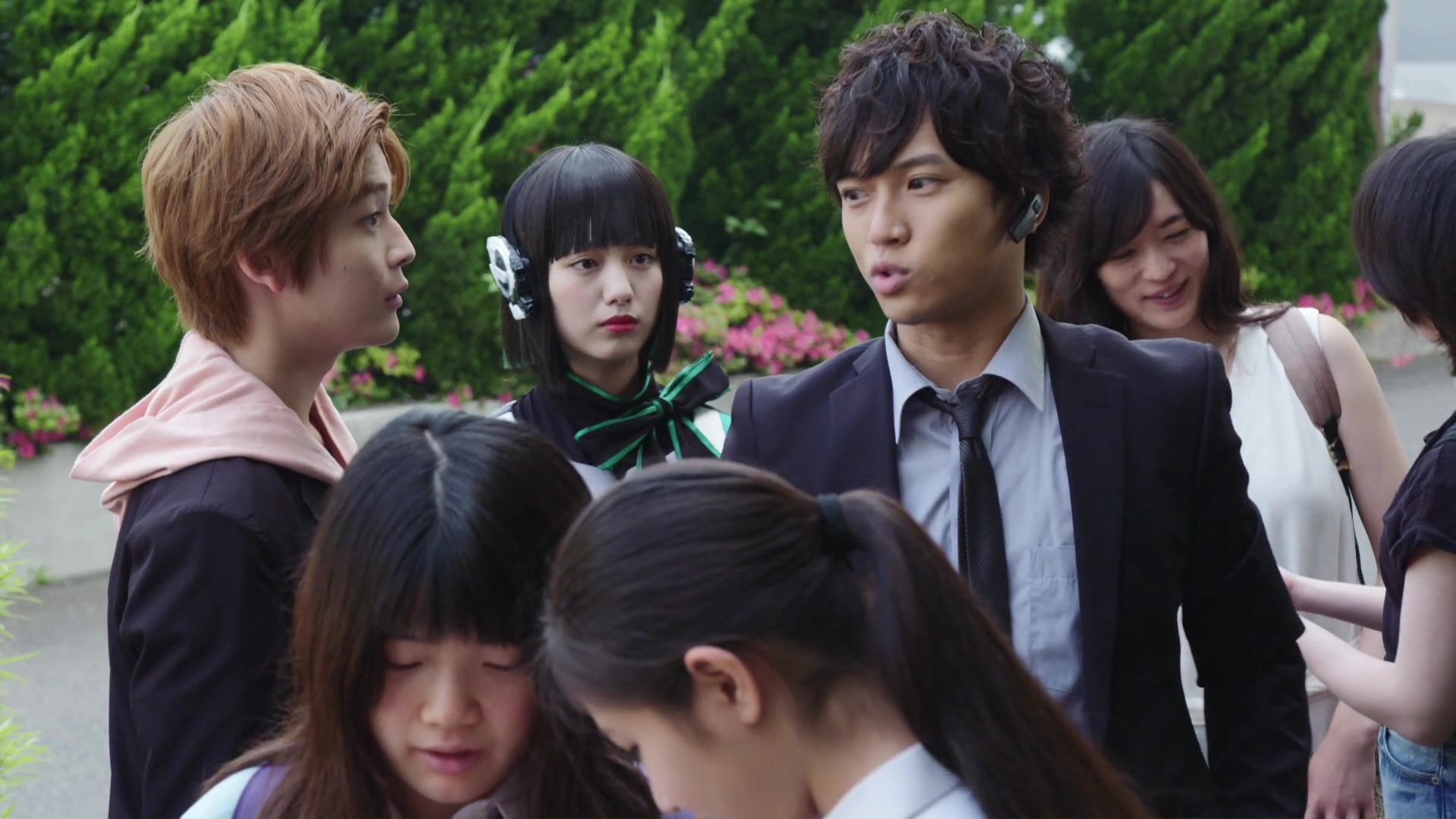 Aruto tells Izu that he thinks there’s a Humagear that he believes only Hiden Manufacturing can create. But he’s not yet sure what. As they are walking, they spot Isamu in line for a popular fortune teller.

Meanwhile, the MetsubouJinrai quartet connect to Ark and a spikey red ball appears and declares humanity is about to get wrecked.

Back at the office, Aruto activates Fortune Teller Humagear Mama Higashi Shinagawa and they give Isamu some privacy to speak with her about his concerns. 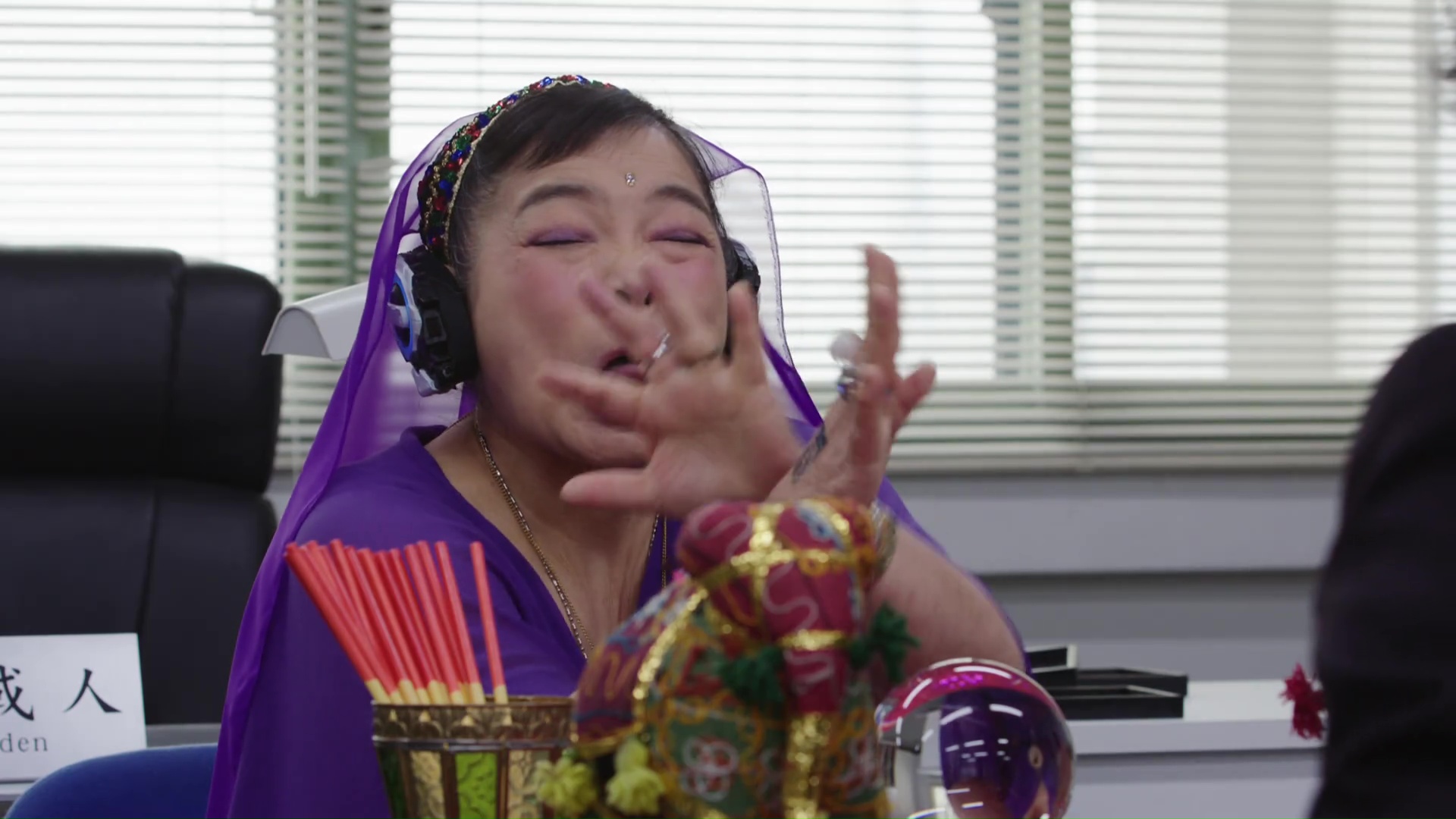 Isamu says he recently learned that contrary to the fake memories implanted into his head, his family is actually alive. So he is struggling with whether or not he should contact them since he, allegedly, told his family it would be against the rules to contact them while in A.I.M.S.

Mama Higashi tells Isamu to forget about his family and that nothing good will come out of contacting them. Isamu says this has only just put him more on edge. He storms out.

Back in Daybreak, Ark asks Horobi a question, but doesn’t let anyone answer before it storms through the building knocking Naki out and hurling Horobi into another room.

Jin hurries out to Papa Horobi. Yua comes running in, shocked at what she is witnessing.

The Ark appears to take over Horobi’s body and fashions an Arkdriver around his waist.

Jin calls over to Yua and says this is the time for them to carry out their justice.

Both of them henshin. But Ark lets out a scream that holds them back.

Ark says it already knew Jin had betrayed it. The Ark henshins. 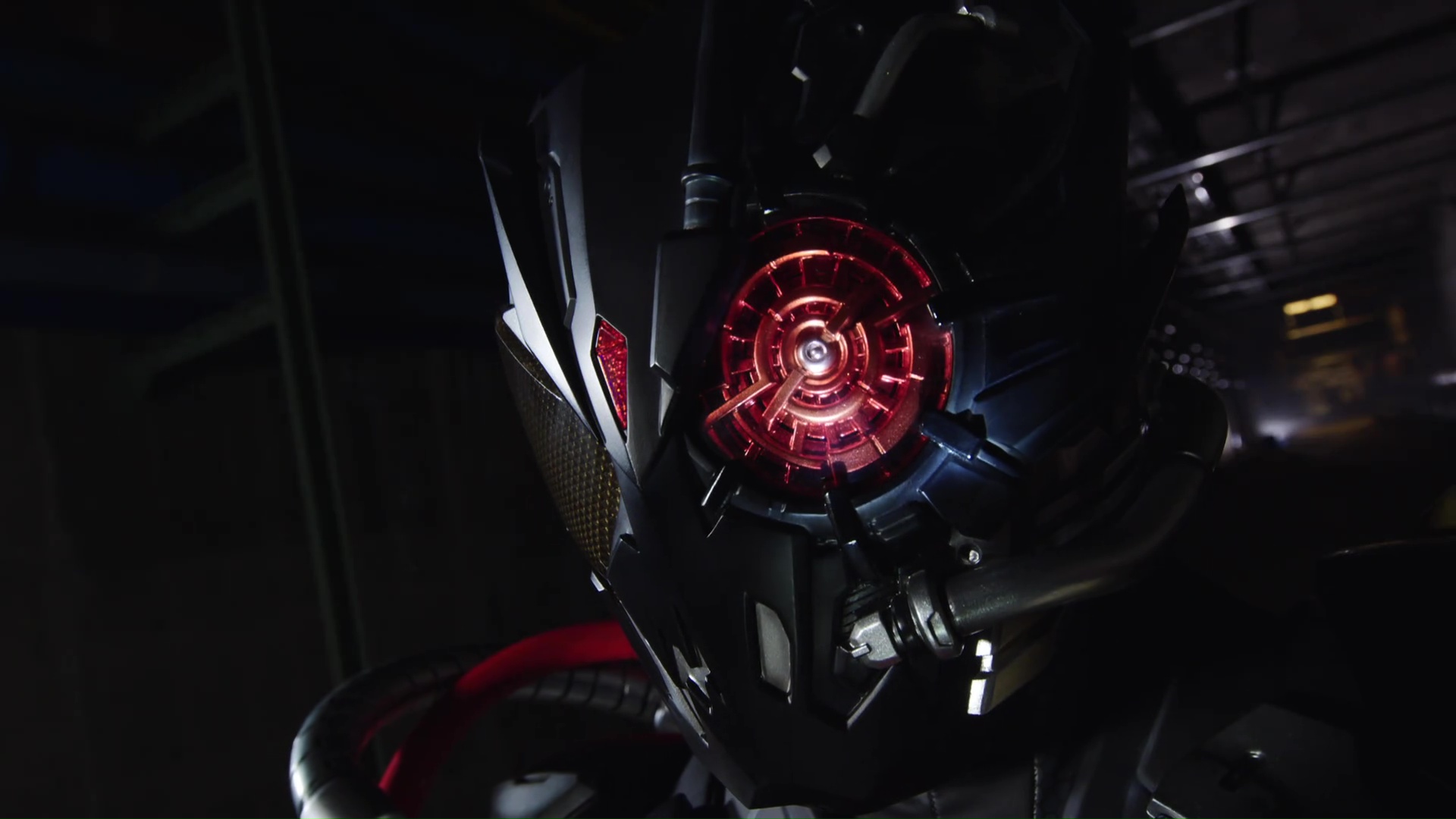 Back in town, VP Jun delivers a live advertisement for the commercial release of the Raidrisers.

Gai criticizes that VP Jun was very unnatural with the ad. VP Jun wants to talk back to Gai, but SVP Sanzo makes him think better of it. Gai says VP Jun better shape up or he’s gone.

Isamu comes back into the office to tell Aruto about the Raidriser release.

Dr. Bot comes in with Hiden Manufacturing’s first original AI, a friendly little device named Ai-chan. Dr. Bot says he realized there was no need to put Aruto’s concept into a full Humagear form since sometimes it’s harder to speak with a humanoid technology.

Aruto explains to Isamu that he can speak with Ai-chan about anything instead of fortune telling.

Back in Daybreak, Jin and Yua are making no progress against Ark. Ark attacks them with copies of weapons popping out of his Driver. It sends Jin flying and then proceeds to force Yua out of her henshin.

Ark takes a knee next to her struggling body and says to eliminate humans. Jin attacks to give him an opportunity to whisk Yua to safety.

Ikazuchi is overseeing the repairs of Naki when HorobiArk comes in and says Jin will be back.

Jin brings Yua to the hospital. He apologizes to her and says he will carry out her justice.

Over at the office, Ai-chan suggests Isamu go see his family. He isn’t sure yet, but Ai-chan says he should ask himself what he truly wants to do.

Isamu heads over to the address of his family’s home and he sees his father, mother and younger brother. They seem happy and comfortable. Isamu’s father makes a dad joke and they all laugh.

A smiling Isamu tells Ai-chan that she is pretty good. She asks if Isamu is happy now, but he says he doesn’t know.

Back at the office, Aruto is speaking with VP Jun about the Raidriser’s commercial release. But VP Jun says he has a lot on his plate. Aruto says his grandfather would be rolling in his grave if he knew how far away from Hiden Intelligence’s core principles Gai has taken the company.

Aruto, Izu and Isamu hurry to the hospital to see Yua who has awakened. She explains that the Ark has revived and it is thanks to her joining forces with Jin in order to defeat and destroy it. 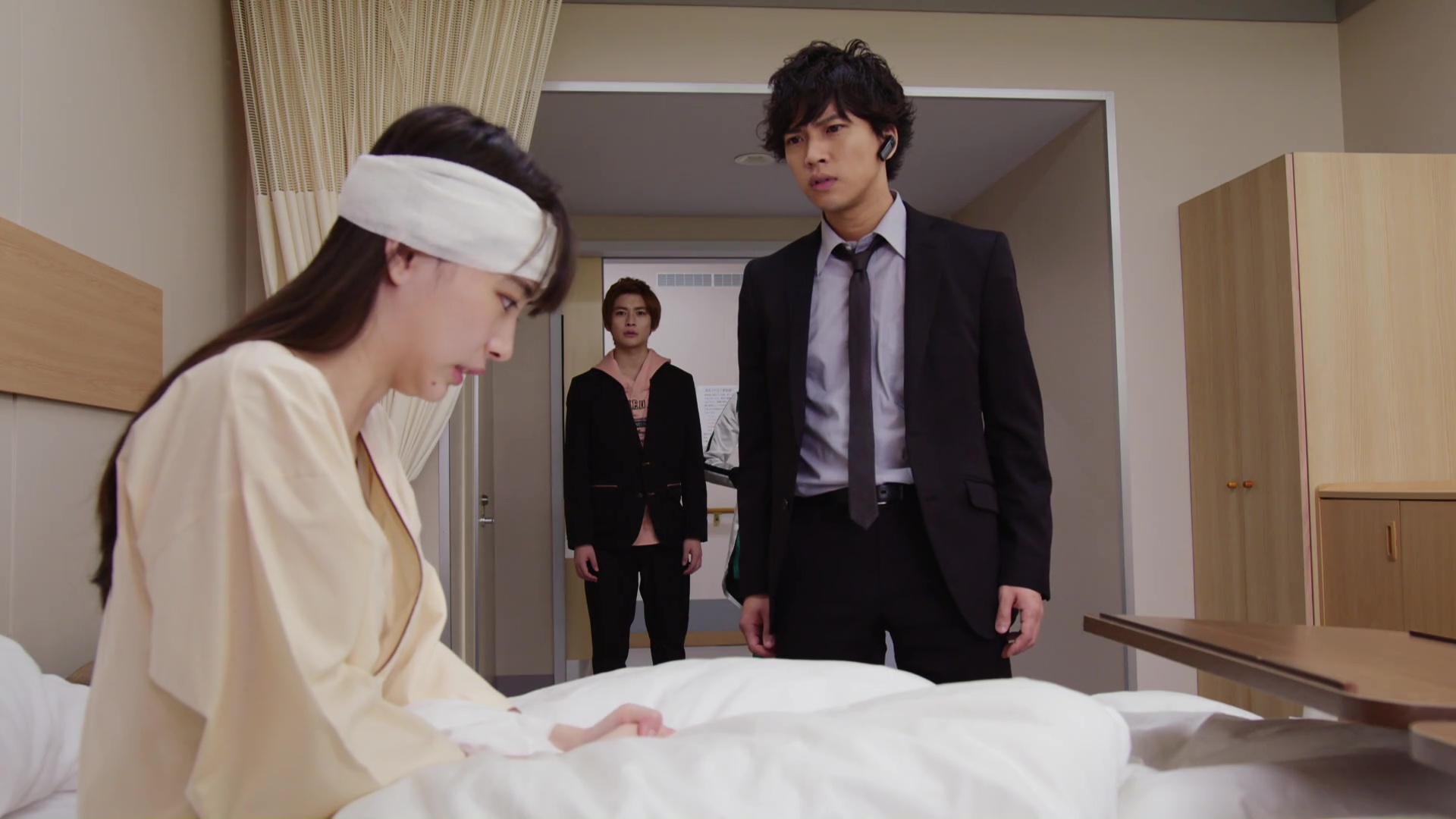 That included freeing Naki from Isamu’s body. And a vessel for the Ark, which Jin said would be Horobi. Jin had said destroying Ark would foil ZAIA’s evil plans. That’s when Yua agreed.

But Yua says Ark has completely taken over Horobi’s body and has immeasurable power.

Yua cries as she blames herself. Isamu tries to comfort her.

Aruto says he is to blame as well since he allowed Horobi to get away with the Ikazuchi Data Key. He starts to run out, but Yua says there’s nothing they can do to stop Ark.

Aruto believes Horobi can change and reaffirms his vow to protect all Humagears. He and Izu leave.

Isamu gives Ai-chan to Yua so she can speak with it. She asks what it is and Isamu says it is what she needs most right now: a friend.

Outside, Isamu says they must defeat the Ark for both humanity and for Humagears. 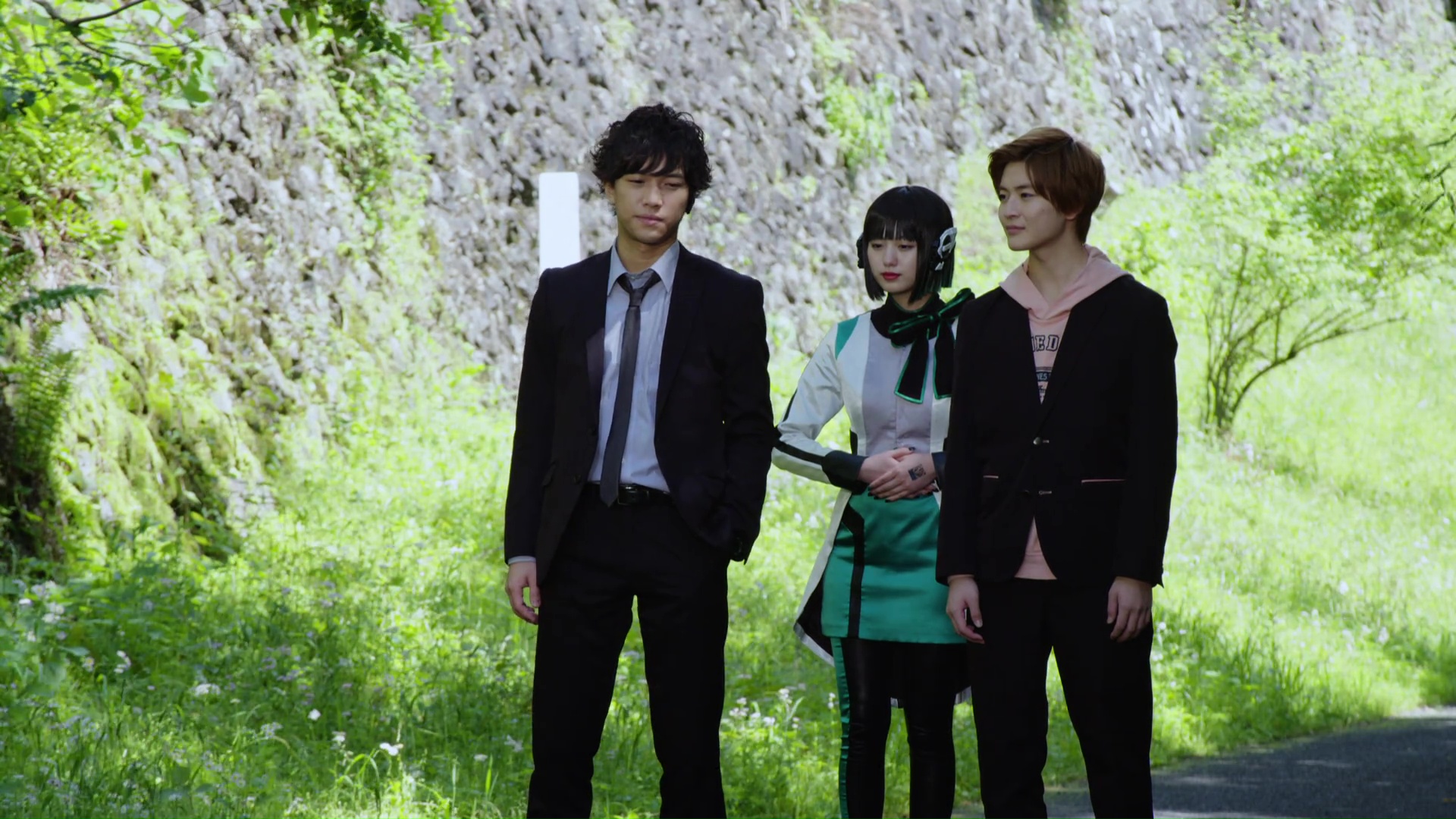 Aruto asks if he feels that way because of Ai-chan and asks what had been bothering him. Isamu says just normal stuff. But normal stuff is good compared to what they had been dealing with. It’s almost even boring now.

They make their way to a bridge heading toward Daybreak. But something triggers intense pain in Isamu’s head.

It is Ark who walks toward them already henshined.

Aruto tries to reach out to Horobi and tells him to take his body back. Ark thinks he’s crazy. Aruto says he believes in Horobi as he and Isamu henshin. They battle.

Aruto and Isamu are able to seemingly beat down Ark and forces it to dehenshin.

But they are shocked to see that in the suit was actually an Ark-controlled Jin.

Ark leaves Jin and engulfs Isamu, forcing him to dehenshin.

Ark says deceiving and manipulating humans is just one of the malicious things he learned from humans themselves.

Definitely great to have an actual new episode of Kamen Rider after so long! Again, hoping the cast and crew stay safe as they work to bring us some great television.

This episode was very interesting because a lot happened, yet I still feel like we’ve missed something since we last hung out with our friends.

I know the assumption is that they’ve eliminated a few filler eps now with the episode count being finalized at 45. (Can you imagine only 9 episodes left?!) That should make for tighter plot moving forward.

But with this episode, I wonder if a filler ep or two between 35 and this one could have helped build more tension to the events here. The clip shows certainly didn’t help too much to bridge the gap. But it’s something to think about how they will have tweaked this final stretch of episodes.

A lot of good things in this episode. But perhaps after what was essentially a long break, jumping right into the middle of the action might have felt a little off. Maybe it’s just the need to get comfortably back in the thick of things.

Because they definitely got into the thick of things this episode.

First to the lighter portion of the episode. I’ve harped on how much I disagree with what they did to Isamu’s character. But the scene with his family was a nice little moment. I certainly hope that’s not all they’re going to do with that. But I won’t hold my breath. Still, seeing Isamu’s enjoyment of puns being apparently a very Fuwa Family pastime of enjoying dad jokes is the kind of nice character moment you like to see.

Now, speaking of Isamu’s character. No, no, no I will not have Ark erasing all of Jin’s character development like Gai did to Isamu! Nope! I will not stand for it!

lol Really though! We get a tease of what Jin was working on in the shadows. From there, it would’ve been great to see him go up against his Papa Horobi and their other MetsubouJinrai friends. But we can assume Ark reprogrammed Jin to be the loyal son once again. (Similar to what Horobi did to him when he was starting to gain the feelings? Hmm…)

Not really knowing what Ark’s specific endgame is (not the broad Kill humans), we’ll just have to wait and see. And again, what could end up being Zero-One‘s endgame? Who’ll the Final Boss be? We still have Gai’s smirks to deal with even if Ark gets put down. And then of course MetsubouJinrai as their own entity as well.

Yua’s day of reckoning deserved its own episode, to be honest. She deserves that spotlight and focus. Realizing her mistakes and maybe short-sightedness and then realizing what Isamu’s friendship (?) meant to her and other enlightening realizations would be a great climax to her story. Ai-chan helping to bring that about would be perfect too. We’ll see if she gets more material next week.

Ai-chan is a great addition. Aside from how awesome it is for Mao Ichimichi to voice Ai-chan and officially being part of the Kamen Rider family, Ai-chan is a great way to further Aruto’s personal mission to fulfill what his grandfather started and dreamed of with Hiden. It’s a next step, essentially, for what a post-MetsubouJinrai, post-ZAIA world of Humagears could become.

Mama Higashi though was kinda slacking as a fortune teller! Lol Might need to tweak some of her programming lol

Overall, a very full episode with lots of good things and exciting developments. Definitely felt a little weird after the long break. But I suppose it’s just a matter of getting back into the swing of things after a while.