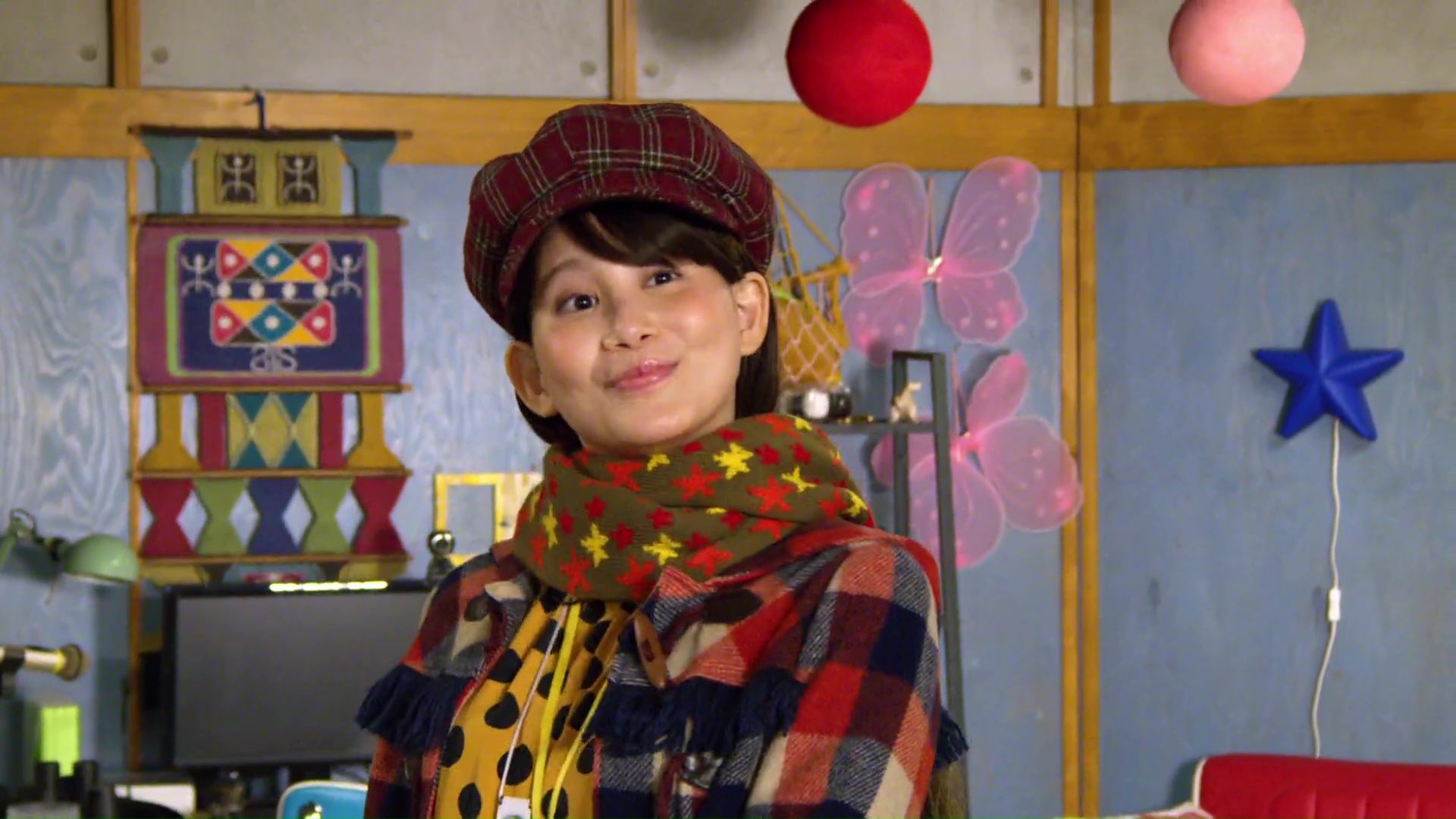 Ui announces she will be flying to America to be part of the production team of a movie. They liked her videos and reached out to her. Canalo asks if she’s sure this isn’t a scam, but Ui says she’s sure. Ui asks if they can look after her father while she’s gone. Asuna sees her off to the airport.

Later, Koh, Melto, Asuna and Canalo hurry out when Towa and Bamba observe suspicious activity from Kureon. But before they leave, Papa Naohisa gives them an energy drink a friend of his invented. Koh immediately drinks and he faints.

The energy drink comes with the warning “So spicy, you’ll faint.” But it does give you lots of energy.

Koh pops back up and they rush out.

Meeting up with Towa and Bamba, they are immediately met by Wiserue who is flanked by Kureon and a new Minosaur.

The Minosaur writes “Curtain Rises” in the air the Ryusoulgers are transported into a theater. Wiserue declares that It is show time and Koh, Asuna, Bamba and Canalo are shocked to see Melto and Towa on stage dancing as Wiserue sings.

After the song, Wiserue puts Melto and Towa to sleep and the rest of the audience disappears. They try to rush the stage, but Wiserue says only performers are allowed. And Bamba realizes if they do get on stage, they will be under Wiserue’s control.

Wiserue says this was just the opening act of three and he’s already cast the other two. The Minosaur pops out and sets up the second act which has Canalo and Asuna playing Romeo and Juliet. 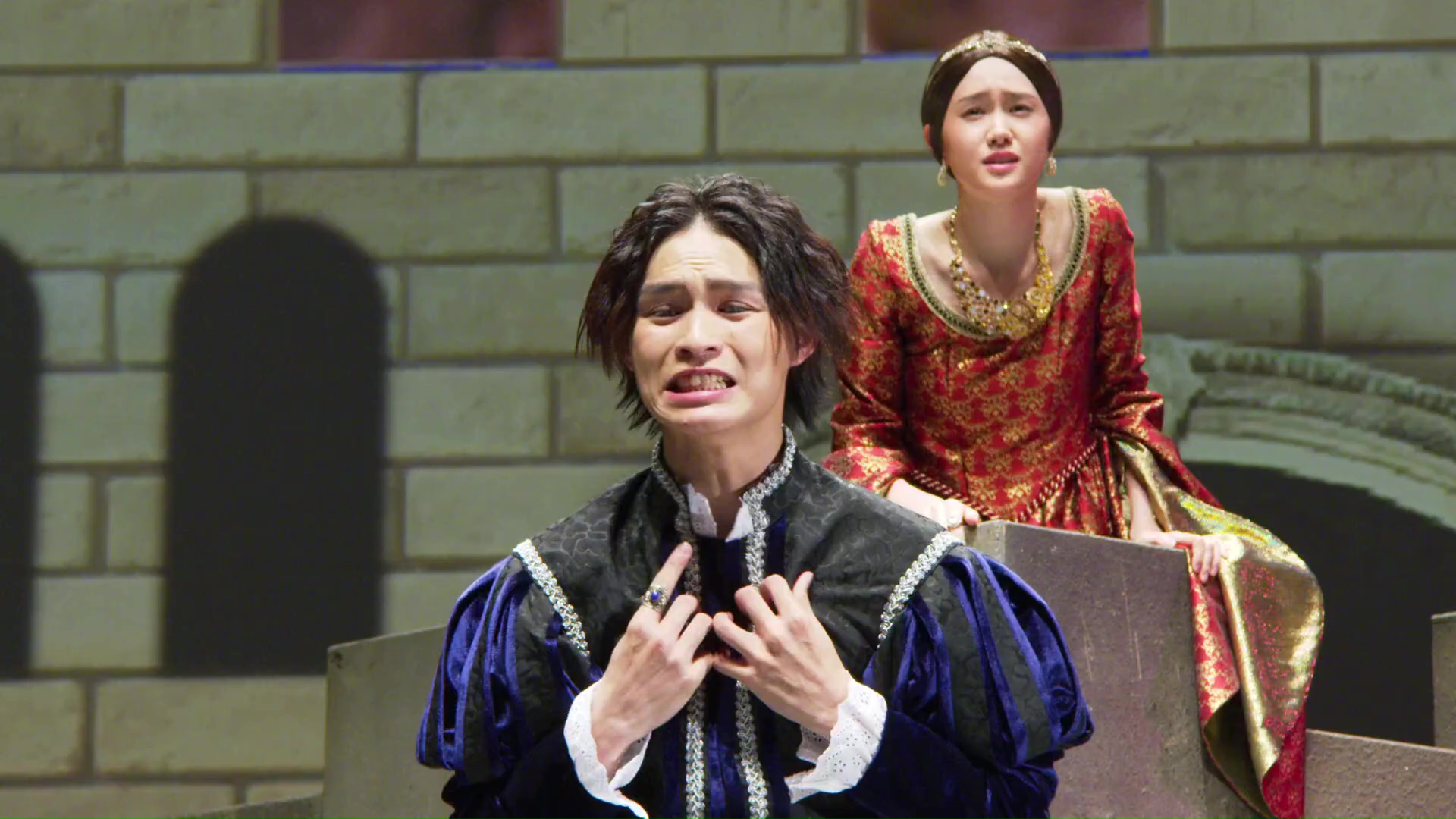 After reciting their lines, Canalo snaps out of it and remembers how Romeo and Juliet ends. Wiserue points out that the two main characters do indeed commit suicide in the end. And he is going to require his two stars to do that for real as well.

Canalo, who still has one of the energy drinks Papa Naohisa gave them earlier, has a plan.

Koh and Bamba can only go and try to search for the Minosaur. 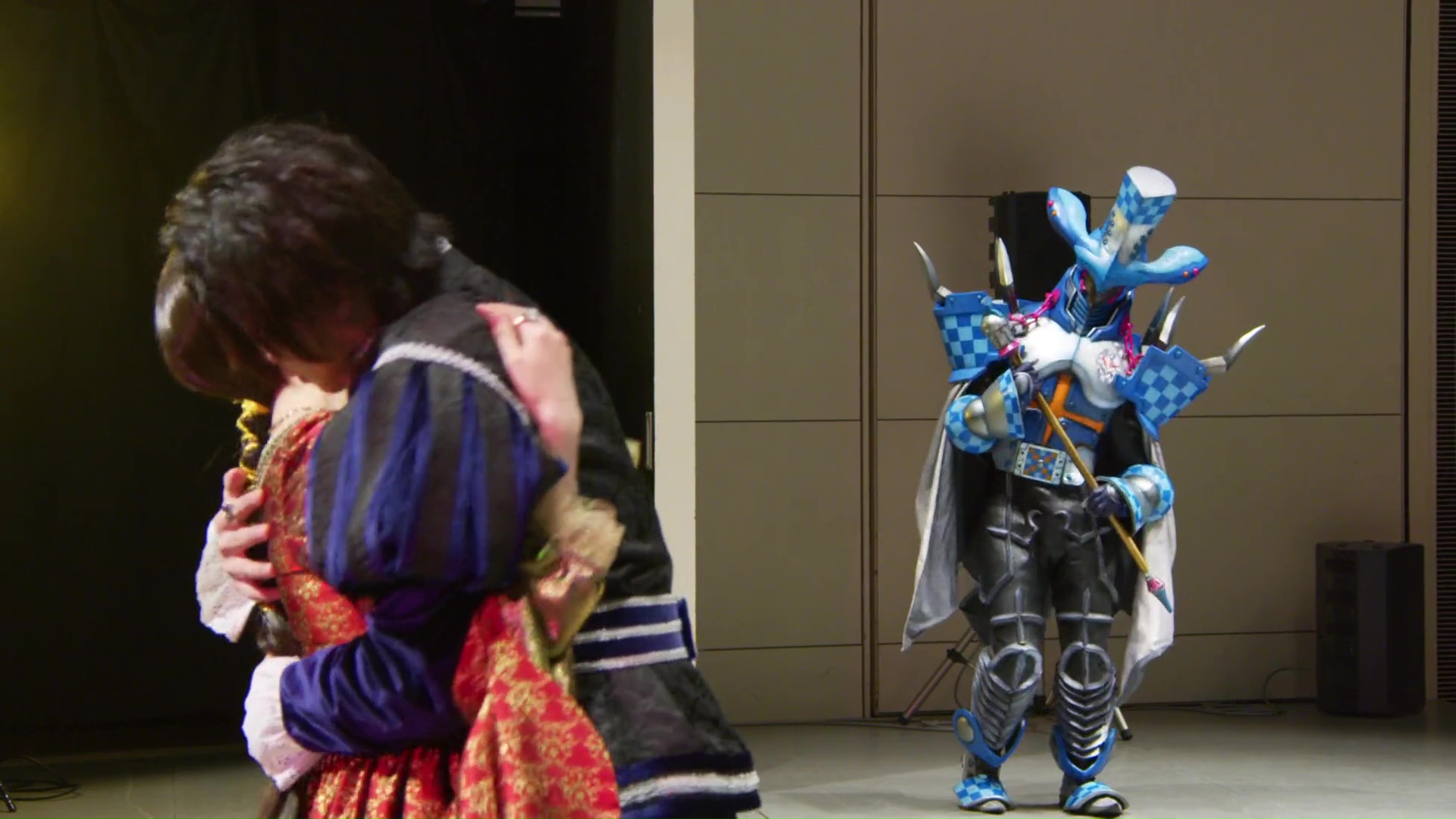 Canalo and Asuna continue with the scene according to the script. Asuna asks Canalo what they can do to get out of this. But Canalo grabs Asuna and takes her in his arms. Asuna tries to get him off her as Wiserue enjoys the show.

Koh and Bamba are able to find the hidden room where Kureon and the Minosaur are observing the production and ensure everything is going according to script.

They see the Minosaur birther unconscious on the floor. Kureon explains that the man dreams of writing the best play ever so they made him drink slime to help him out.

Koh and Bamba take on the Minosaur. Wiserue tells Kureon to hurry up and get them to the end of the act immediately. Kureon decides to rip out pages of the script instead of rewriting it since the Minosaur is preoccupied. 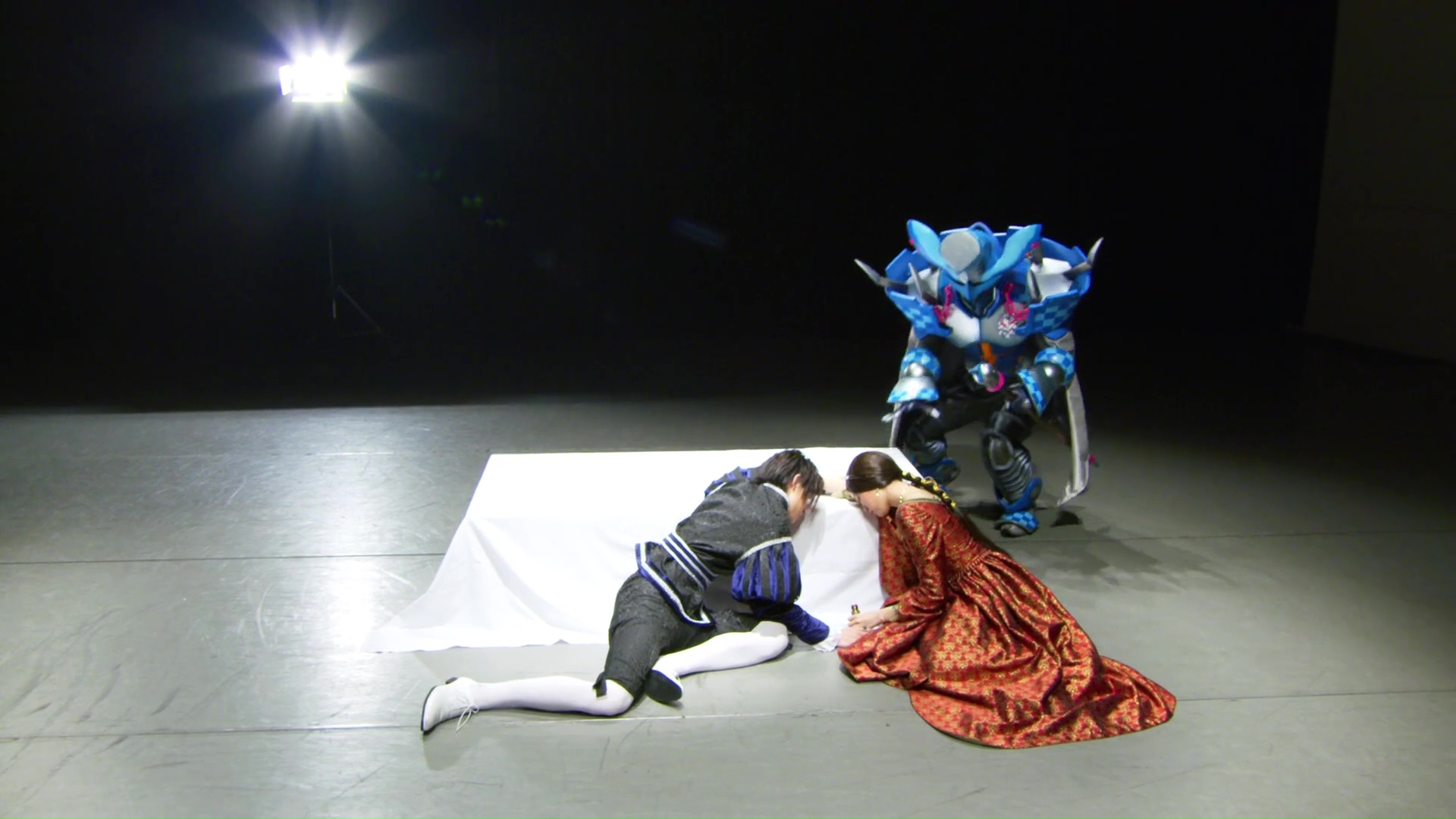 Canalo goes through his lines and drinks the “poison” energy drink which causes him to collapse, unconscious. JulietAsuna wakes up and finds the “dead” RomeoCanalo. She takes the bottle and drinks up, hoping to end her own life as well. She collapses.

Wiserue announces the death of the two lovers to wrap up the second act.

But Canalo and Asuna wake up from their hot pepper-induced coma. Asuna explains that Canalo informed her of the plan earlier while she was in his arms.

Wiserue can’t believe it. But Canalo says Romeo and Juleit is his bible and he lives by it.

Turns out Kureon ripped out the stage directions from the script which said for Canalo and Asuna to drink real poison. 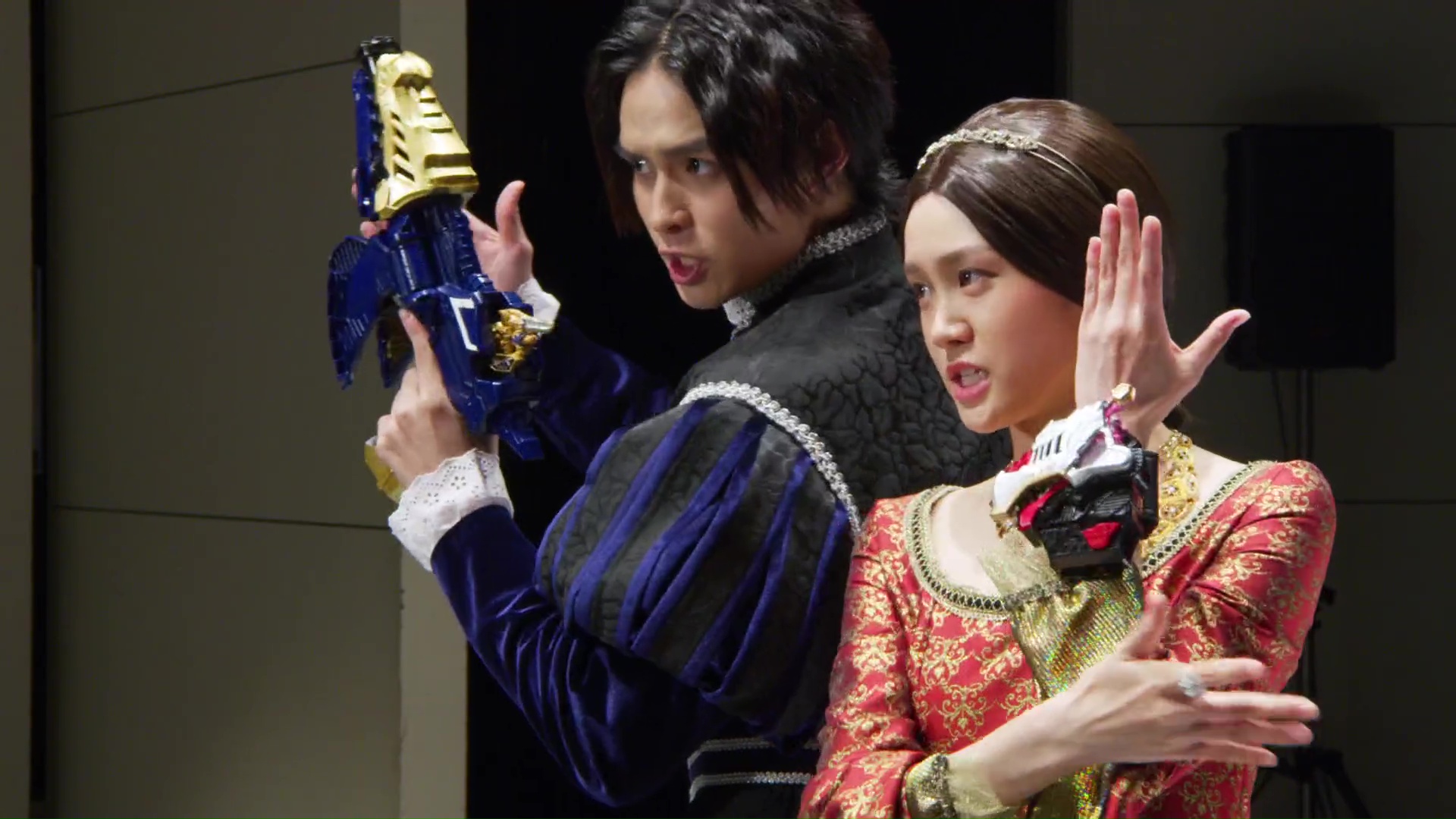 Canalo and Asuna henshin. But Kureon is able to drive the birther deep into despair, allowing the Minosaur to embiggen. 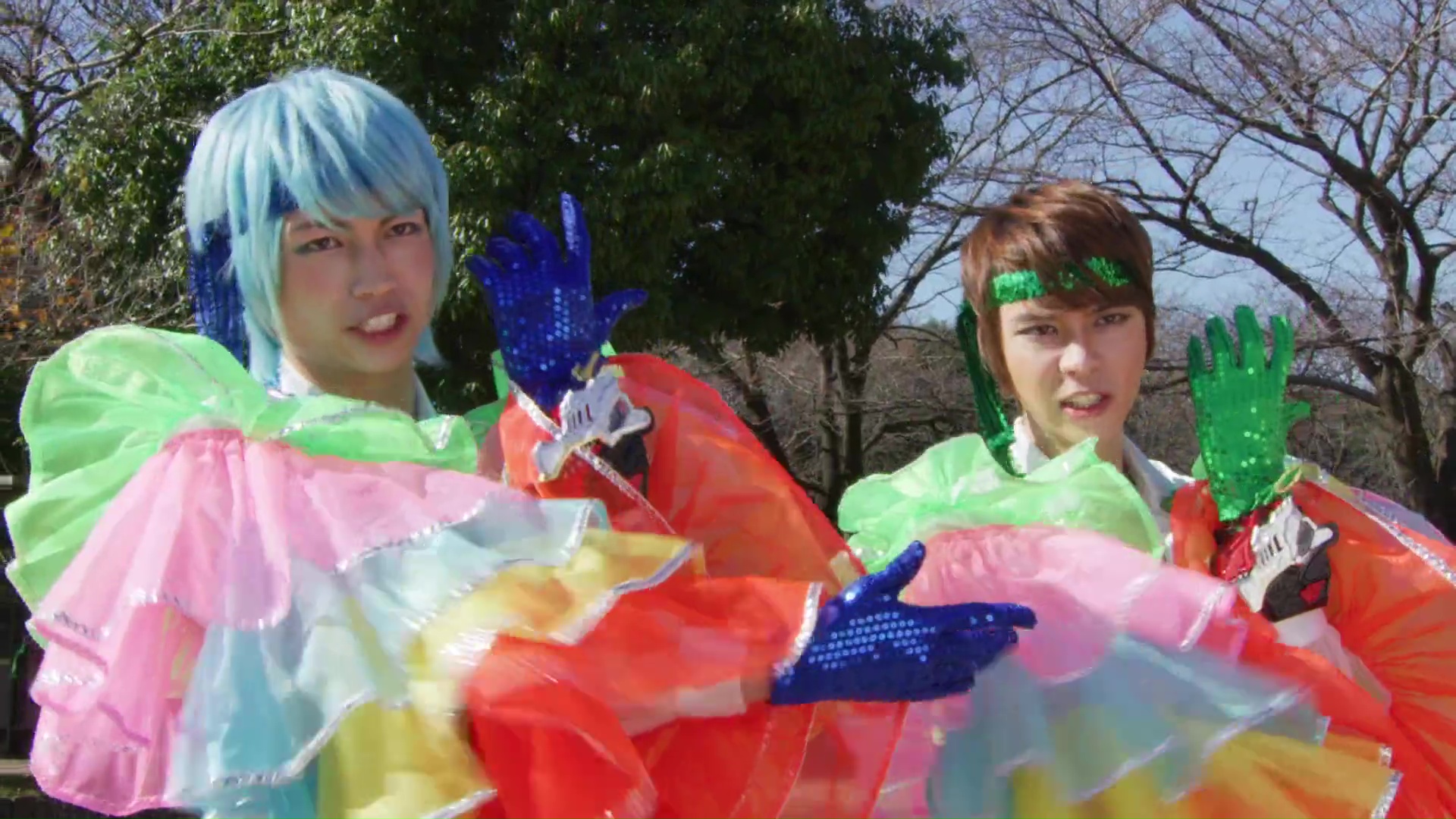 The Ryusoulgers meet a recovered Melto and Towa who also henshin.

But Wiserue shoots at them and says it’s time for the final act between him and Koh.

The others hop into their mecha to take on the embiggened Minosaur who is able to use its reel-to-real power to fight against them.

Meanwhile, Koh and Wiserue, with the help of Kureon and some Drunn crew members, stage the decisive duel on a set.

The Ryusoulgers form KishiryuOh Five Knights Black to finish off the Minosaur for good.

Back at the duel, Koh and Wiserue prepare their finishers. As the attacks hit, Wiserue is transported to an adoring crowd who gives him a standing ovation for defeating Koh.

But in the real world, it is Koh who wins the duel. Rain begins to fall on stage as Wiserue collapses to the floor. Koh approaches Wiserue, but Kureon runs in to protect and shield him.

Kureon says Wiserue might be an annoying weirdo sometimes, but he’s funny, accepts him and is who he belongs with. Kureon tells Koh to kill him first before going anywhere near Wiserue.

Koh dehenshins and says the duel is over. He walks away and reunites with the others outside.

Kureon cries over Wiserue who gives it everything to be able to stand on his own. He acknowledges that Koh is a better showman than he is. Kureon says that’s not true as Wiserue puts on the greatest show.

Kureon pleads with Wiserue to hang on, but Wiserue collapse to the floor and begins to glow. He says his role in this story is over and he transforms into a magic cloth which then disappears in the air as well.

What just happened? I don’t get it.

So why then did we get this episode where they present the idea that Wiserue’s life goal was to be the greatest showman ever so much that he would die for it. Like, yes, we know he likes to put on a show. But they made it seem like him putting on this three-act play was fulfillment for him so much that he comes to terms with his death.

This episode obviously has no connection to what we’ve seen not only last episode, but the last few episodes. So Wiserue and Kureon come up with this elaborate plan for what exactly?

I was honestly waiting for a big twist at the end and obviously it never came.

Needless to say this episode definitely disappointed me. It was a fun plot and amusing episode for a 20s or 30s episode. But not in the 40s heading to the finale. It felt completely irrelevant and almost like it was written by someone who had no idea who Wiserue was. Yes, Wiserue “died,” but in the most anticlimactic way and unrelated way possible.

I guess somehow you could connect Wiserue’s fulfillment with the season-long theme about self-worth and all that. (With the ending of the story, they chose Romeo and Juliet for a reason of course.) So perhaps the message is Wiserue was also having insecurities and mental health issues. But he was able to put on a show and he is fine with that.

I don’t think that was their intention with this episode at all. And that is quite a stretch to make. But I’ll take it if only to help me understand how this episode exists anyway.

I can understand Kureon’s mourning at the end for Wiserue even if he did feel underappreciated and bossed around. But this episode and plot really felt like it came from a completely different series.

There wasn’t any character or plot development for the Ryusoulgers. But it wasn’t really a good Wiserue or Kureon-focus either. And we assume Kureon is headed for his own big climax, even possible redemption story. But other than him being alone again, this episode did nothing to further his path either.

I also wondered if they were serious about Ui too and thought her leaving for America would play into the plot of the episode. But apparently the actress is sick =( Wishing Kinjo Mana a speedy recovery!

Overall, I am not a fan of this episode as it really has no place in the 40s and felt completely irrelevant and without purpose for both the Ryusoulgers and especially Wiserue and Kureon.

Recap: Kishiryu Sentai Ryusoulger, Episode 45 – Get Your Heart Back!

There was an issue retrieving stats. Please try again later.