Recap: The Amazing Race Canada 6, Episode 11 and Season Wrap-up – “Proud to be a Canadian!”

Recap: The Amazing Race Canada 6, Episode 11 – The Summer of Heroes

Teams fly to Courtney & Adam’s hometown of Calgary, Alberta. The next clue at the airport reveals the Road Block: Who likes to play it by ear? 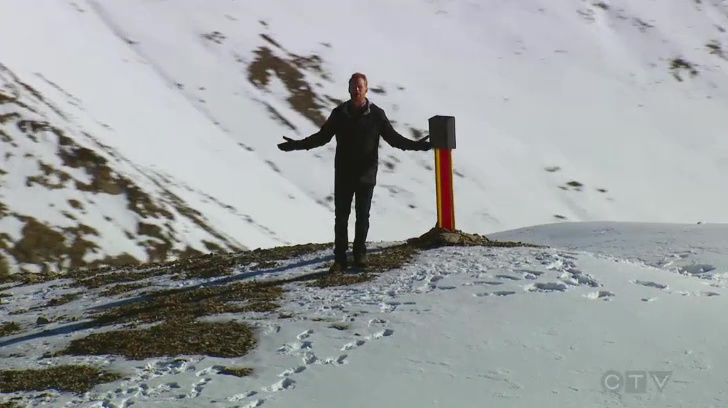 For this Road Block, teams will enter the ATC simulator at the base of the air control tower and listen to and memorize an ATIS transmission including the weather of the vicinity which they must relay to the head air traffic controller for their next clue.

Teams must now take a helicopter to Banff National Park. Kwame and Courtney are still at the tower when Taylor & Courtney arrive at the top of the mountain and find the next clue. They must make their way to Sunshine Village Ski Resort via helicopter.

Courtney finally passes and she and Adam hurry off. 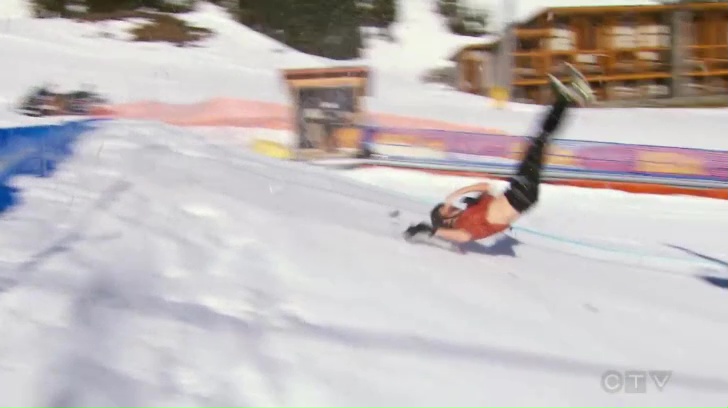 Taylor & Courtney land and hop into a taxi to the ski resort. They find the next clue, another Road Block: Who’s top dog? For this Road Block, teams will try skijoring, a sport combining skiing and dog sledding, for two laps. They will then sled down into the slush cup of icy water.

Taylor must complete this Road Block.

Back at the ATC tower, Kwame finally passes and he and Dylan are off in the sky as Courtney & Adam arrive on the mountain.

Taylor faceplants into the snow and he and Courtney make their way to Banff National Park Administration Building. Courtney & Adam spot Taylor & Courtney as they head in opposite directions on the gondola.

At the Administration Building, Taylor & Courtney open the next clue. They must now search the marked stores along Banff Ave for 22 souvenirs representing people, places and things, two from each Leg of the Race. There are multiple items available for each Leg. They will then display them in the correct order to receive the next clue. 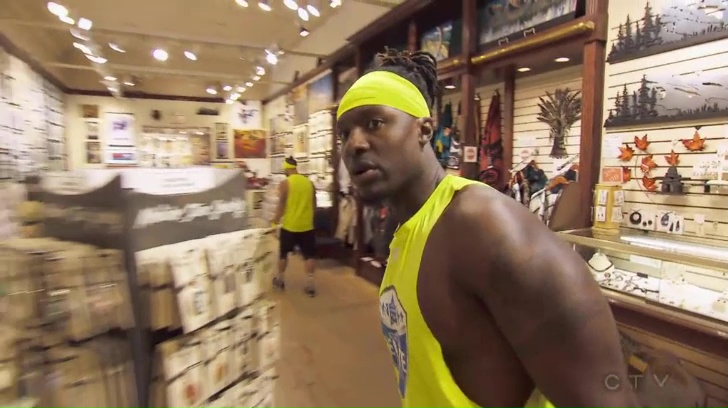 Courtney & Adam are incorrectly placing a zombie souvenir on the Mexico Leg. They replace the zombie with jai alai and then remove the Revolution Monument from Mexico and replace it with the zombies.

Adam realizes the mistake. They put the monument back and on their 11th attempt, they get the next clue. 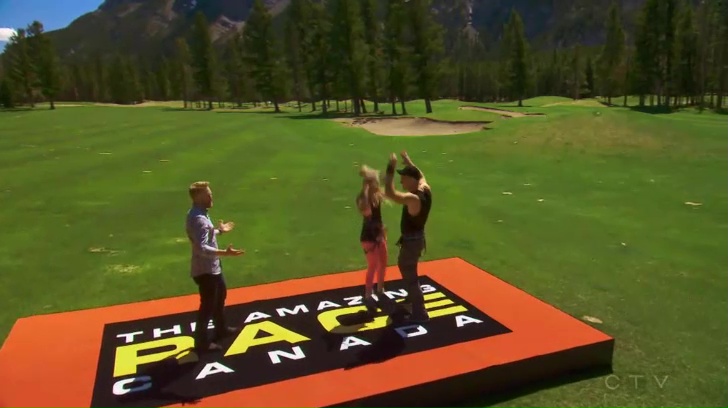 Courtney & Adam ask a golfer and realize they are on the wrong course. They must be at the Tunnel Nine course.

But it’s Courtney & Adam who cross the Finish Line first. Jon officially declares them the winners of The Amazing Race Canada: Heroes Edition.

Taylor & Courtney are 2nd and Dylan & Kwame are 3rd.

Well that was such a horribly designed, very linear Final Leg. But it did have a pretty good outcome. Lol

Banff is definitely a location that should’ve been visited a few seasons ago. But I don’t know that it has enough to do for a Final Leg. Well, it didn’t have enough to do. This was a very barebones Final Leg that really kind of lacked real thrills and excitement that a Final Leg should have.

I think without Taylor & Courtney’s mistake at the Final Task, this would’ve been a very uneventful finale decided after the first task. The helicopter rides also kind of contributed to how linear the Leg was.

The first Road Block was alright. It’s a straightforward memorization task in a fresh location. And obviously, the location worked logistically to get teams immediately into the helicopter.

The Route Marker at the top of Mount Fable was all for the great scenery, but not much in terms of Racing.

The second Road Block was also very processional and would’ve been a much better task on an earlier Leg. They really should’ve done something a little more physically demanding for the second Road Block. Faceplanting into the snow isn’t enough lol

Finally, the Final Task was pretty good. It looked a little like a TARPHDME Final Task lolol The best part is that there are a lot of different possible combinations and solutions since there’s more than two possibilities for each Leg. That definitely makes things a little easier in terms of the needle in a haystack aspect. But it makes it more difficult if you didn’t take notes like Courtney & Adam did and you mistakenly take more than two from one Leg and not enough on another.

Still, the task itself was fine. But certainly not the most exciting thing to do on a Final Leg. The edited footrace at the end definitely felt forced and a typical TAR Canada-style Pit Stop faux footrace.

For the season overall, it was alright. Nowhere near as offensive as TARC4 or TARC5. And the cast actually helped make this season a little more interesting than last year’s.

It’s also important to note right at the top that this Heroes Edition and last year’s #Canada150 season have probably been the two least xenophobic and nationalistic seasons of TAR Canada so far. You definitely wouldn’t expect that. Especially with one less international Leg this year instead of more than last year’s three.

But even as the Canadian Legs get more and more tired and recycled, this season was actually alright.

Jon’s comment at the start of the season about teams all getting along with each other, the MOST of any season ever before, was very scary. lol The implication being that competition would be nonexistent and all these “heroes” would be helping each other and positive 24/7. No drama, no competition. Just a bunch of good people having fun.

That’s certainly not the most exciting idea. But thankfully, Jon overstated that and the season was actually okay in terms of competition.

The barebones Legs and poor Leg design (because of lack of interesting and fresh tasks in Canada) didn’t do much. But the teams themselves and their varying degrees of Race acumen did keep things reasonably enjoyable.

The best Legs were obviously the Indonesia and Mexico Legs. There really is just something great about international Legs. There’s a different kinetic energy to these Legs that unfortunately are not present on the Canadian Legs. And if any TAR Canada cast deserved more international Legs, it’s this cast of heroes.

Anyway, if I were to rank TAR Canada seasons, I’d have to put Season 1 and 2 at the top then Seasons 5 and 6 in the middle and Seasons 3 and 4 at the bottom just because of various unlikeable and gross aspects that I’d rather not remember. lol

My Subjective Team Rankings for the Season

I think this was an above average cast for TAR Canada. There weren’t any hateful teams like in the past and there may not have been confrontational drama. But they were all pretty competitive in their own ways. And that’s even with Taylor & Courtney winning half the Legs.

My favorite team from this season is definitely Martina & Phil. Legit All-Stars, no question. They were underdogs who became contenders and with great, very likeable personalities to boot. I would definitely love to see Phil and his Martina noona Race again in the future.

I was definitely skeptical about Nancy & Mellisa at first with that “We barely know each other” stuff and Mellisa being friends with Jon. But they really were a great and fun team to watch. Definitely one of the most competitive teams this season and definitely another team I’d love to see back in the future. Dylan & Kwame were another fun team. They definitely knew to step it up week after week. They started off very slow, but were able to climb up and make it to the finale.

Like I said last week, Courtney & Adam‘s bottomgodessing was either going to end with a win or 3rd place loss. And it was indeed a great darkhorse win. They’ve escaped many times season (though not by way of Non-Eliminations! Take note of that!). But they stepped it up at the right time and had great momentum going into the Final Leg. They started off kind of annoying with all the kissy-faces they made. But they soon became a much fuller and more enjoyable team as the Race went on. You definitely saw they were competitive and would never give up despite regularly making mistakes or encountering bumps along the way. It was a good win.

Leanne & Mar were a very strong and relatively consistent team. They had some missteps, but when they were “on,” they were a team to beat. Their elimination was unfortunate, but they were otherwise a great team. Taylor & Courtney were also a very strong team and certainly the top contender for much of the Race. That kind of dominance can get boring and unexciting which is why I wouldn’t have been the most excited to see a win from them. Still, they had some fun moments here and there.

The rest of the teams were alright too. But the early episodes really didn’t give much from them to really give any other impression but them being nice people. Zainab & Monica, Joseph & Akash, Chewy & Happy and Todd & Anna were all fine people with nice stories. But judging from their Racing, they all went at the right time. Except for maybe Todd & Anna. Joseph & Akash really had some of the worst luck of any team on TAR Canada. But Todd & Anna had the makings of a strong contender. But, the Race can get tricky at times and they unfortunately fell victim to that unpredictability.

Kwame: “It truly made me proud to be a Canadian!”