Nariaki explains that Blood Stark saved him from the river after Gentoku shot him. But now, he works as a representative of Nanba Heavy Industries. Gentoku says fine, but he wants Nariaki to explain how Hokuto was able to establish their own Faust and use Hard Smash.

Nariaki says he cannot answer that question. Gentoku is upset, saying Faust was his and Katsuragi’s creation.

Nariaki asks him to leave.

Over at Café Nascita, Misora and Sawa are bandaging their men up while they contemplate how Grease could be so much stronger than them. Ryuga says he just has to gain the same amount of experience using the Sclash Driver. Sento says it’s dangerous for Ryuga as it puts a heavy strain on the body while drawing out his fighter instincts.

Sento says he found a hidden command in Katsuragi’s data that could be a power up for the Build Driver. But he can’t figure out how to access it. Ryuga doesn’t want to waste any more time and vows to defeat Grease next time they meet.

Sento says they are fighting not to defeat an opponent, but to protect Touto. 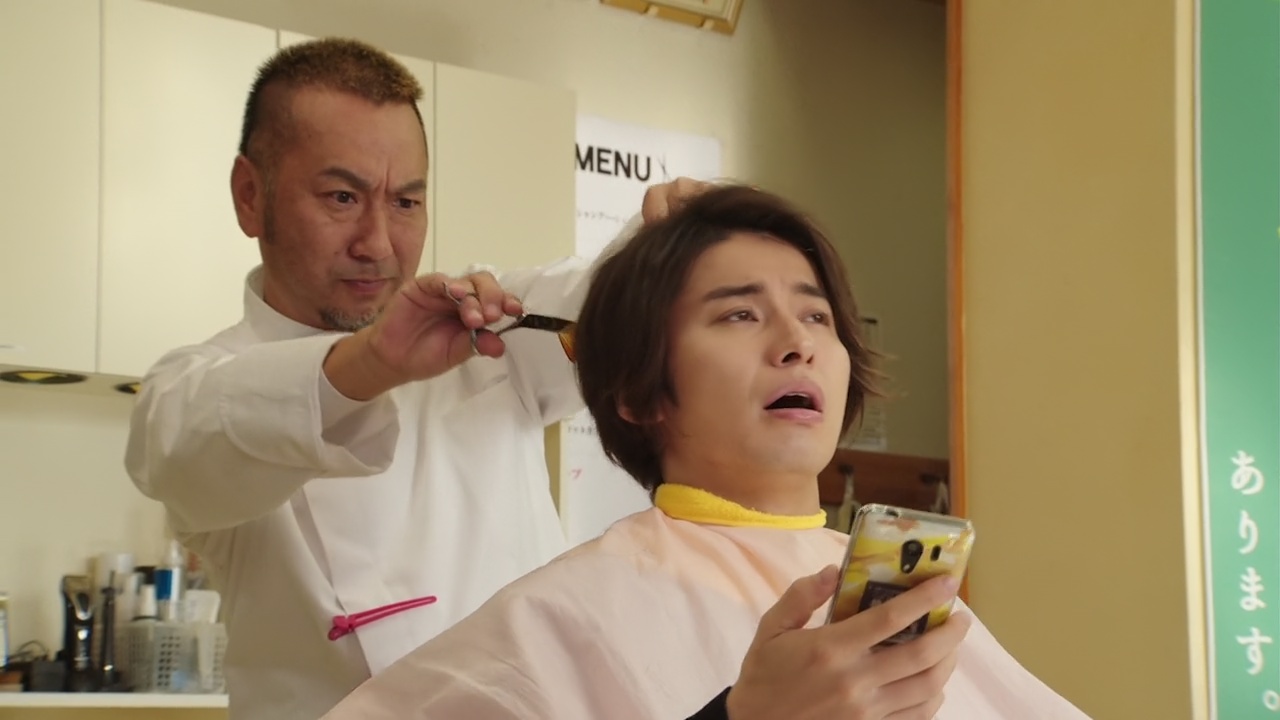 Touto is still a total warzone. Kazumi is at the barber getting a haircut while trying to figure out why Miitan was with the Kamen Rider. Akaba suggests Miitan is Build’s girlfriend. Kazumi doesn’t even want to joke like that.

Aoba and Kiba arrive and say they weren’t able to find Build.

Sento and Ryuga report to Gentoku who tells them about Nariaki and how he must have been the one who created the Sclash Driver for Hokuto. Gentoku says Nariaki was a gifted scientist before he became his secretary.

Sento wants to know the keyword for the hidden command in the data so they can get the power up they need. Gentoku remembers Katsuragi mentioning a forbidden item.

But their conversation is interrupted when Kazumi and the Crows attack the building. Sento and Ryuga hurry out.

Kazumi wants to know one thing… who is Miitan to them?

Kazumi is relieved and The Crows are happy for their boss. But that gives Sento and Ryuga time to henshin.

Sento takes on Kazumi while Ryuga handles The Crows. But Kazumi’s powers are too much for Sento. Kazumi turns his attention to Ryuga, but Blood Stark appears.

He says Sento has let Ryuga pass him and it’ll be hard to stop him. Anyway, that’s enough fun for today. He says it’s time for Kazumi and The Crows to retreat for now.

Sento and Ryuga dehenshin. Ryuga suddenly falls to his knees, but he insists that he is fine.

Back in Hokuto, Kazumi and Soichi are meeting with the prime minister. She points out that Kazumi doesn’t seem like he’s equipped to finish the job, but he insists his Hazard Level proves that he does. Soichi says that Ryuga is growing stronger faster than anyone else and it’s only a matter of time before he surpasses Kazumi.

Kazumi is willing to upgrade his body, but Soichi says that’s not possible for him. He shows Kazumi a device that will allow The Crows, however, to do just that. But if they are defeated, they are dead.

Kazumi refuses to subject The Crows to that. The prime minister warns that if Kazumi cannot obtain the FullBottles or Pandora’s Box, he is fired.

Kazumi says not to worry. He leaves.

The prime minister calls out The Crows who’ve been listening to the whole conversation and offers them the power up. 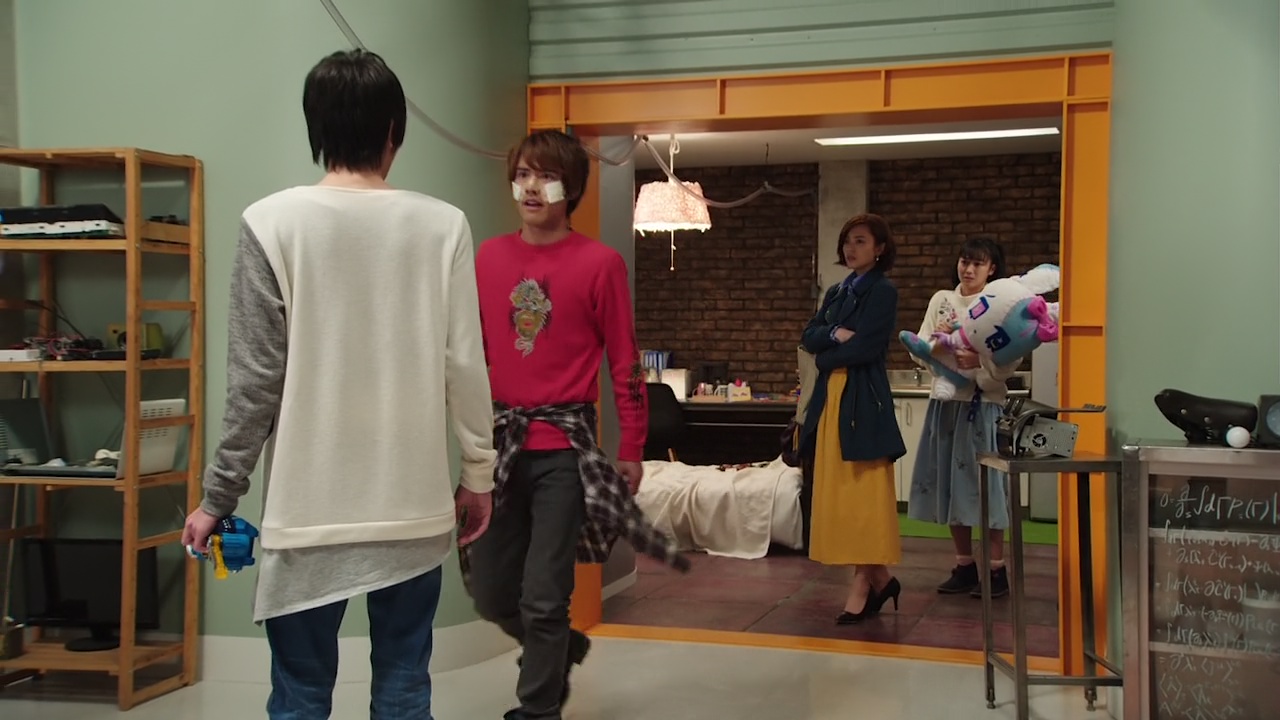 Back at the lab, Sento says he and Gentoku have agreed to spread out the FullBottles over different locations to keep them safe. Sawa arrives with information on Kazumi and the others.

Sawatari Kazumi owns a large farm, but the Skywall affected its soil, thus devastating the farmers who worked on it. The Crows were three of those farmers.

Kazumi had taken care of their families out of his own pocket. And when they really ran out of food, Kazumi volunteered for the experiment that turned him into Grease.

Akaba says he is grateful Soichi was able to also make use of them three.

This is while the three of them get the upgrade Kazumi had been unwilling to subject them to.

Sento feels they too are victims of the war, but Ryuga says it doesn’t change the fact that they are responsible for the destruction of Touto. Sento grabs the Sclash Driver and points out how it is already damaging Ryuga’s body.

Ryuga thinks Sento is just jealous of his strength. He takes the Driver and leaves, saying he will defeat the Hokuto forces himself.

Misora finds Ryuga at the empty children’s park. All the streets of Touto are empty as people fear getting caught up in the fighting. Ryuga says children not being able to play at the park is just wrong.

“He must be thinking the same too,” Ryuga says. He points out that Sento hasn’t smiled much lately, but it’s understandable since Sento feels guilty about causing all of this.

“That’s why I want to end this war as soon as possible.” Ryuga admits he is doing this for Sento since he’s learned a lot from him. If he hadn’t met Sento, he would’ve lost the ability to trust in anyone. But this time, it is his turn to help Sento.

“You’ve really grown up,” Misora says with a smile.

Back at the lab, Sento receives a call from Gentoku about the garbage plant (one of the secret FullBottle locations) being under attack. He hurries over as Kazumi has found the FullBottles.

Sento and Kazumi henshin. They battle. Kazumi drops the two FullBottles he just obtained and Sento uses them to Build Up to Phoenix Soujiki.

Sento then goes Sparkling and is able to send Kazumi flying out of the plant. Just then, The Crows arrive and happily show Kazumi that they are now Hazard Smash. Kazumi is upset, but The Crows proceed to easily knock Sparkling Sento around.

Ryuga comes running. He henshins and engages Kazumi. Sento calls Ryuga an idiot for using the Driver again. But Ryuga says he will continue to do so and become even stronger.

The Crows take advantage of Sento being distracted and force him to dehenshin, dropping his FullBottles. The Crows pick them up and Kazumi says it’s time for them to leave. He uses a Helicopter FullBottle to fly them out of here.

Sento says Ryuga’s body is at its limit, but Ryuga uses the Taka FullBottle anyway to give him wings to fly after them.

But the power is too much for Ryuga’s body again. Misora and Sawa have followed him and quickly hurry over when he falls to the ground.

A strange surge comes from Misora when she touches Ryuga. It seems to be coming from her bracelet. She touches Ryuga again and it heals all his injuries. He quickly pops up, perfectly fine. But Misora collapses and falls unconscious.

Pretty good episode. I definitely liked the peek into Kazumi’s (and The Crow’s) backstory a little bit. And the simple explanation of Nariaki coming back from the (not so) dead.

But my favorite part has to be seeing more of the Sento-Ryuga (and Misora) connection. They’ve all certainly grown since we first met them and it’s thanks to their effect on each other. Ryuga wanting to be the one that helps Sento now is perfectly in his character and a logical reversal considering the situation.

I also enjoy Misora and Sawa just speeding around helping the guys.

Back to Kazumi though, I think it is very interesting that his backstory is so simple and based in a very grounded and un-fantastical setup. The Skywall affecting the farmland and in turn the farmers who work on that land is such a tangible situation, so it’s easy to connect to and understand. It also gives a nice human element to The Crows. Though of course, there’s still plenty of mystery left to unfold.

And with Nariaki and Gentoku, it was interesting to hear Gentoku refer to Faust as basically his and Katsuragi’s baby. Though maybe nothing new there since Gentoku has been eager to engage in war. But this could definitely play into whatever Katsuragi might have been feeling that we haven’t seen yet.

But anyway, overall this was a pretty good episode. Lots of plot developments, but again, I enjoy the character developments a lot more. Been great so far.

Recap: Kamen Rider Saber, Chapter 2: The Water Swordsman, Along With a Blue Lion.

Recap: Kamen Rider Saber, Chapter 1: In The Beginning, There Was a Flame Swordsman

Recap: Kamen Rider Zero-One, Episode 45 – “A Rider Kick to the sky turns to take off toward a dream.” + Season Thoughts