Recap: The Amazing Race 30, Episode 2 – “This has to be demoralizing.”

All teams get to their next destination, Antwerp, Belgium via Amsterdam and are given their next clue at a chocolate shop.

That clue reveals the Road Block: Who’s ready to get high?

For this Road Block, teams must to SkyClimb where they will climb a 100-foot long ladder hanging from a crane to retrieve their clue at the top.

Cedric & Shawn, Trevor & Chris, Cody & Jessica and Joey & Tim are the first four teams to complete the Road Block which has four slots per round. Henry & Evan, April & Sarah, Lucas & Brittany and Kristi & Jen are next. Alex & Conor and Eric & Daniel are the last two teams.

Cedric & Shawn are first to finish and head to Grote Markt where they learn of the first ever American Double Battle Face-Off Duel Duel Head-to-Head. A member from each of the “highly competitive teams” will race around an obstacle course dressed as french fries (or frites) while pushing a dolly of frozen frites. The winner of each Head-to-Head will be able to check in at the Mat. The loser must face the next team. And the last team to lose will automatically be eliminated.

Cedric & Shawn dress up as Jessica & Cody arrive. The first Racers to go Head-to-Head are Cedric and Cody and Cody wins the first frites Race. He and Jessica can step on the Mat and they are officially Team #1, winning $2500 each.

As Eric & Daniel decide to switch Detours, Shawn and Henry are next to go Head-to-Head. Henry struggles, allowing Shawn to win and he and Cedric check in as Team #2.

Evan switches with Henry to go Head-to-Head against Kristi. But Evan also has trouble and Kristi wins. Kristi & Jen check in as Team #3.

Henry is back for the Head-to-Head. But he continues struggling as Chris speeds past him and easily wins. He and Trevor are Team #4. Next up are Evan and Alex. But Alex has no problems winning this one. He and Conor take 5th. Henry loses to Lucas who checks in with Brittany as Team #6. Evan loses to Tim who finishes with Joey as Team #7.

Henry manages to beat April and he and Evan can safely check in as Team #8.

Eric & Daniel arrive next. Sarah says April should do the Race instead of them swapping since April was able to do the course without messing up. But that seems to be the wrong strategy since Daniel beats April.

Eric & Daniel are Team #9 and April & Sarah are eliminated. 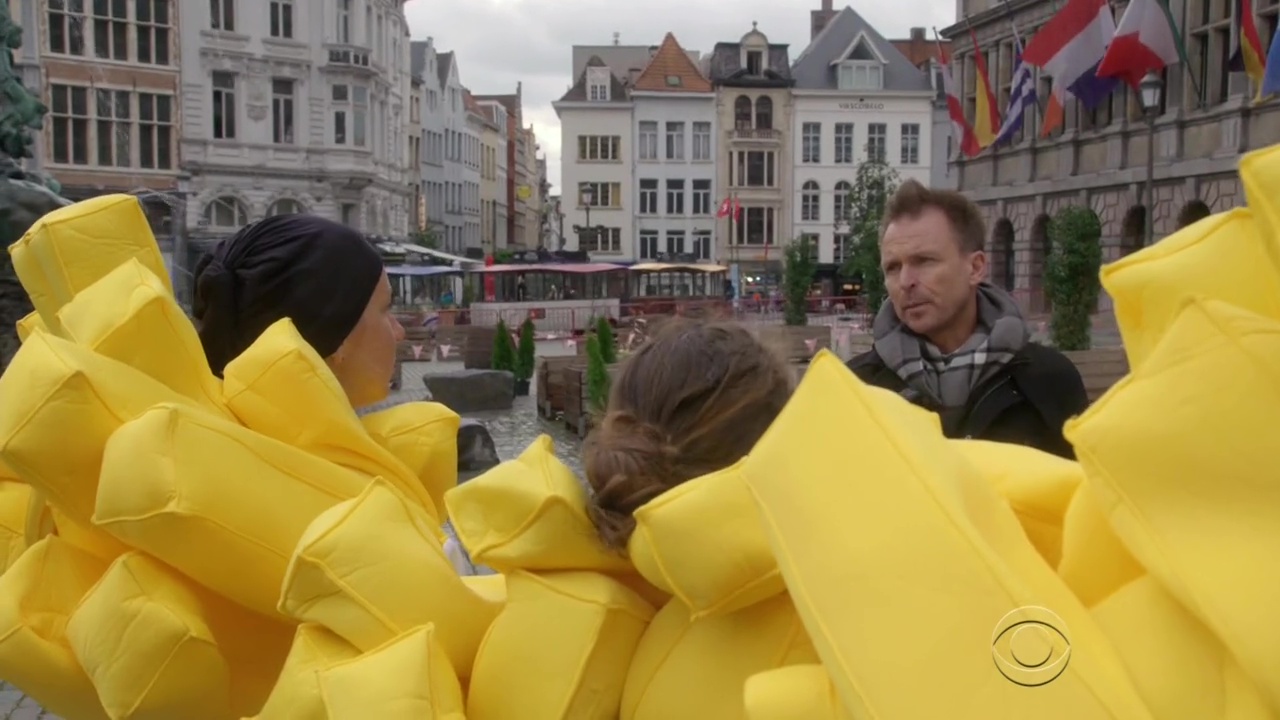 Even with the worst actual task used for this Amazing Race twist that I have seen, which was the 100 meter sprint on The Amazing Race Philippines 2, Zarah & Osang who lost actually would have been spared elimination had Manila not experienced a tropical storm and flooding that night. They had an opportunity to fight their way back and almost did.

So while the actual task here, the Frites Race, was much better than any of the TAR Canada sports Face-Offs and more in line with the kinds of quirky tasks Israel’s Double Battles usually are, its placement and actual use as the Eliminator of this leg was completely absurd. And again, I know I’m not the only person who will say that this was the worst implementation of this Double Battle/Face-Off/Duel Duel that I have ever seen on any Amazing Race around the world.

I get that they wanted to add the curiously named Head-to-Head (why not use any of the existing names?) to the season to help bolster the claim that it is the most competitive cast ever. But even after a fuller second leg, I still don’t see very much competitiveness.

That first Road Block had only 4 spots per round and really that could have even worked as a Head-to-Head as well. And it would have been perfectly placed at the beginning of the Leg. It was a straightforward task, but again I see that having four teams go at it at the same time like that was all with the intention of fostering the “competitive” nature of these teams. But really it only work to separate the teams into groups, with the hopes of spacing teams out arriving at the Head-to-Head.

The Detour is the best part of this leg. Both sides of are very challenging and tedious, but definitely great thinking tasks. Still the Detour would have been better if paired with more exciting tasks this leg.

Ending with that Head-to-Head really sucked the life out of whatever little true excitement this Leg potentially had.

Anyway, it’s very interesting to see Phil get an increased presence on the episode. What with all the extended explanations and history lessons and facts. It’s good to see more Phil. But his commentary at the Head-to-Head was just so forced and unnecessary.

Oh and take a look at this lack of quality control:

Interesting cold open to get that all out of the way before the opening credits and then start right with the Leg in the destination city after.

Overal, this was an okay episode. The Head-to-Head’s debut on the American Amazing Race was a complete bust. And the show hasn’t been living up to its most competitive hype yet. But it was alright.

Not really much of a change this week. I think I learned less about teams this episode than in the premiere which is kinda crazy. It’s too bad about April & Sarah. I wanted to see more passive aggressive bickering. But what could they do with the Head-to-Head.

Recap: The Amazing Race 2, Episode 10 – “I wanna fill your mouth with socks so you can shut the hell up.”