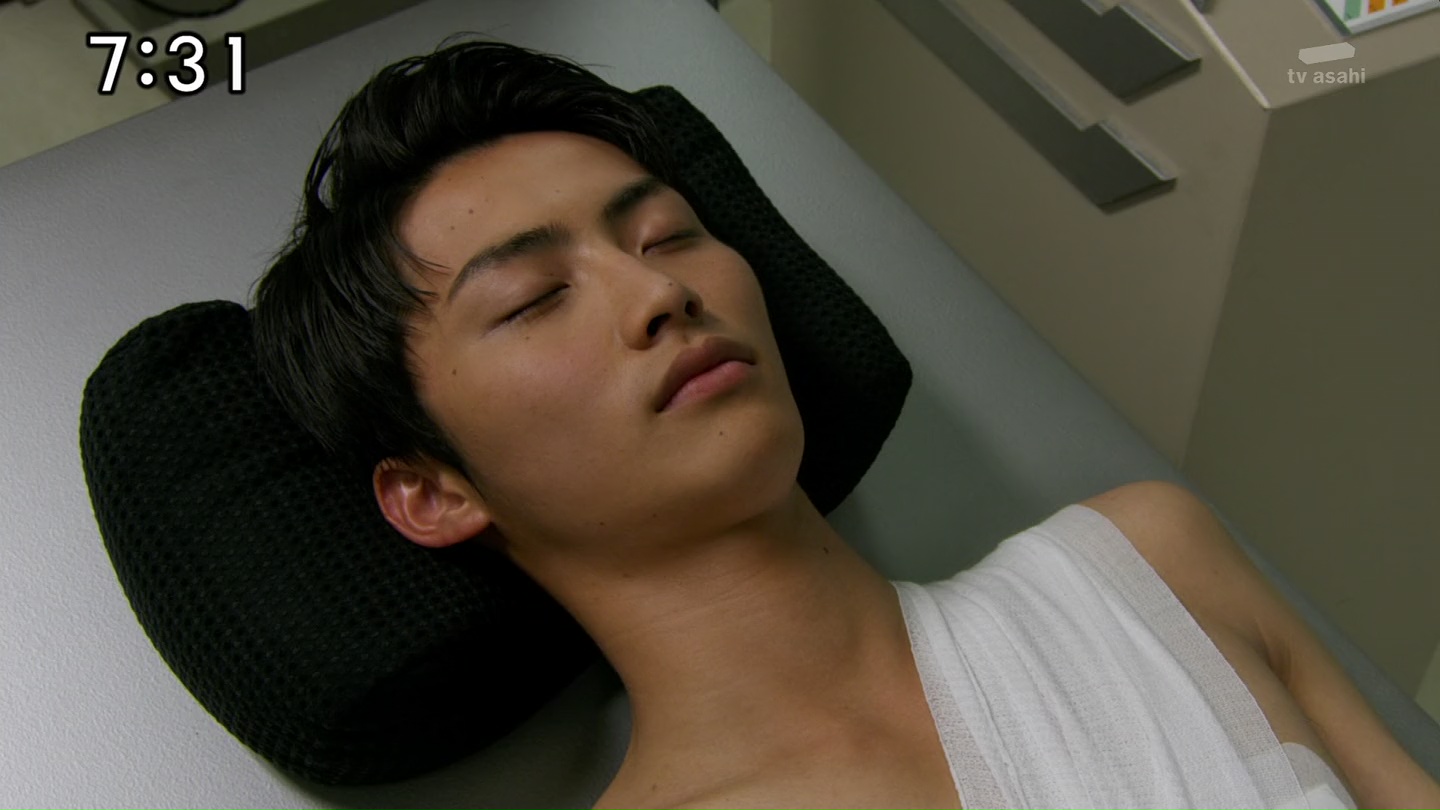 Tsurugi shoots at Don Armage, but he sends it right back, forcing Tsurugi to demorph as well. It’s time to retreat so Orion blocks a finisher from Don Armage long enough for them to escape. 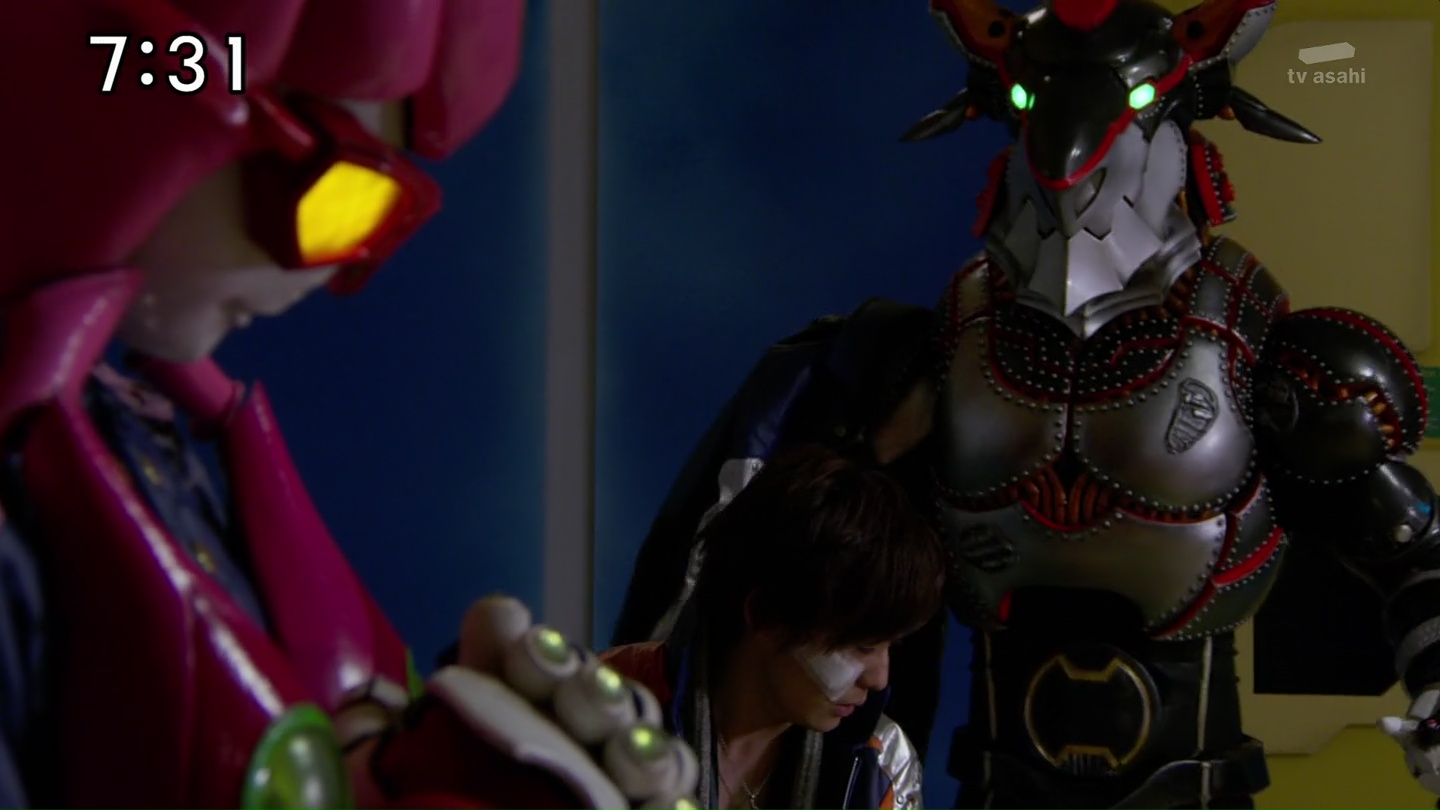 Back on The Orion, Commander Ronpo tells Orion to get his wound looked at, but he says it’s fine. Raptor and Spada return to the bridge after getting Lucky settled in the medical ward and says all they can do is wait.

Tsurugi says they have one more option. Orion looks at him, worried and decides to go check on Lucky. Away from the others, he looks at his wound and sees that it is really bad.

Tsurugi follows Orion to Lucky’s bedside. Orion knows Tsurugi wants to use the Houou Kyutama to save Lucky, which holds some kind of danger for him. But Tsurugi says Lucky is important in their upcoming battle.

Before Orion can finish, Kukuruga and Indavers are quickly approaching The Orion. Tsurugi says they must launch The Orion immediately as they are in no condition to fight. But Raptor says The Orion’s fuselage must be repaired before they can.

Commander Ronpo orders the others to fend off Kukuruga and Co. to give Raptor time to do the repairs. Orion wants to join the Kyurangers, but Commander Ronpo asks him to stay behind. They cannot risk him dying in battle, otherwise the future will be changed and no one will exist to tell the story of the legendary saviors. That means the Kyurangers would never assemble.

Tsurugi says he would never be able to face Orion’s wife and child “in the Leo System” either if he died.

Tsurugi, Champ, Spada and Stinger head out and take on Kukuruga and the Indavers.

Commander Ronpo goes down to where Lucky and Orion are. He asks Orion just what Tsurugi’s plan to save Lucky is. Orion explains that Tsurugi will use the Houou Kyutama, but that might cost Tsurugi his own life.

Tsurugi and the others are able to force Kukuruga to retreat. They head back to The Orion.

But Orion says using up its power might mean there not being anything left to sustain Tsurugi’s life.

Just then, Lucky comes stumbling into the bridge and refuses to have anyone sacrifice their life for him. Tsurugi says he does not plan to die, nor will he let Lucky die either. He’s taking a gamble, emboldened by the idea that past and future legends have been able to team up to save the galaxy.

They bring him back to the hospital ward. Commander Ronpo comments on what a peculiar man Lucky is that people would be willing to take a gamble on him.

Tsurugi and Orion are with Lucky. Tsurugi says he’s never met a man whose positivity alone can bring him good luck. This is the man who could save the galaxy. Orion says that would be a miracle. Indeed, Lucky is a man who creates miracles, Tsurugi says.

Orion says it means a lot coming from a man like Tsurugi.

Tsurugi points out the great power that was awakened earlier when they were battling Akyanba. Lucky was also born in the Leo System. And he was able to come from the future to meet Orion. What does this mean? A miracle has already begun.

Tsurugi vows to save Lucky and asks Orion to create that immense power one more.

The alarm sounds as Kukuruga returns, but now accompanied by Don Armage.

Commander Ronpo orders Tsurugi to begin with the Houou revival process. Orion steps up and says he wants to fight alongside them. Because if they’re all killed here, it won’t matter if he survives as the galaxy will be over.

They deploy and morph. The battle begins as Tsurugi struggles to use the Houou Kyutama’s power for Lucky. He takes his shirt off and gives it all he’s got.

Don Armage delivers a major blow at the Kyurangers which Orion cannot block. They are forced to demorph, but they refuse to give up.

Just then, Lucky appears, good as new. He thanks them for waiting. Tsurugi is back at The Orion with Raptor, also fine.

Orion asks Lucky if he believes in his luck, even this situation. Of course, Lucky says, especially with what they all have done to support him and get him back on his feet.

Just then, a bright glowing orb appears. Orion says Lucky has the blood of the Orion and Leo constellations in him. Lucky is a descendant of Orion’s. So now, Lucky can use the power of both. 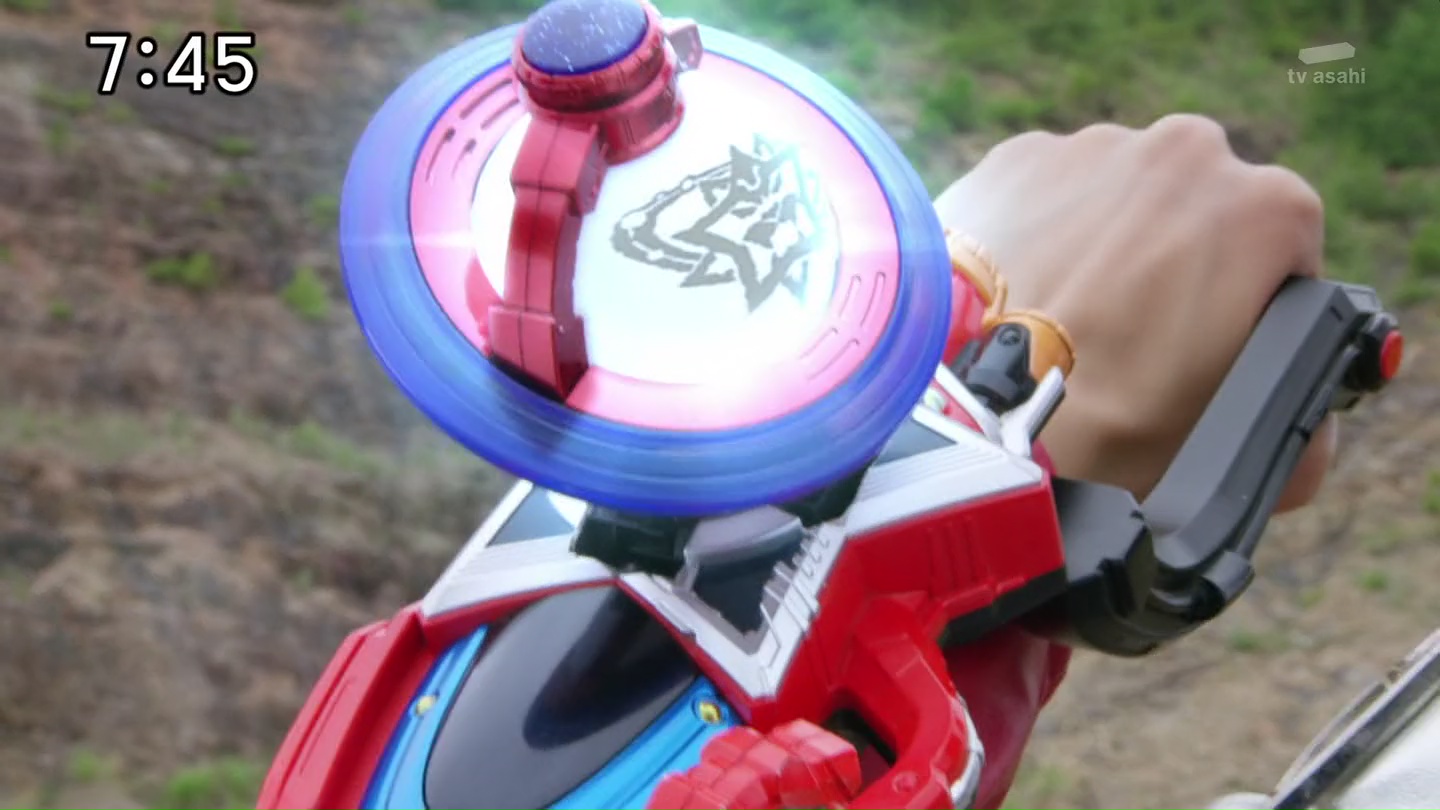 Lucky grabs the new Saiko Kyutama and uses it to morph to ShishiRed Orion.

“It doesn’t mean anything to us that you just changed your pajamas!”

But Lucky’s new pajamas have incredible new power. He kills Kukuruga with one flick of his cape. Don Armage will not have any of this. He revives his Vice Shoguns and they embiggen.

Raptor says repairs of The Orion are done. Lucky tells Commander Ronpo to take care of Shishi Voyager. The others all morph and hop into KyuRen-Oh and Gigant Houou.

Lucky and Don Armage continue their battle on the ground.

Orion falls to his knee as he watches. “I’m counting on you… Lucky.” He closes his eyes.

Lucky is able to use the power of all the Kyurangers’ main weapons and sends them flying at Don Armage. Lucky refuses to be defeated by Don Armage and uses the power of Orion, Tsurugi, all the fallen warriors and the new legendary saviors to deliver an All Star Galaxy Infinish Blast at Don Armage.

The rain falls as the Kyurangers are shocked to find Orion on his knee, dead.

Lucky proudly says they won and the galaxy is saved. 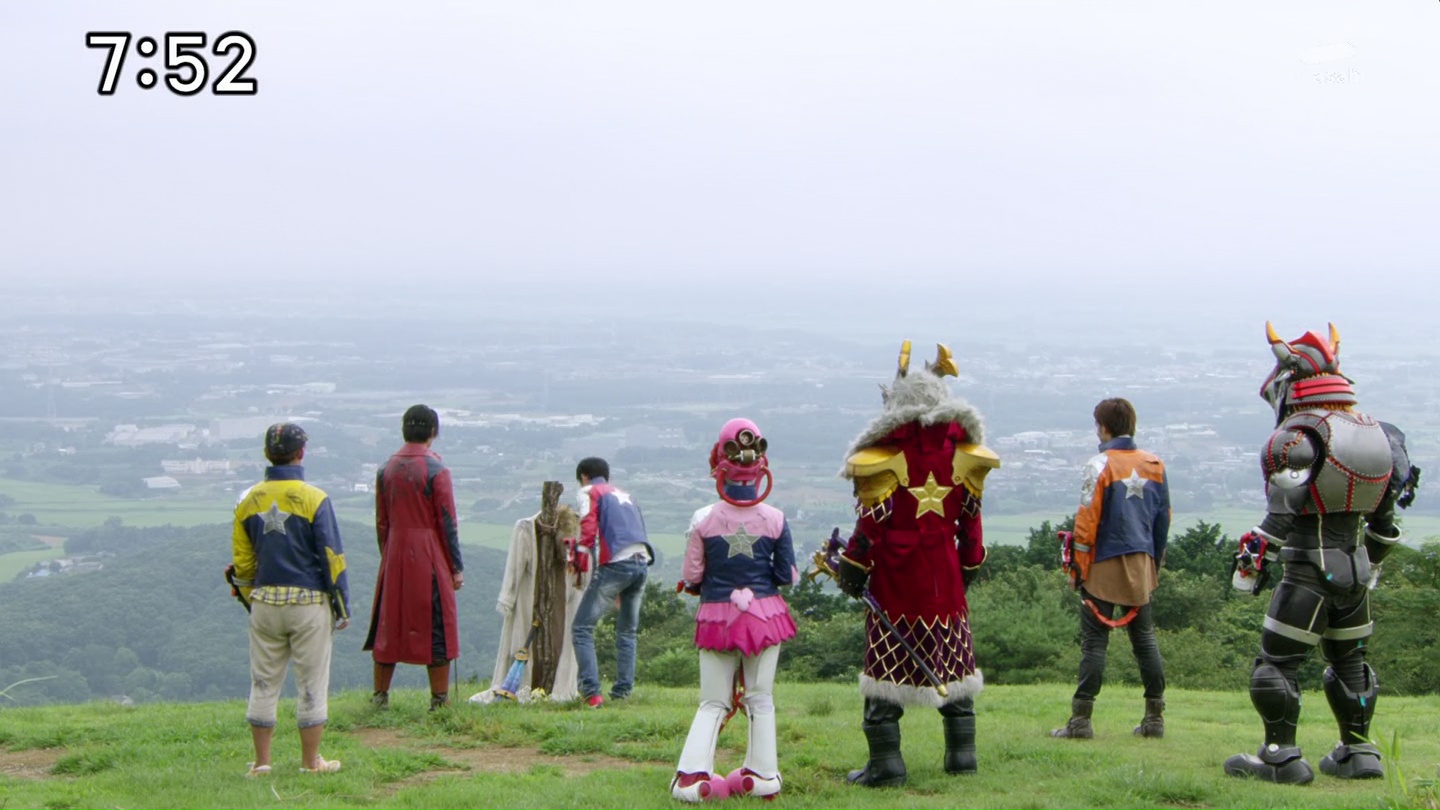 They bury Orion and Tsurugi says they will be sure to spread his legend across the galaxy.

Lucky says it’s time for them to go home to a future without Don Armage. But a wave washes over them and they start to disappear. What’s happening?

Raptor points out that with Orion dead, there’s no one to spread the legend of the saviors. They Kyurangers no longer exist. 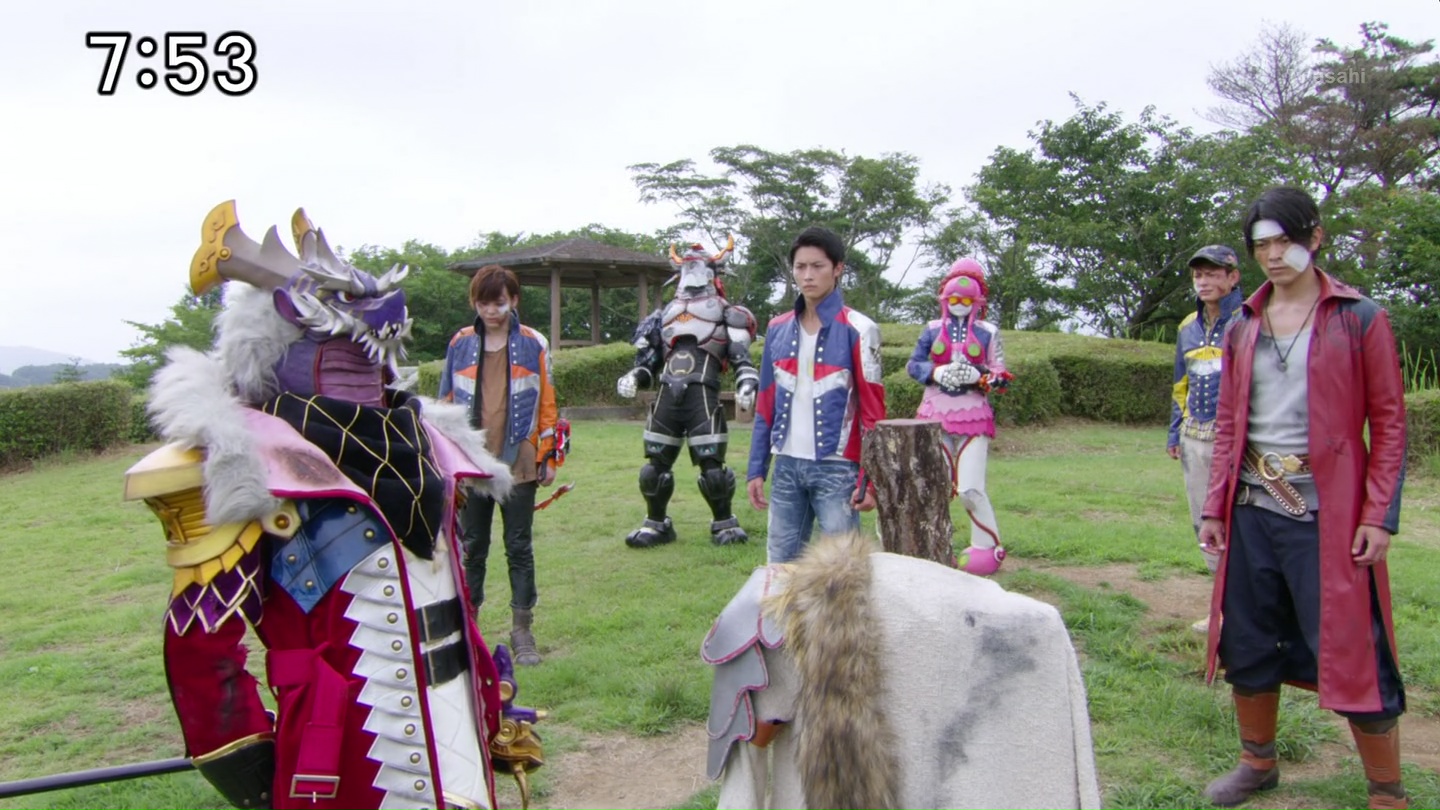 But Commander Ronpo offers to stay behind and take Orion’s place. He will spread the legend to the galaxy. “My duty as commander is over,” Commander Ronpo says. He wishes they live in peace in the present day. “That is my final order.”

Champ offers to stay behind as well. He says there’s something he would like to check out in the past. And with both him and Commander Ronpo, they’ll be able to find some way of returning to the present.

Stinger tells his partner to be sure and return.

The Kyurangers give each other a final salute before heading back to The Orion.

They arrive in the present day. It seems quiet and peaceful. 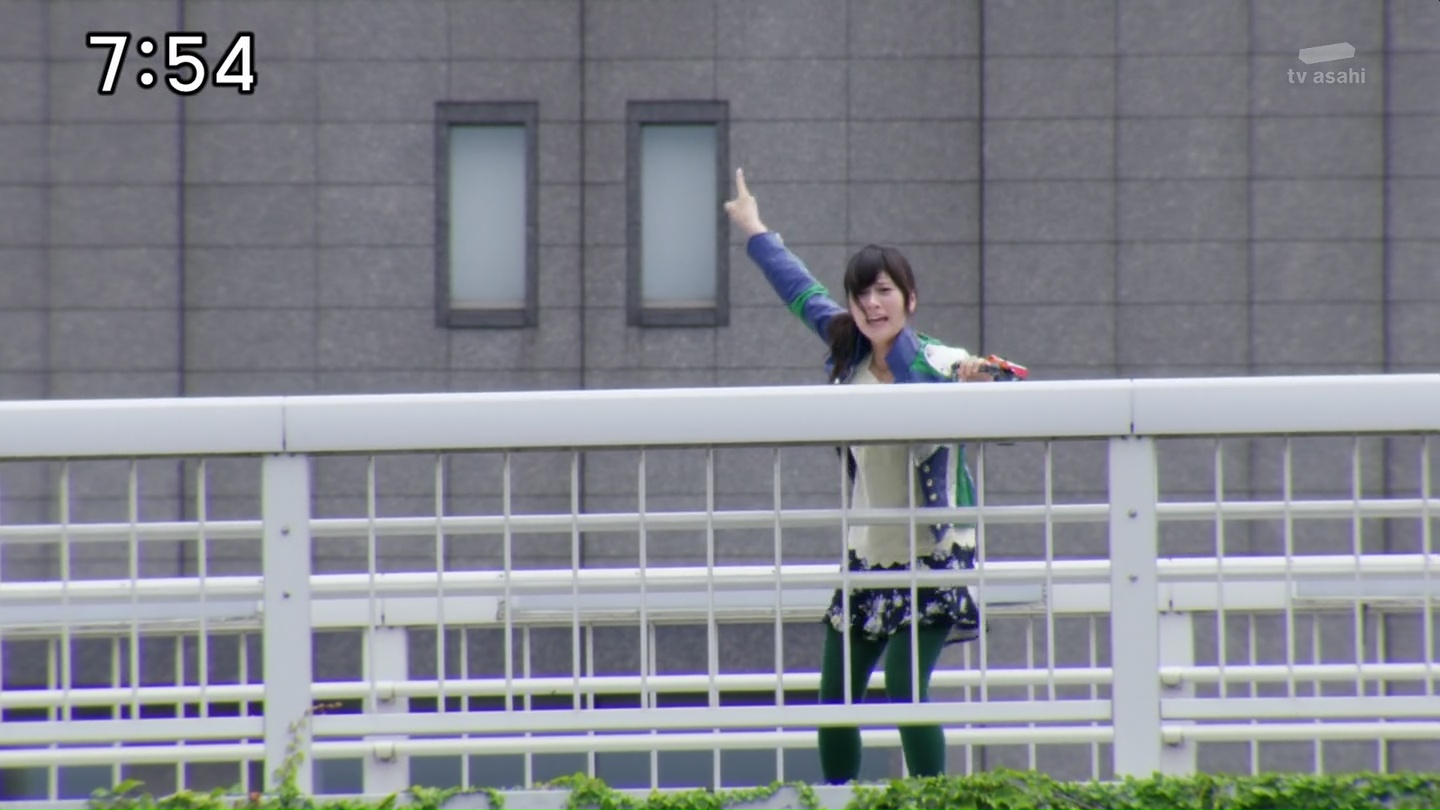 Just then, Hammie appears and waves at them. The returned excitedly celebrate this present without Don Armage. But Hammie’s waving isn’t one of excitement. She frantically points them to the big screen.

The Kyurangers are horrified to see darkNaga with Akyanba and Kukuruga. And not only that, but Don Armage appears on every screen in the city, laughing his head off. 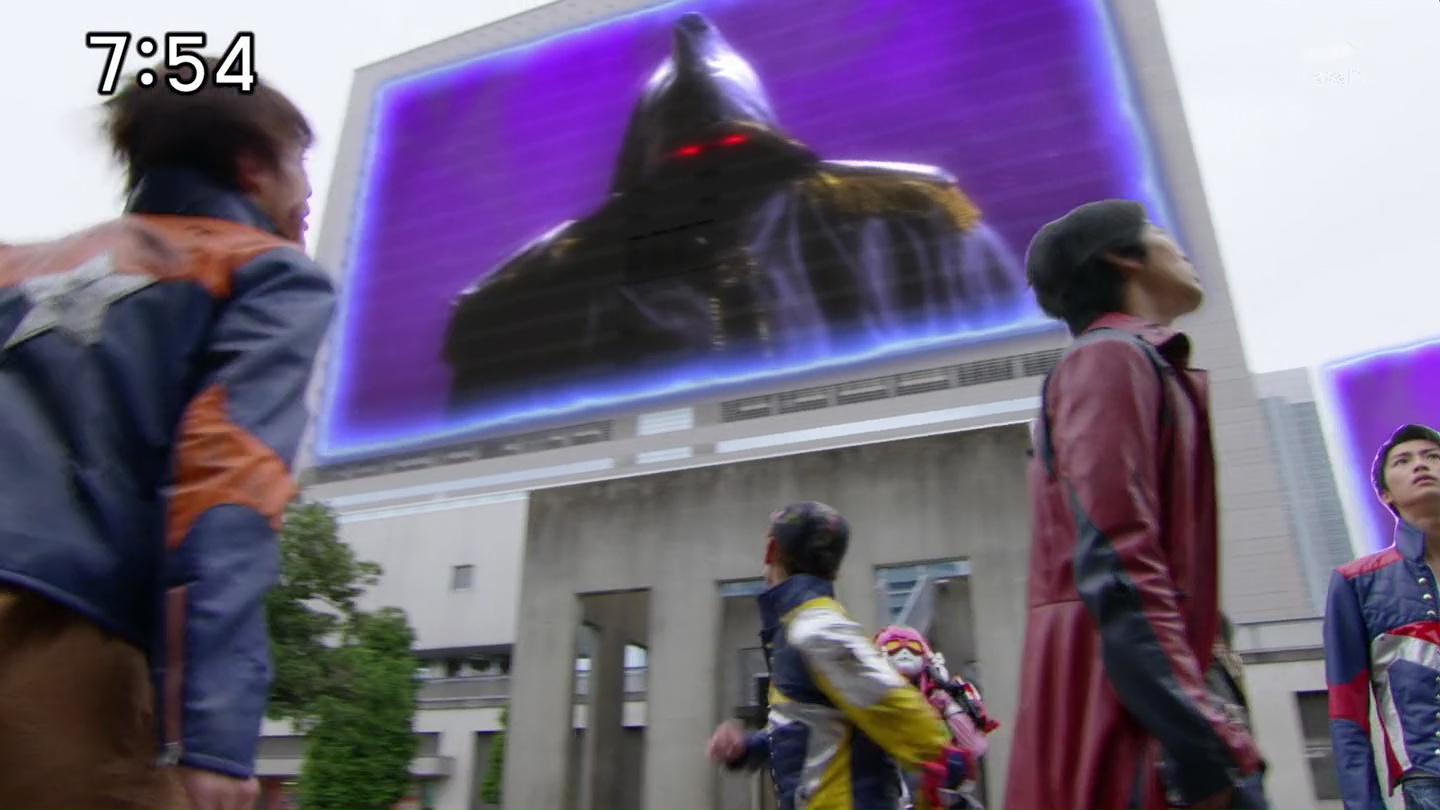 Okay! Alright. I see you Kyuranger.

First off, I must say that I might be a little underwhelmed by this episode. I mean, I have such high expectations for Kyuranger. And this certainly wasn’t a bad episode by any means. But I guess I expected it to be a little more epic than it was.

Of course Don Armage isn’t dead and the galaxy isn’t saved. This is only Episode 30 after all. But for Lucky to get the big Orion power (So that’s who that white guy was in the toy magazine lol) and the “revelation” that Orion the person is his ancestor (not father lol), I would expect or at least have liked this ep to be much more epic than it was.

Anyway, that’s not to say there wasn’t anything to like or love. Because there were plenty!

I absolutely loved/hated Commander Ronpo and Champ saying they would stay behind. Like that almost got the tears going for me. It’s a testament to how tight this team really is that when two of them decide to make that sacrifice, it’s a major blow. And definitely a huge punch to the gut. Obviously, this isn’t the last we’ll see of them two. But the idea that they will stay behind hundreds of years in the past is very emotional.

Though that does present a different butterfly effect wouldn’t it? Things could get tricky very fast. lol But so far, the timeline seems to have been planned out very carefully. So I’m not worried about any holes like that. I’m confident in the show.

Earlier in the episode, when they made a point about deadOrion changing the future (present for them), it was definitely foreshadowing that the effects could be huge. We’ll see next week of course. Doesn’t seem like one thing has changed.

Still, the idea of the legendary saviors from some kind of prophecy or whatnot did feel somewhat cliché at first. You just go with it because it’s the same for every Sentai team. Fate and destiny and all that. But the fact that they went back in time which is why that legend exists is very clever. It certainly adds a nice extra dimension.

As much as this was an episode about Lucky being “the guy” and Red and the one with the power up, I think it did an equally good job at highlighting the team as a whole. We didn’t see the #SaveNaga team until Hammie at the end. But the way they fought this episode and their genuine concern for each other is just awesome to watch. I love it.


The finale needs to be able to do 5x that scene. So exciting.

Overall, a very good episode that I think could’ve been AMAZING. But nothing to dislike or fully criticize about it.

Lucky’s Lucky of the Week