Calvin gets his baby Nitro (his truck) working again. Hayley reminds him that she is his girlfriend. 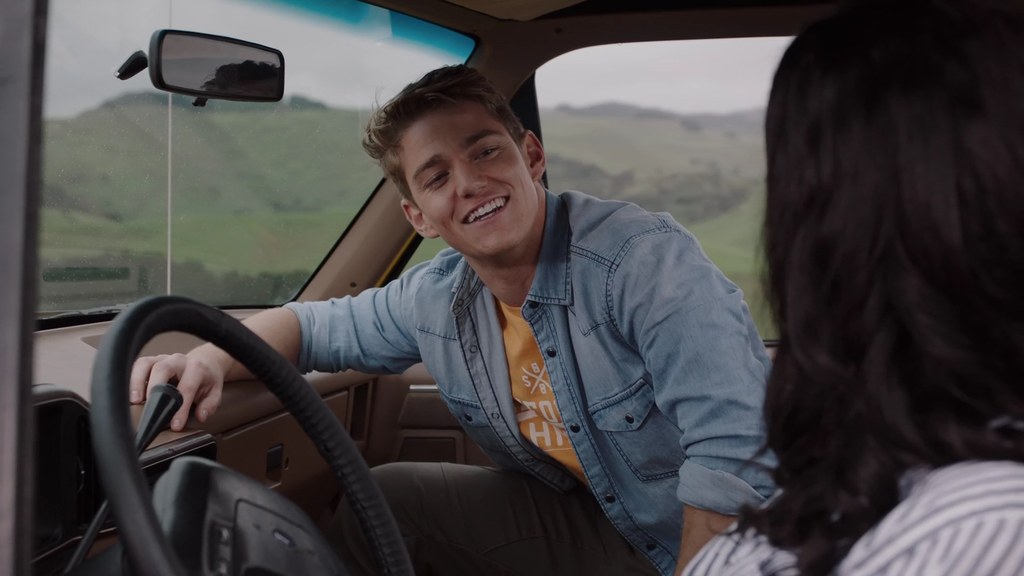 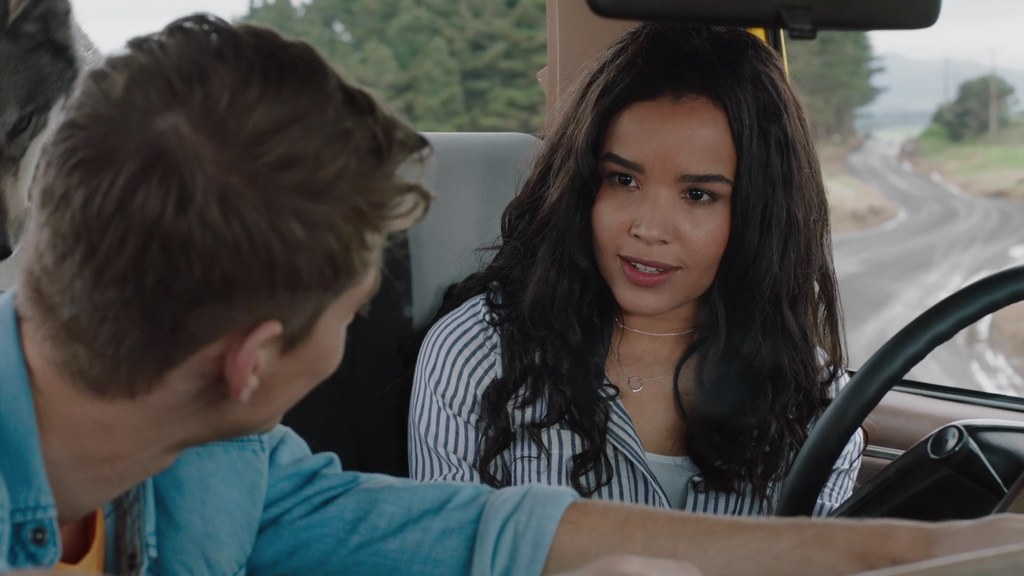 Before they drive on, the debris and garbage from the ship falls around them. They get out to look and meet Mick who turns himself back into human form.

Mick asks them if they know Brody who is also from Earth. But they don’t. Mick tries to describe the monsters he and Brody were running from and that’s exactly when Kudabots arrive.

Calvin and Hayley decide to try and scare the Kudabots off. And they do a pretty good job on the fly. They knock most of them out to give themselves just enough time to drive away.

Galvanax hears the news from Madam Odius of Earth teens being able to get their hands on the Ninja Stars he’s tried 10 years to get. Then Ripcon says Earth teens protected Mick. Galvanax can’t stand the cockroachy teens so he decides to issue a challenge to all the monsters who are taking part in Galaxy Warriors. Any monster who can kill the Power Rangers will become a Galaxy Warriors champion.

Back at school, Calvin and Hayley bring Mick to shop class. They tell him to just act normal. But the principal assumes Mick is the new shop teacher and welcomes him.

Victor and Monty just finish giving his car a fresh paint, but they end up blowing up the paint booth.

Across town, Brody and the others arrive at his old home, but his brother is nowhere to be found. Brody is beside himself, but Sarah tries to comfort him by saying Aiden would be able to take care of himself thanks to their father’s training. 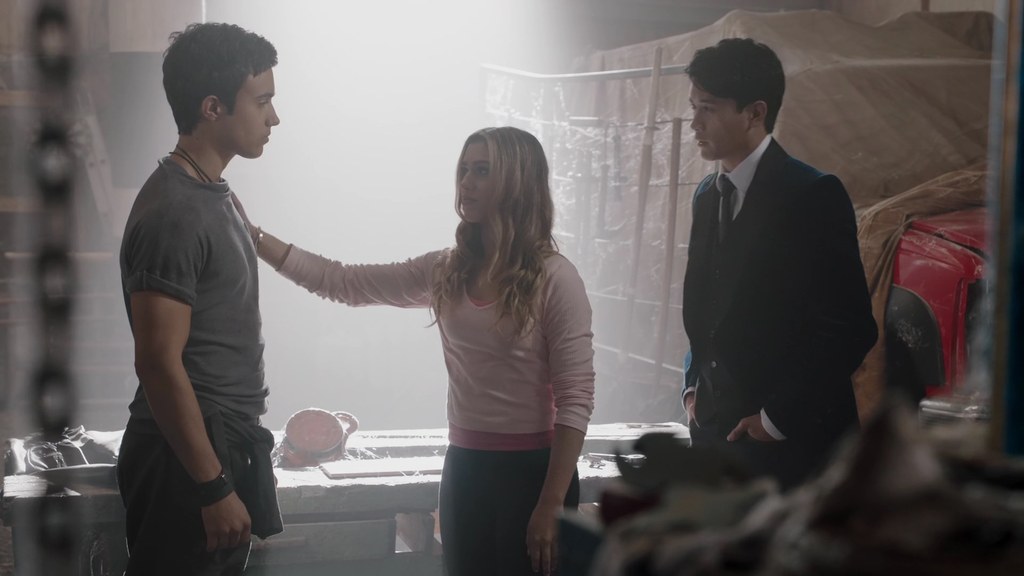 They head into the workshop. Brody digs up the box his father buried, but it’s empty except for a photo of Brody, his brother and father with a trophy. Brody believes this is a clue. Sarah recognizes the trophy and confirms that Brody’s father is Dane Romero.

But a Buzzcam is spying on them and Galvanax now knows their location. He has Cosmo Royale send down Ripperat to retrieve the Ninja Steel.

Back at school, it’s getting late. But Mick has just fixed his communicator is able to contact Brody. Sarah tells Mick, Calvin and Hayley to get the Dane Romero trophy and meet them outside.

Sure enough, the Ninja Steel is inside the trophy. Ripperat arrives and sends a blast right at Mick. Calvin and Hayley try fighting off Ripperat with a tennis racquet and baseball bat. Naturally, neither of them work. Ripperat turns his attention to Mick. He whacks Mick’s data comm and before he can slash at Mick, the Ninja Nexus Prism appears out of nowhere to knock Ripperat away.

Mick tells Calvin and Hayley to reach in and grab a Power Star. The Ninja Nexus Prism flies away again.

The others arrive and the five new Power Rangers morph together for the first time.

The Rangers take on Ripperat and use their morphers’ attack mode. The Battle Morpher can be used as a bow, a blade and a claw. Brody finishes Ripperat’s first life off with a Red Ninja Strike Seal Slash.

The Ninja Nexus Prism returns again and this time it has a vision of strange things. Mick says according to legend, the strange things are their zords. He opens the trophy and reveals the shurikens Dane Romero made. Mick tosses them into the Prism and they come back out, one for each of the Rangers. 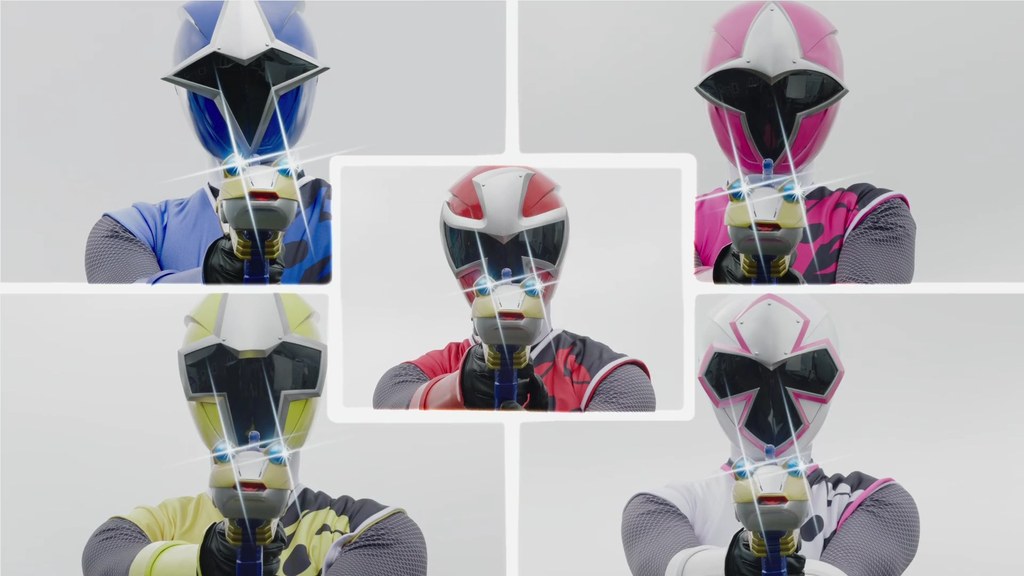 The Rangers lock in their zord shurikens onto their swords to summon their zords: Robo Red Zord, Dragon Zord, Zoom Zord, Nitro Zord and Kodiak Zord.

The Rangers take a little time to get the hang of their new zords, but eventually use their Ninja Blasters to take care of Ripperat for good.

Back at Summer Cove High School, the Rangers bring the Prism and all the debris from the ship back to the shop classroom. Calvin and Hayley suggest they use the paint booth as their hideout. And with Mick as their new shop teacher, it should be fine.

Brody thanks everyone for helping him today and apologizes for getting them involved in his mess. Mick says he doesn’t think this is an accident. It must be destiny for the five of them to become Rangers.

While the others get to working on secret entrances to the new base, Sarah points out to Brody that the 6th Power Star is missing. They realize it must have been pulled out between the time it left them and came back.

Back on the ship, Cosmo Royal reports to Galvanax that their ratings are yuge now that the Power Rangers are involved. But Galvanax doesn’t care about ratings, he wants the Power Stars.

Madam Odius laughs to herself that she has the Gold Power Star.

A good, solid episode. Would’ve definitely been better as a one-hour long premiere. It certainly felt like the 2nd part of a 2-part premiere.

At the start of the episode, having mechanical parts fall from the sky must be the most horrifying thing ever. That Hayley immediately thought plane parts is very sad and morbid, isn’t it?

I like that Calvin and Hayley are in a relationship already. That’s definitely a refreshing change from the season-long flirtations we’ve gotten, well, forever. I don’t remember starting a season with a couple already together. I wonder what kinds of stories the show will come up with for them as a couple.

So I assumed the Gold Ranger would be Aiden Romero. But I was legit surprised Kyuuemon, I mean Madam Odius has it instead. Though I guess we can’t rule out Dane Romeo/Madam Odius to be in a “trapped inside a villain’s body” type of deal. At the same time, if Madam Odius is as cunning and interesting as her Japanese counterpart, then I wouldn’t mind her keeping the Ninja Star herself for a while.

They did a lot more on the ship and with Galaxy Warriors. Sentai has used less and less monster of the week-type characters, many times in recent memory, recycling monsters later in the season. So I wonder if all those monsters in the audience of the show are actual competitors. Interesting to expand that reality show world in future episodes.

So I mentioned last week how there was quite a bit of exposition. Maybe too much. This week, I feel like there wasn’t enough. Specifically, I think the zord intro scene needed more explanation beyond Mick randomly throwing the shurikens into the Prism and all of a sudden, zords (that appear to have been prophesized before) take on things from each Rangers’ personal life. I though the idea of doing that was clever and cute. But the lack of explanation and Mick just randomly throwing out facts and rules here and there, but not here specifically was kind of awkward.

I was hoping for more than just “Wow! This zord’s cool like my most prized possession!”

Having the school as their command center is very interesting. Closing the paint booth and making secret entrances seems very risky and ambitious. But we’ll see. Lots of “close calls” probably during the season.

Nice though to have Kelson Henderson’s Mick regularly on the show, it appears. He’ll play parts in both the Rangers’ school life and their superhero life. Probably to explain more about Ninja Stars and stuff.

0 thoughts on “Recap: Power Rangers Ninja Steel, Episode 2 – "The Earth is infested with [teenagers], like cockroaches."”