TheWorld has just wrecked the Zyuohgers. While they’re on the ground, Naria cares to explain that Ginis was inspired to fuse the three zyuman powers and a human into TheWorld after seeing Yamato go Gorilla.

The Zyuohgers call on all their Cube friends and it’s a battle royale.

TheWorld decides to combine his Cubes into Tousai Zyuoh. The Zyuohgers go Wild Zyuoh King. But TheWorld easily counters everything the Zyuohgers throw at him.

TheWorld delivers a Tousai Triple the Beasts and forces the Zyuohgers’ Cubes to separate. TheWorld is ready to finish this once and for all, but Ginis calls him back to keep the game going a little longer.

The Zyuohgers are all rattled by what they’ve just experienced. They head back to the treehouse. No one wants to admit they are scared. That is, until Uncle Mario pops out of his workshop dressed as a rhino.

Uncle Mario tries to cheer them up and it works, for now.

Up on the Sagitariark, Azarudo is eager to use TheWorld for his game. But Cubaru and Trumpass still have more use for TheWorld in theirs.

Trumpass sends cards across the city which traps people inside of a card box. He tries to convince people to take the smaller cards on the card box, but it only zaps them.

The Zyuohgers arrive. Leo wants to just punch the box open, but Trumpass says it will explode and kill the hostage. Leo decides to take a card, but it explodes and he demorphs. Same for Yamato and Sela.

Tusk figures out that if they defeat Trumpass, the people will automatically be freed. Suddenly, a heart pops out of Trumpass. He quickly pops it back into his body, but Tusk and Amu have already figured out that’s the key to defeating them.

Trumpass realizes he’s at a disadvantage, so he calls for TheWorld. He points to the sky and the Zyuohgers all look up, afraid. That allows Trumpass to retreat and the Zyuohgers duped into thinking TheWorld was on his way.

Yamato gets the others to admit that they are truly afraid of TheWorld and that they have to accept they will be fighting TheWorld again. 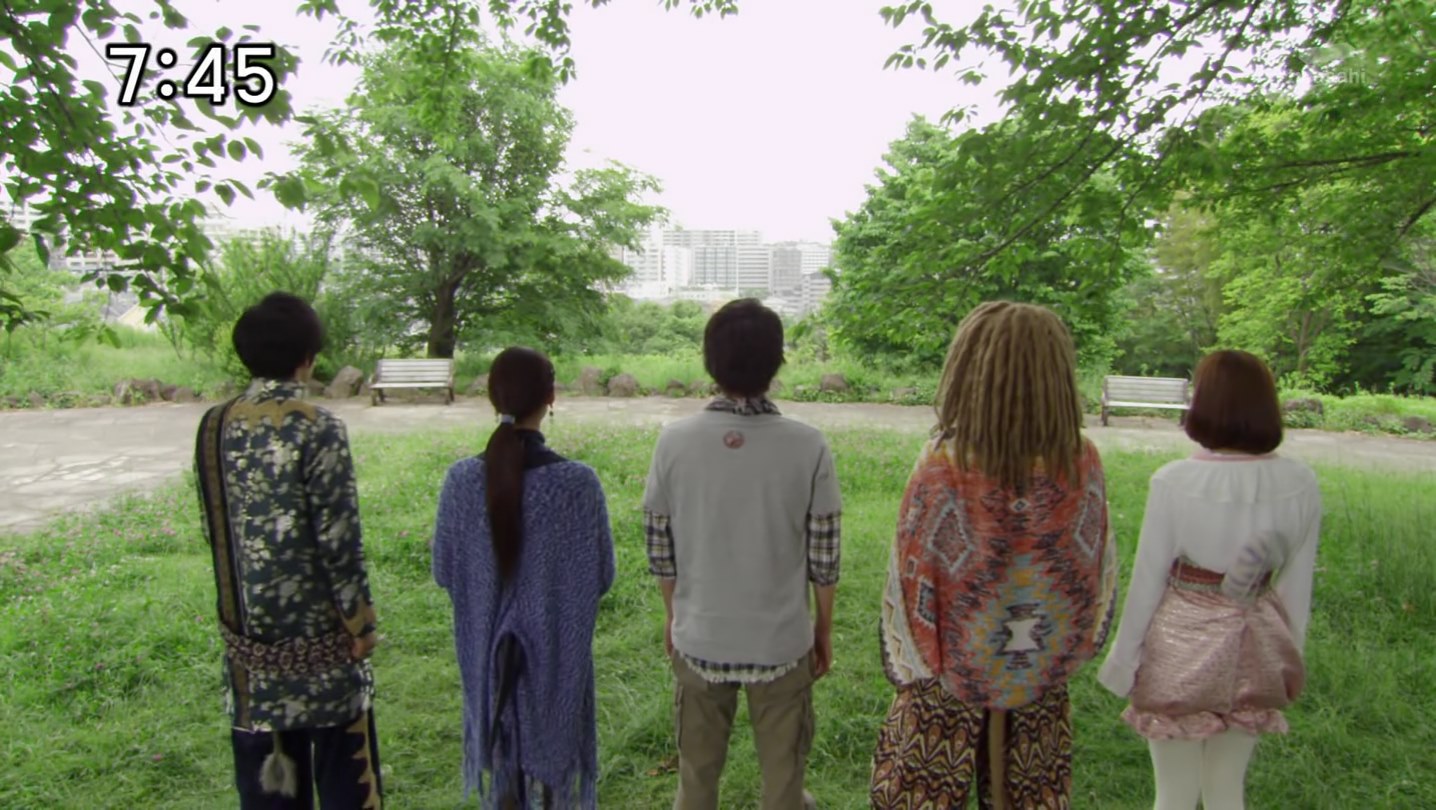 The Zyuohgers reaffirm their promise to protect the people of this world.

They hurry back downtown to stop Trumpass as he traps more people in card boxes. They morph.

Trumpass calls for TheWorld, but the Zyuohgers won’t fall for it this time. They take on Trumpass with a renewed energy. Because of this, Ginis really sends TheWorld down to Earth.

This time, the Zyuohgers charge forward. TheWorld uses his rod to whip the four Zyumans away. But that was their plan to allow Yamato to use his whip to carry TheWorld away. That leaves Trumpass to the four to deal with.

The Zyuohgers are able to pop Trumpass’ heart out and destroy it. That frees everyone, but Naria comes down with a Continue.

The Zyuman4 know they are not at full power without Yamato, but they are resolved to fight all they can and as hard as Yamato is right now. With Cube Kuma’s help, they finish off Trumpass for good.

TheWorld goes Crocodile and his battle with Yamato continues. It’s an even match. But TheWorld unleashes all three of his beasts. That forces Yamato to demorph when TheWorld hurls him in the air.

TheWorld is about to finish off Yamato, but a surge suddenly zips through his body. He too demorphs into a shirtless man!

I thought it was a solid episode, though I think they dropped the ball with a few things that could’ve really made it even better.

I enjoyed seeing the Zyuohgers unsure and maybe a little in doubt. They may have been afraid of TheWorld and almost died twice already. But it’s good to see them with some doubts so that we can see them overcome and become more powerful. It’s a plot device, but it’s good here.

TheWorld kicked their butts, no question. But I feel like they should’ve been even more beaten down to emphasize how hopeless they were feeling. It would be more inspiring and uplifting when they regained the resolve. (That’s a very typical arc on toku.)

With that final scene, I guess I get Yamato being shocked by this skinny shirtless man in front of him. But I think a better cliffhanger would be if they and we the audience didn’t know TheWorld was a human. Maybe two episodes ago, we only saw Ginis and Co. in front of some exploding thing and seeing the three Zyumans tied up, but not the human. Then Naria not explaining everything to the Zyuohgers this episode. That way everyone would be in shock by this final scene.

So I think that part of TheWorld’s introduction could’ve been developed better to have maximum effect.

Speaking of, I still wish TheWorld will stay under Ginis’ control a little longer than next episode. Hopefully that preview is just a tease and he’ll actually be mind controlled for a while longer.

That opening mecha battle was awesome. Mostly CGI, but it was fun and exciting. I don’t remember the last time there was a bunch of different, separate zords in a basic free-for-all kind of battle. I enjoyed it.

And the Zyuohgers using Kuma and sending that blast down the street though. They just killed all those people in their cars on the road! lol Zyuohger really has had high collateral damage all season so far.

Anyway, a solid episode, but could’ve been much more exciting with some things done differently.

Recap: Avataro Sentai Donbrothers, Episode 16 – Switching to the Dark Side