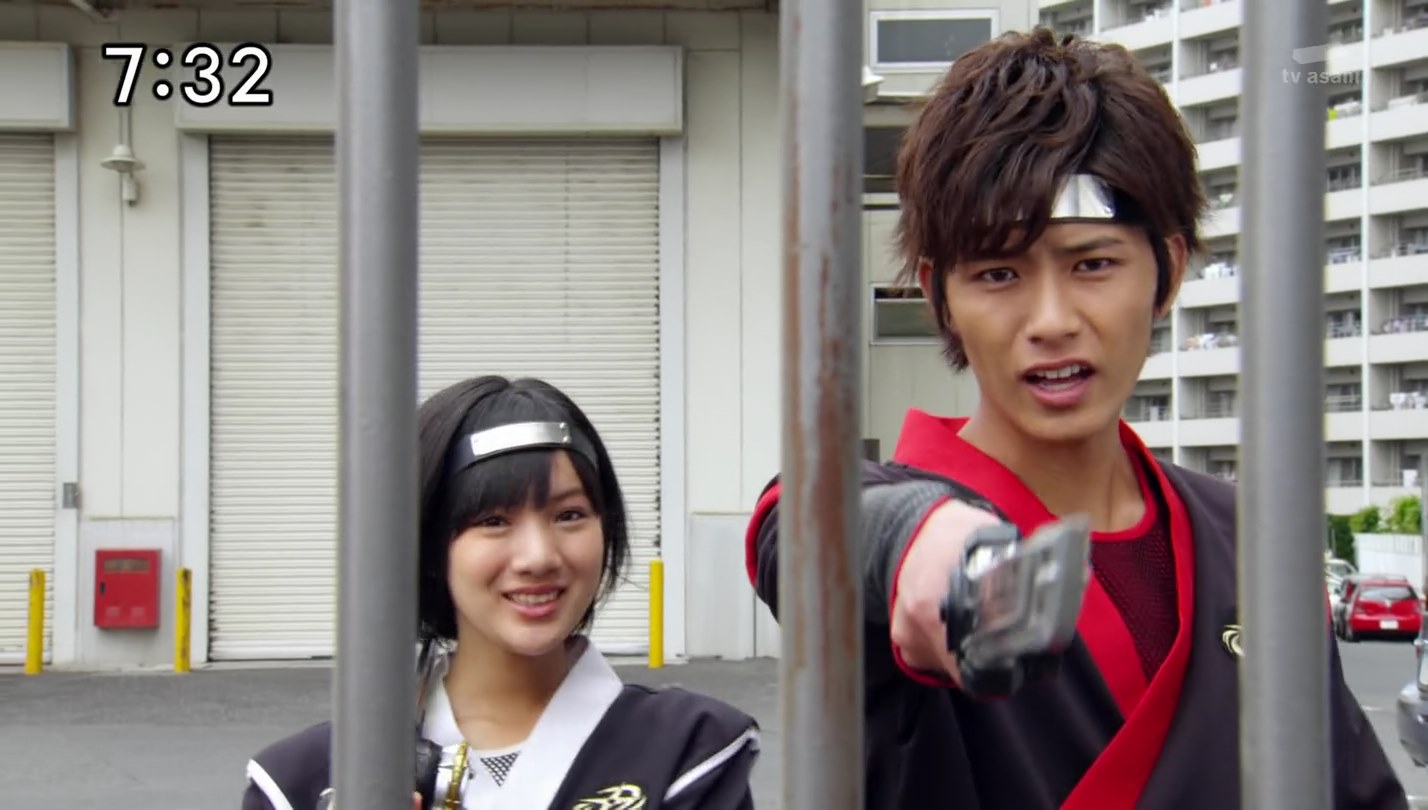 The Ninningers have just taken care of Jukkarages, but no Youkai. They decide to head home in the meantime. But Fuuka tells Takaharu they should go shopping for a Father’s Day gift.

They split up with their cousins who head home instead. But Masakage has initiated a plan to have the Jukkarage follow the Ninningers to their secret base.

The Jukkarages tail the Ninningers, but they all have no problem sensing them and taking care of them.

Kyuuemon tells Masakage that it doesn’t look to be as easy as they thought. But Masakage says this was only the beginning. It’ll actually be someone else who leads them to the Ninninger base.

The cousins head home and tell Father about being followed. But it’s okay since being aware of their surroundings is basic ninja stuff. Father compliments them on becoming fine ninjas and being able to do what he couldn’t.

Father remembers the regrets he had when training. Fuuka sees him thinking, but he says it’s nothing. Anyway, he has to go to the supermarket as they’re having a big sale today. Kinji pops in as Father leaves.

On the way, Father drops his fountain pen which Masakage picks up and attaches a Sealing Shuriken to create Youkai Kasabake.

Kasabake makes it rain. And the Gamagamajus and cheeseburger detect it.

Father finishes his shopping and sees there is a basket of free umbrellas to borrow. He takes one and heads home, but the umbrella is actually Kasabake.

He runs into the kids who tell him about a Youkai being detected. He tells them to be careful as the hurry off. But Kinji sees the footprints abruptly stop here at the supermarket. They see the umbrella basket and realize…

The rain has stopped and Father folds the Kasabake umbrella up. He realizes he’s dropped his pen so he decides to head back before arriving home. Takaharu comes running up to him, grabs the umbrella and tosses it aside.

Kasabake is back in his original form. Fuuka tells her father to hurry home.

Kinji takes a selfie with Kasabake before he retreats.

Back at the dojomanse, Father apologizes for having no idea the umbrella was a Youkai. But the cousins say it’s okay. They just have to be on guard for now.

Later, Takaharu and Fuuka sit with their father who is really upset with himself. They say it’s okay that he didn’t know since he’s not a ninja.

Father tells them how he was called a ninja genius when he was younger. He also wanted to inherit the Last Ninja title, so he trained very hard. But when he was around Fuuka’s age, he lost his ability to perform Ninjutsu.

He shows them by trying a Tornado Technique. But all he can manage is a slight breeze. He also looked up to Grandpa as a great Last Ninja, but that doesn’t really help. So he gave up.

Fuuka asks if he regrets giving it up, but he doesn’t know. If he did inherit the Last Ninja title, then the kids wouldn’t have to go through all this trouble. Takaharu says he would’ve become a great ninja regardless. Plus, it would be hot to have three generations of hot ninjas.

Kinji is listening to the conversation from around the corner.

Anyway, Takaharu has an idea. Father can still become an awesome ninja.

Father heads back to the supermarket. And as he goes home, Kasabake and Jukkarages again follow.

This time, Father faces them and uses some Ninjutsu, courtesy of the kids. Kasabake is shocked Father can use Jinjutsu too.

Father whips his clothes off to reveal his own uniform. Kasabake follows him and thinks he’s got him cornered. But Kasabake gets stuck and Kinji uses Wind Technique to whisk Father home.

Kasabake thinks he’s finally found their secret base. But actually, this is just an illusion and they’re at the quarry.

Father excitedly gets into being Super Ninja. The cousins and Kinji join him and tell Kasabake there’s no use tailing them.

Takaharu and Fuuka tell Father they’ll take it from here. They all henge and roll call.

But Kasabake squirts ink bombs at them and attaches word bombs.

Father sees they are in trouble and hurries down to help them. He stands in front of Kasabake and tries to unleash a Tornado Technique. But again, it doesn’t work.

Takaharu takes the hit when Kasabake fires a shot at Father. Takaharu and Fuuka tell their father to stay back and run to safety as the cousins and Kinji absorb more attacks.

“Is my role just to be protected,” Father asks himself. He sees his children and niece and nephews fall to the ground. Takaharu again tells him to run.

But Father stops. “I am also a descendant of the Last Ninja!” 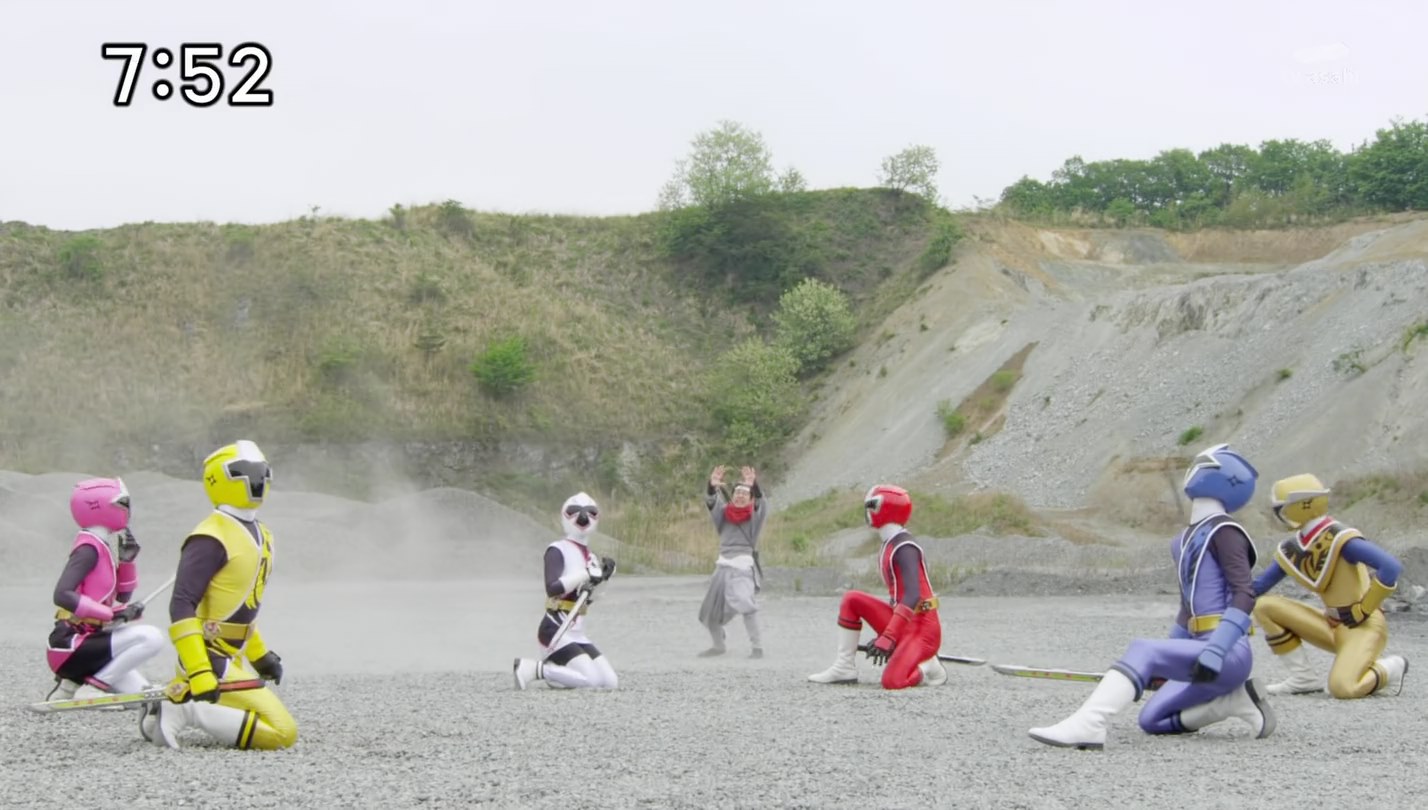 He turns, plants his feet and unleashes a huge Tornado Technique as Kasabake is floating in the air.

The cousins are surprised, but maybe not as much as Father is himself. He can now do Ninjutsu!

Kasabake returns as Father suggests they combine their powers. He unleashes another tornado and Takaharu hitches a ride to deliver a Ninja Flash finisher to finish off the Youkai’s first life.

Fuuka suggests they use UFOmaru and later combine into King ShurikenJin to unleash a King finisher.

Back at the dojomanse, Father tries to use the Tornado Technique again, but instead, it’s back to slight breezes. He wonders why. Kinji suggests it was because of his deep feelings for his family that helped.

Takaharu and Fuuka thank their father and give him his Father’s Day present, a brand new fountain pen. They joke that he better not drop it or it’ll turn into a Youkai again.

I loved this episode! Father finally gets some good material and some actually good scenes between him and his kids. The last time we had a Father-son/daughter moment on the show, Fuuka was running away from him like he was some creepy old man. Not a good look at all.

Thankfully, this was a proper Father’s Day episode that helped develop Father’s character more as well as give more depth to Takaharu and Fuuka’s relationship with their dad.

I was hoping and hoping and hoping that Father really had Ninjutsu and it wasn’t Grandpa or something doing it for him. I was afraid they were going to pull the rug out from under him again even after he unleashed that tornado at the end. But I’m glad it really was him and it was used to highlight just how strong a love for your family really is. It’s a great lesson for the kiddies of course. But it can also make for great story, especially on this season.

Again, I hope they really delve into the family dynamics a lot more with all the characters. It’s a great theme and very fresh for Sentai. (Especially for me since I never saw Magiranger.)

Kasabake had a great design! A fountain pen, octopus, umbrella. Very creative. The monster designs for ToQger and now Ninninger have been on point.

So overall, one of my favorite episodes of Ninninger so far.