Roidmude 050 is being sketchy in a residential neighborhood.

Over at the SID, Rinna shows Shinnosuke, Kiriko and Gou Tridoron’s Ride Boosters which attach to either side and help Tridoron fly. Rinna says it’s to be used when all three Kamen Riders fight together.

While the three are excited, Gou says Chaser is no Kamen Rider to him. Kiriko asks Gou why he hates his future brother-in-law Chase so much and he says it’s because he’s a Roidmude. Duh.

Gou shoves his sister which provokes her to slap him.

Otta breaks the awkward silence to tell them they have been summoned by the First Division. Gou walks back to his bike.

As the others hop into the van to head over to headquarters, Gou is stopped by a young lady who needs the SID’s help as her brother has been taken by Roidmudes.

At the First Division meeting, they are being briefed on the residents of a residential neighborhood being found writhing all over the ground.

Chief Nira wants to hear what the SID wants to say. Chief Jun gets up to speak, but Chief Nira, taunting Shinnosuke, wants the son of the great Tomari Eisuke to speak instead.

Shinnosuke does his best to control his temper and says they must know whether there were Gravity Shift particles at the scene to know definitively if Roidmudes were involved.

A man walks into the conference room. Kiriko and Shinnosuke are shocked.

Chief Nira introduces this man as an adviser to the “mechanical lifeform incidents” from the Special Sciences Division Lab, Noumi-san.

Gou is with the woman from earlier, Souma Yoriko. She shows him a picture of her brother, Haruto Ryo. He works for a real estate company and got a job as soon as he graduated because he believed the greatest happiness was seeing families smile. 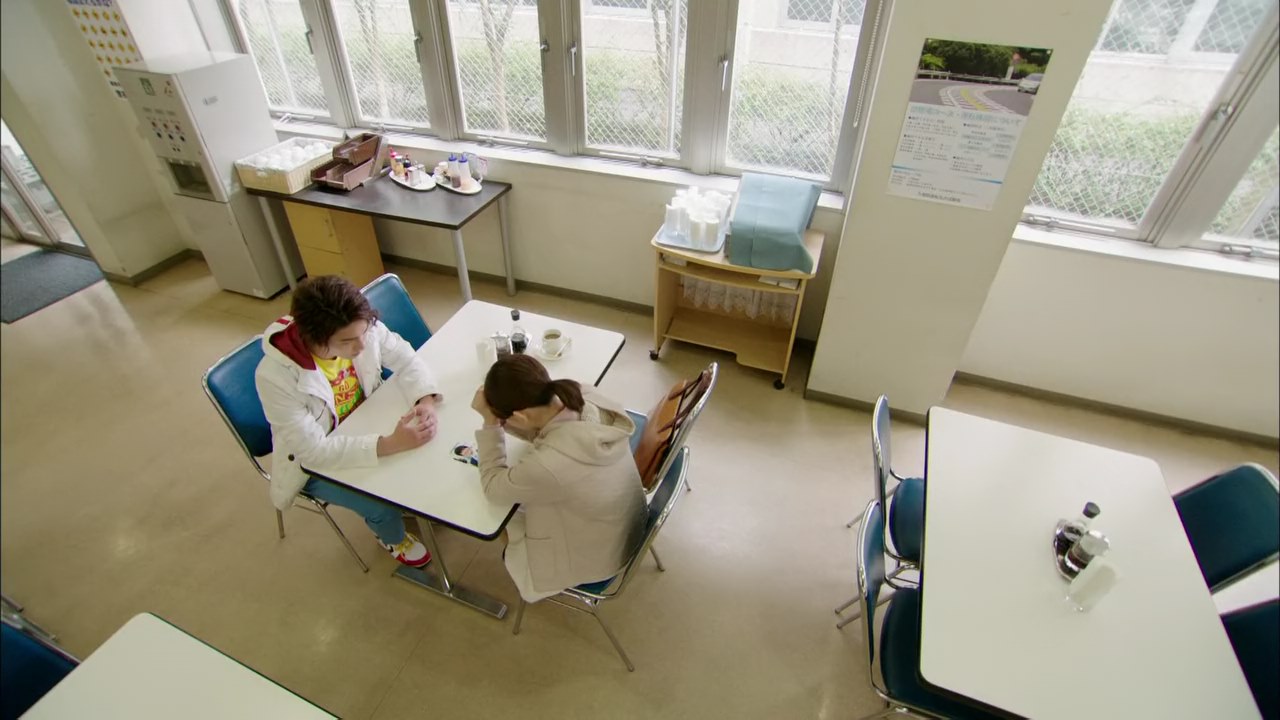 Yoriko breaks down, angry with the horrible monsters who’ve taken her brother. Gou swears to save him.

Brain smugly walks out of the briefing. Shinnosuke follows him out and asks what he’s up to. “And why would I tell you? We’re enemies, after all.”

Brain goes Roidmude form and Shinnosuke henshins. They take their fight to the roof.

Brain says that he’s here because 001 has begun to make his move. He warns that 001 is a ruthless man and anyone who gets too close will get burned… “just like your father.”

Shinnosuke demands Brain explain what he means, but Brain acts coy. An enraged Shinnosuke goes Formula. Belt-san tries to get him to calm down.

Brain laughs hysterically before screaming for help. Chief Nira and his men arrive on the roof and restrain Shinnosuke as Brain pretends to cower in fear.

Chief Nira vows to report Shinnosuke to the big bossings.

Brain heads over to the National Bureau of Defense to report to 001…err, Minister Makage.

Superintendent Matsui from the National Police comes in to remind Minister Makage that he reports to him. But Makage, literally, twists Matsui’s mind and controls it to think whatever he wants him too.

Over at the SID, Chief Nira obnoxiously gleefully gloats over Shinnosuke’s being taken off all cases and barred from henshin-ing while the higher ups decide on his punishment.

Chief Nira rubs his face all over Shinnosuke’s back and warns that Shinnosuke will be forced to resign if he disobeys the order.

Chief Nira skips away as Rinna hurries in to tell them that even Tridoron has been taken away. Otta wants to persuade Nira to reconsider, but Shinnosuke says this is his problem, so he’ll take care of it.

“You’re not going to quit being a cop, are you?” Chief Jun asks.

Shinnosuke says the need to protect people goes beyond orders from up top. But Chief Jun says he can’t quit being a cop. That would mean his father’s death would have been in vain.

“It’s not only the Kamen Riders who protect the people. It’s the police’s mission as well. Your father loved the police force. He kept their dignity alive when he died in the line of duty.”

Across town, Gou and Yoriko head to Ryo’s real estate office where they look at some documents that show the three incidents of collapsed residents all happened in new residential areas Ryo was in charge of. 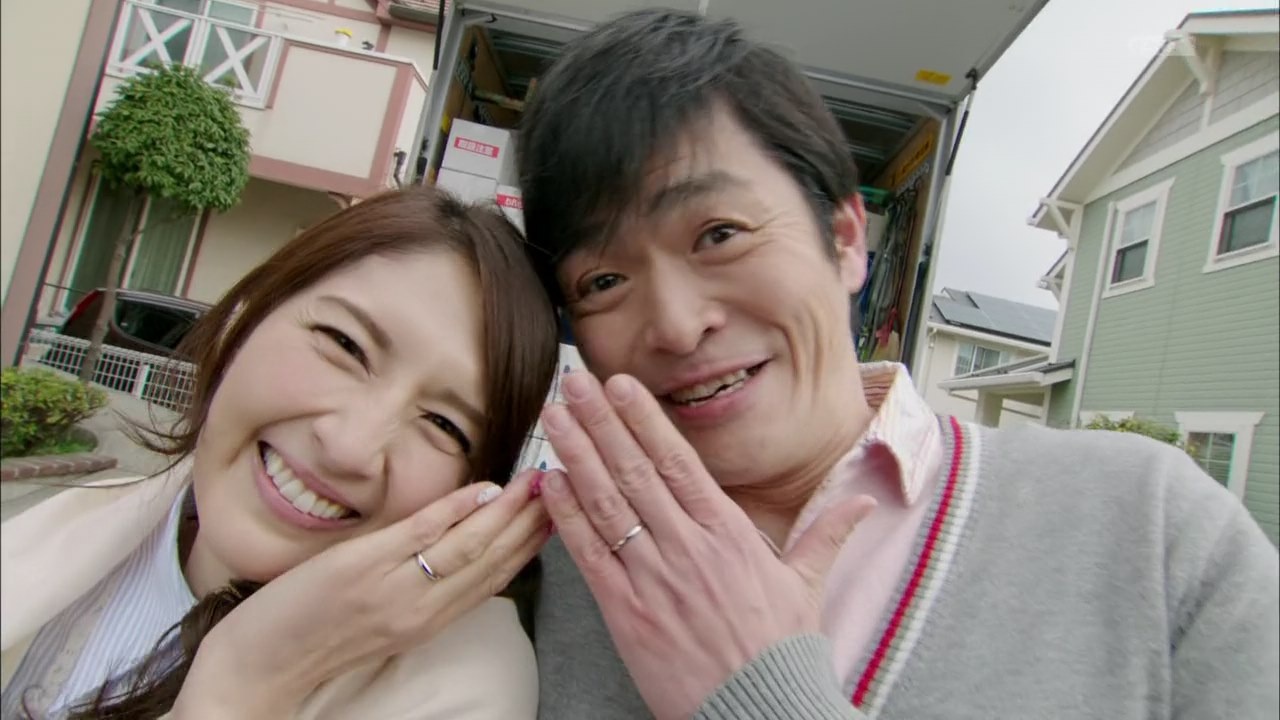 Over at the SID, they are looking at similar information and they get ready with their own plan as well.

Rinna and her Genpachi act as newlyweds who are moving into a new home in the next neighborhood under Souma Ryo’s jurisdiction.

Back at the SID, Chief Nira comes to check on Shinnosuke to make sure he’s obeying the order. Belt-san is tied up. Chief Jun points to Shinnosuke lying on the couch, lifelessly eating his candy.

Chief Nira laughs and traipses off.

Gou knows exactly where she is though.

Kiriko meets with Chase and asks a favor of him. But first, he also has a favor. He would like her to restore his memories inside the Proto Zero Shift Car.

Shinnosuke asks Gou why he hates the Roidmude so much. Gou replies that Roidmudes are evil. They take happiness away from families.

Suddenly, the residents of the neighborhood all start fighting with each other. Even Genpachi has become enraged with Rinna for making fun of him about mispronouncing the Boidrumes. Shinnosuke tries to calm him down, but he sees something stamped onto Otta’s hand.

Rinna knocks Otta out with some foam as husbands and wives fight in the streets.

Gou tries helping a little boy who is trying to get his parents to stop fighting, but the father just kicks them away. Remembering when his Neechan tried comforting him as a kid, Gou tells the little boy it’ll be alright.

Gou has a flash of some mad scientist-haired shadow laughing. It fires him up even more, but the fighting husband knocks him around.

“What’s happening Gou?! You’re not acting like yourself!” Shinnosuke yells over.
“Like myself? You don’t even know what I’m burdened with!!!”

050 walks out into the open and encourages everyone to continue fighting so they can evolve. 050 explains that is an experiment to see if people who aren’t completely rotten can still become suitable vessels for enhanced Roidmude, like Taga was.

050 used these happy people and amplified their feelings. He initiates the last part of his experiment. And like the previous occurrences, the people collapse and lose consciousness. That means none are suitable skinsuits.

“You damn Roidmude.” Gou is incensed. “Why are you all so goddam despicable?!”

Low-level Roidmude arrive to help 050 and Gou gets knocked around. Shinnosuke runs over to help as 050 stabs Gou in the chest.

The two Ride Boosters arrive to help and drop off Belt-san and the Shift Brace. Belt-san asks if Shinnosuke will henshin and he says he will, orders be damned.

But Shinnosuke remembers Chief Jun saying Shinnosuke can’t give up being a police officer. Shinnosuke hesitates. The police arrive and he struggles with the decision even more.

Suddenly, Chase arrives. He says Kiriko filled him in on the deets and he’ll take care of it now. 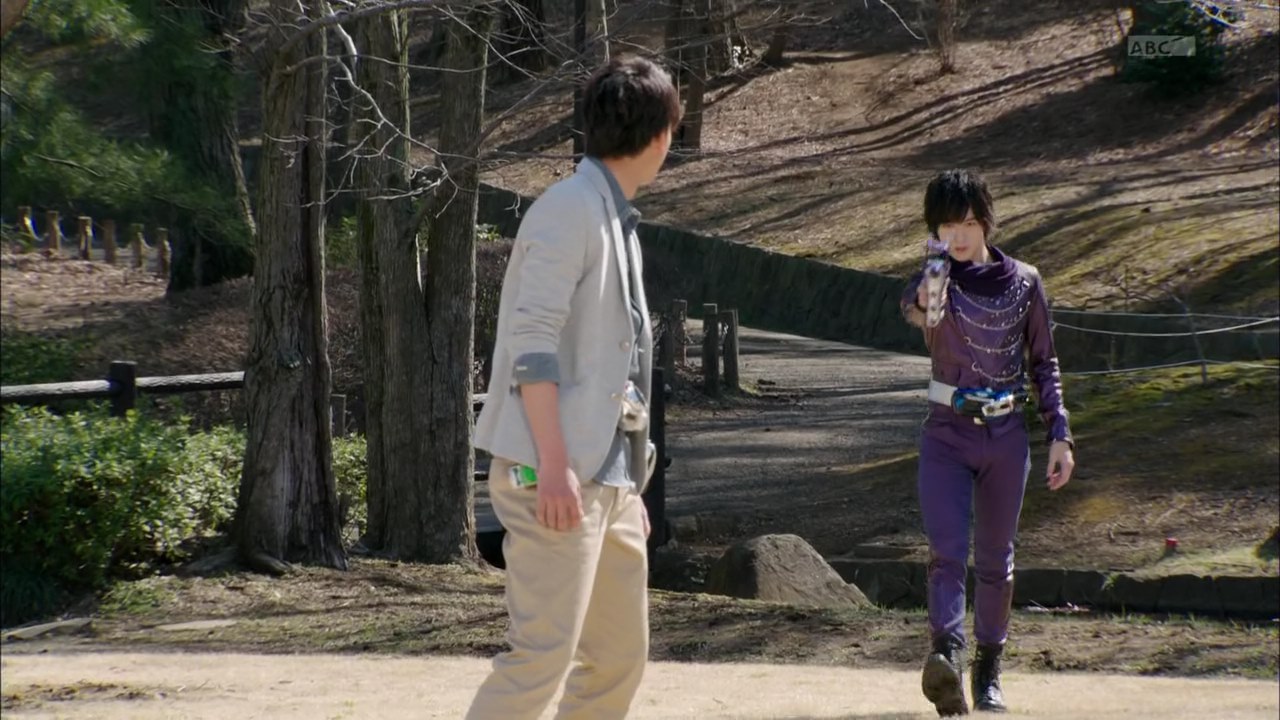 Chase henshins and fights the three Roidmudes. But Gou is not happy.

Chase uses Signal Axe and the Ride Booster to deliver a Full Throttle Finisher on the two low-level Roidmudes.

Gou knocks 050 aside and hops on his Ride Booster to attack Chase. Shinnosuke yells for Gou to stop.

050 happily watches his plan going the way he wanted. 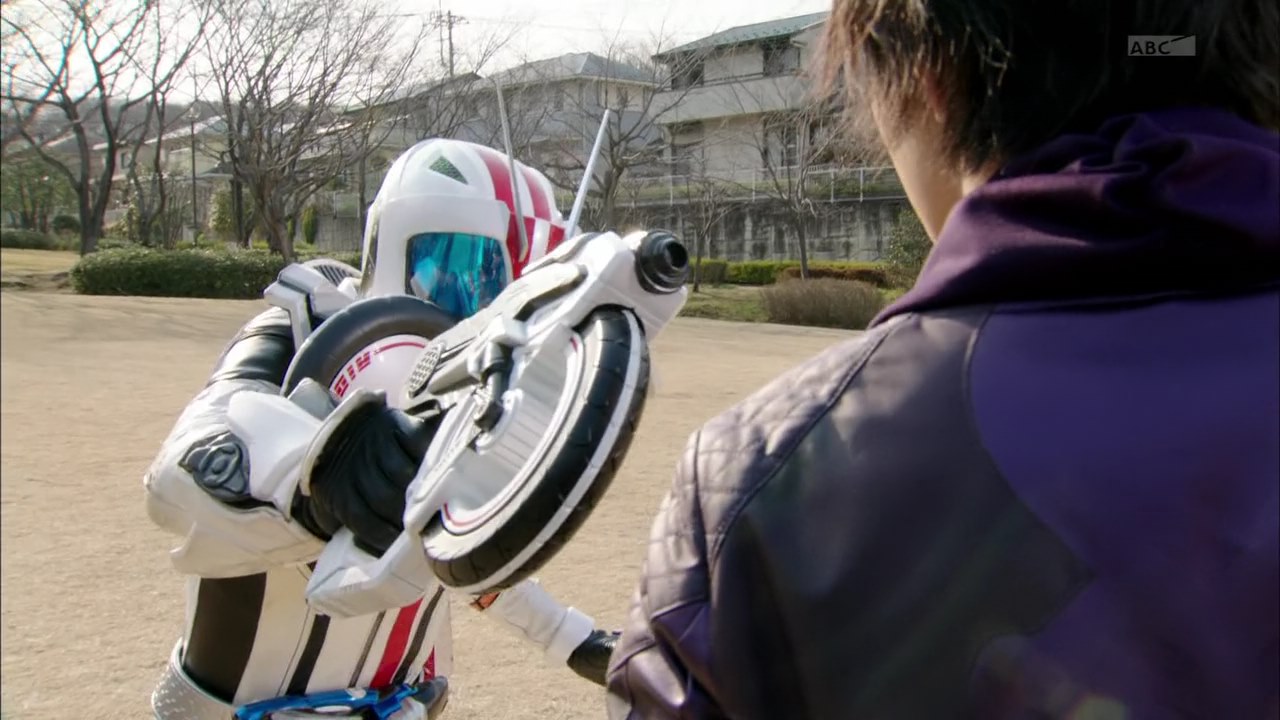 Gou relentlessly attacks Chase until he dehenshins. Gou stops himself, but continues with his attack only to have Shinnosuke get in between them. Gou is able to pull back and he collapses on the ground.

Shinnosuke says Kiriko would’ve done the same thing. “I didn’t do it just to protect Chase. It was to protect you too, Gou.”

Paramedics are wheeling out the unconscious residents, including Genpachi.

Shinnosuke tells Gou that he understands why he hates the Roidmude. “But why are you so impatient…”

“My father… the one who created the Roidmude… was my father. Banno Tenjuro. It was because my father let them run wild that they caused the Global Freeze and have taken so many lives.”

Well, speaking of coming out of nowhere!

So, I definitely expected Gou would have some reason for (suddenly, without warning) acting the way he did, all bratty and anti-Roidmude. It was either the Roidmudes killed their parents or, well, what Gou just admitted I guess.

This revelation just adds more questions though! Instead of actually answering anything. Now we’re left to wonder if Gou and Kiriko are even related or if Gou is a Roidmude himself or some hybrid or if both are hybrids and dad created robot mom or… well, anything really.

I get that people absolutely hate Gou. (Yet love Chief Nira. WTF! lol) And I might have too, but the sometimes sloppy development has made me actually empathize with him more than at least Kiriko or Shinnosuke or even Chase. Especially when it appeared like the show was just using and twisting Gou into the antagonist just to prop up the Kiriko-Chase love story, which itself has felt either epic or forced depending on the week.

Maybe they needed to use Gou to help empathize with Roidmudes. But really, they did a much better job with Kyu’s story with 072 than anything Kiriko or Shinnosuke has reasoned with to get you to believe Roidmudes can be good.

The revelation of Gou’s father (“father?”) also feels odd since we still don’t really know how Roidmudes even work. Belt-san created the technology but someone else took it? There’s someone else who worked on the project other than Belt-san and Harley? I feel like so much of Drive could’ve been done a little differently since there’s obviously some great story here. But it just hasn’t come together or developed in the most effective way.

Anyway, we’ll see if things get a little more clear in the coming episodes.

Elsewhere, I definitely like serious Chief Jun much more even though I do enjoy random, squeaky, weird Chief Jun too. Chief Nira though is really so over the top, it takes away from whatever level of seriousness the other story threads are trying to convey. The guy wiped his face on Shinnosuke’s back for goodness sakes. That’s obsessed K-pop fangirl behavior right there and he’s supposed to be a big First Division bossing. lol

So, it’s still Episode 27. And I’m still enjoying and having fun with the show. But man, do I really hope they pull the story together and get everything a little tighter moving forward.

Recap: Kamen Rider Saber, Chapter 29: At That Moment, the Swordsman Made His Move.