The leading three teams are in Cebu all ready to board a ferry for Iloilo City. But they are disappointed to find the next one leaves at 7pm.

Vince & Ed leave the Pit Stop on the way to catch a ferry to Cebu and they hope to see the other teams there with a “forced equalizer.” They are surprised to see AJ & Jody walk into the waiting area of the terminal.

Kelvin & JP share a happy reunion with the leading three teams as they wait for the ferry to Iloilo.

But much to their surprise as well, they see AJ & Jody are still alive! They quickly tell the leading three teams and the four of them all agree to vote for AJ & Jody since they are very lucky to have gotten a 2nd chance.

AJ & Jody walk in to cheers from the just formed alliance while Vince & Ed join the party as the six teams embark on a 13-hour ferry from Cebu to Iloilo City.

It’s the next day when teams arrive in Iloilo and they must now head to Pavia National High School for their next clue.

Teams quickly hop into taxis, Kelvin & JP into a tricycle. Phoebe is annoyed by all the roads under construction in the probinsya (lol).

And here, they find the Road Block.

For this Road Block, teams will choose a carabao and hinete/jockey who will pull them along a course from which they must grab three Race flags. Facing off against another team, teams must be the first to cross the finish line to grab the 4th flag and receive their next clue.

AJ and Yna are next to race. Yna chooses a white carabao. She doesn’t grab any flags because mud got straight into her eye. Jet says it’s because she sat on her ass instead of her foot. AJ decides to lay on the cart. And his strategy almost pays off, but he just misses his 3rd flag which would have won him the race.

Kelvin has JP help him choose which carabao to race. JP says to pick the one that’s very restless and fidgety.

Kelvin and Matt face off and it is very close. But Matt wins the face-off and he and Phoebe get the next clue.

Teams must now head to La Paz Public Market where they must eat a bowl of famous batchoy and find their next clue. WARNING! Once they’ve found the next clue, they must NOT tell another team. This huge mistake is a “No no!”

Also, teams must stop at the Must Vote board before leaving the High School.

Ed and Eji are on their 2nd attempt. Ed is already far ahead. But suddenly, Eji’s cart flips over and he falls off while the carabao is still running. Eji fights to get back onto the cart, right side up. He grabs two flags and his cart flips over again as he grabs the 3rd. He gets back into the cart and he crosses the finish line, excited.

But he doesn’t get the next clue because he has to grab the three flags AND still win the race.

Next up are AJ and Yna for their 2nd attempts. AJ’s carabao is faster and he manages to grab all three flags. Jet is surprised Yna only got one. 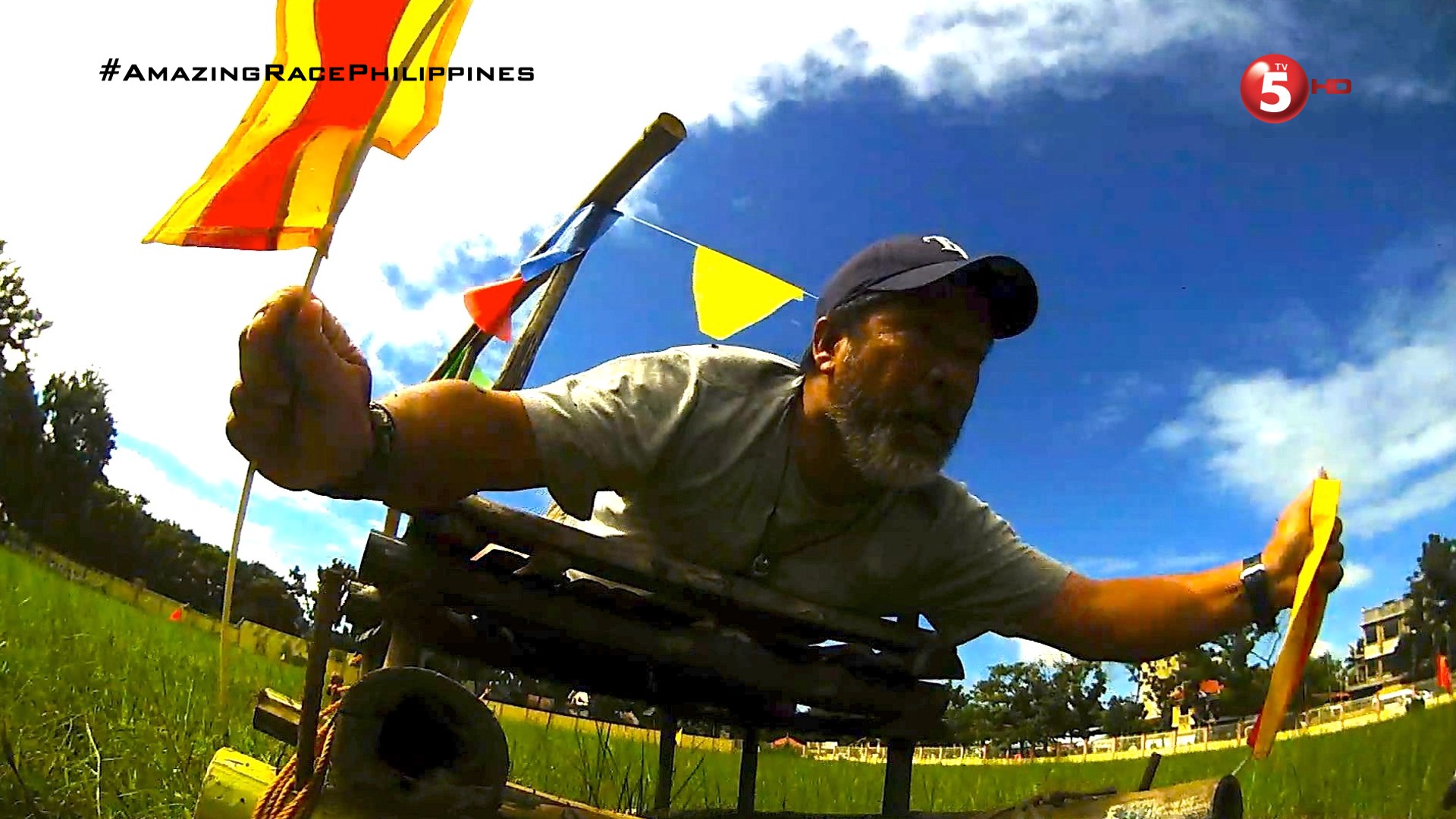 Eji and Ed are back for their 3rd attempt. Both of them fail.

Kelvin chooses a new, eager to go carabao and he now faces off against Ate Yna. Kelvin gets all three flags and finishes first so he and JP are off.

Eji and Ed are now on their 4th attempt. They fail again.

Next race is Eji and Yna. Yna’s carabao starts fast, but Eji’s catches up. It’s a close race and they both grab the three flags. But it’s Yna who just edges Eji for the win.

Roch & Eji and Vince & Ed were the first two teams to arrive and are now the last two teams left.

This is Eji’s 6th attempt and he finally gets all three flags and wins. He and Roch are out in 5th.

Vince & Ed are last. Ed is tensed up now as he has to face a local champion to win. And he does. But they’re definitely not happy being in last.

OoooooOO! This was an awesome episode!

It was good to see teams equalized on that 13! hour ferry from Cebu to Iloilo. But I was a little

But it won’t matter as long as AJ & Jody maintain the lead they’ve just built.

This task was AMAZING though! I loved it! First of all, it was a combination Double Battle/Duel Duel/Road Block! Interesting!

This was a great Road Block that’s like a not-as-insane version of a TAR4 Road Block in India where teams were actually dragged through mud by a bull. Also there was a cart racing task in a recent season, which I forget right now. But this is definitely a new task foreign TARs should stage whenever they visit the Philippines.

But I think this was even better as a Double Battle! It might just have been the best Double Battle/Duel Duel yet because no team is guaranteed to move on even when facing off against each other! I liked that part of the rules. You had to grab all three flags, but you still needed to have a fast carabao. Very nice!

Also great to see all the Road Block participants go 100% as well.