Recap: The Amazing Race Canada 2, Episode 3 – "Suck it up and get through it."

It’s the third Leg of the Race and teams find out they are leaving ol’ Canada and flying across the Pacific to Hong Kong.

With only one direct Air Canada flight from Vancouver to Hong Kong, Rex & Bob’s 5+ hour deficit is erased and all teams are on equal footing.

It is evening when teams arrive in Hong Kong. They must make their way to Lantau Peak and hop on a cable car up to Ngong Ping Village where they will seek a blessing from Buddhist monks at the Tian Tan Buddha.

Rex & Bob zoom into first place out of the airport with Natalie & Meaghan close behind them as they get to the gates of the Buddha which (HOURS OF OPERATION!) they find is closed until 8am tomorrow. But they spot a sign-up sheet for the blessings the next morning; three teams for each blessing.

After teams receive the blessing, they will climb up the 268 steps to the foot of the Tian Tan Buddha to search for their next clue.

Signed up for the first blessing are Rex & Bob, Natalie & Meaghan and Laura & Jackie. On the second blessing, Ryan & Rob, Alain & Audrey and Cormac & Nicole. And on the last blessing, Mickey & Pete, Sukhi & Jinder and Pierre & Michel.

The monks send the first blessing group off and they find the next clue directing teams to the Golden Dragon Statue on Hong Kong Island.

There, the teams find the Detour.
In Master Chef, teams will head to the Bo Innovation Restaurant where MasterChef Canada judge and fellow Canadian Alvin Leung aka The demon Chef, will hand them a shopping list of 10 ingredients:

Which they must purchase at the Wan Chai Wet Market.
In Kung Fu Master, teams will suit up and perform a kung fu routine. When the Kung Fu Master is satisfied with their performance, they’ll receive the next clue.

Rex and Bob are arguing over which Detour to do and ultimately decide on Kung Fu Master. Meanwhile, Natalie & Meaghan debate using the Express Pass. Laura & Jackie decide to do Master Chef.

Neither side of the Detour is easy as all the other teams catch up to Rex & Bob at the Kung Fu while Sukhi & Jinder choose Master Chef.

Natalie & Meaghan decide to use the Express Pass and they get the next clue telling them to go to She Wong Lam restaurant on Hillier Street in Sheung Wan.

At the wet market, Laura & Jackie find an English-speaking lady who helps them find the stuff they need. Sukhi & Jinder are having some trouble

Meanwhile, Natalie & Meaghan arrive at the restaurant and find the Road Block.

In this Road Block, teams will enjoy a local Chinese delicacy. The restaurant snake master will pick a snake to present to the Racers before he extracts its gall bladder which he will empty of its bile for the Racers to drink. Racers will then have to finish a bowl of snake meat soup to receive their next clue.

Meaghan decides to do the Road Block and is able to stomach it pretty quick. They now have to make their way to Shim Sha Tsui, the Avenue of the Stars where they must find the Bruce Lee statue.

Back at the Kung Fu, Rex & Bob are the next to finish, but they cannot find a taxi.

Cormac & Nicole get to the restaurant and Nicole does the Road Block, even if she’s freaked out by the gross snakes.

Pierre & Michel and Mickey & Pete are the next to complete the Detour. Ryan & Rob manage to get through it, even though they arrived last. That leaves Alain & Audrey who are now in full French-speaking mode when they believe they are in last place.

But really in last place are Sukhi & Jinder and Laura & Jackie. The married couple finally find the elusive Canadian maple syrup, but when they hurry back to Chef Alvin, he scolds them for bringing him fresh pepper instead of peppercorn. He yells at them to go get the correct stuff.

Natalie & Meaghan arrive at the Bruce Lee memorial and now they must receive coaching from a local film director to help them strike a series of classic action film poses before they can receive the next clue.

They do two poses and are off to the Pit Stop, the Kowloon Walled City Park where they check-in first and win their 3rd straight Leg of the Race. They also win a trip to China and $2000.

At the restaurant, Pierre & Michel intentionally point Mickey & Pete in the wrong direction, multiple times and they (along with Ryan & Rob) run around the street in circles before seeing the brothers dash inside.

Laura & Jackie head back to Chef Alvin with the correct pepper and he congratulates them with the next clue. Sukhi & Jinder are now officially in last, but the “Demon Chef” smiles as he hands them the next clue.

Bob finishes the snake soup and Alain is close behind. But a taxi driver tells Rex & Bob to walk to the Avenue of the Stars while Alain & Audrey hop in a taxi.

Rex & Bob realize their mistake, but before they hop in a taxi, a Toronto native recognizes the famous Rex Harrington and asks to shake his hand.

Laura & Jackie cannot find a taxi, allowing Sukhi & Jinder to arrive at the Road Block in 8th place. Sukhi stomachs the snake and they leave.

It’s a “foot Race,” but Sukhi & Jinder finish Team #8 and are still in the Race. That leaves Laura & Jackie in last and eliminated.

Episode Thoughts
Awesome Leg. It was definitely great to see the Race leave Canada. I’m still surprised at how many TARCDA fans were upset that the show would even dare leave the country. It’s very strange, especially coming from Amazing Race fans.

Anyway, this was definitely a very full Leg, but it didn’t feel rushed like the first Leg did with its long list of tasks and Route Markers. It’s great to have lots of Route Markers, but they better be sure to edit it well even if the tasks may be lacking.

The Hours of Operation for the monk blessings was a necessary Route Marker after the transpacific flight. But it definitely was a lucky break for Rex & Bob. They might not have had a shot in hell to survive another Leg if it weren’t for that flight across the Pacific.

The Detour was fine, though likely horribly unbalanced, especially when the Master Chef Detour had such obscure ingredients that apparently could only be found in one random store. The U-Turn, which was indeed present and used on this Leg: 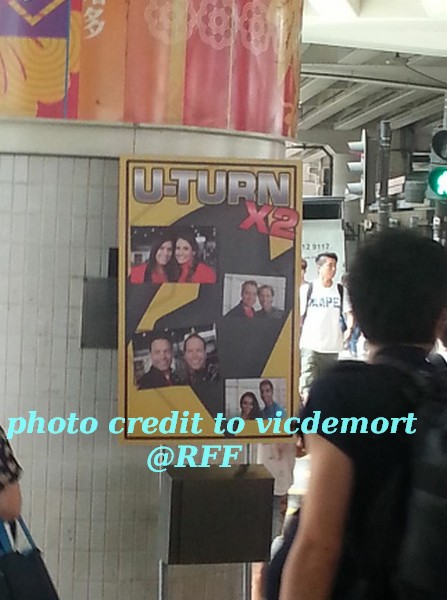 would’ve been guaranteed death for a team had it been used by anyone other than the already trailing teams on teams who had already finished ahead of them.

The Road Block was an opportunity for that “exotic” flavor that TARC just wouldn’t be able to have in a Canada-only Race. But snake soup is definitely not the most disgusting thing you could eat. The action movie poses task was lame, but it’s something extra at a Route Marker, so oh well.

Still, it was a nice Leg for competition and refreshing for TARC to go international.

One thing though, the teams are so unquotable, the show had to go with a generic “Snakes and Liars” episode title instead of a witty quip. =(

Sukhi & Jinder are still my faves at this point. Sad that they chose the wrong Detour, but happy that they managed to make it through. They were still fun and still Raced hard even when faced with elimination. Natalie & Meaghan seem to be unstoppable right now. And thankfully, they are fun and interesting personalities and not just some bland dominant team we are used to seeing on the Race.

Mickey & Pete are still cool. I’m definitely enjoying their good Racing and laid back vibe. I’d still like to see them be a little more competitive though. Alain & Audrey need more French meltdowns please. They remind me of a French-speaking Richard & Joey (TARAu), but more bickery. (That’s not a word.) Speaking of bickering, Rex & Bob were huge fails last week, but I can’t help but enjoy their hilarious arguments. And in fairness to them, they stepped it up this week and prove they can be great Racers if they just push through and not quit every task.

Cormac & Nicole seem to have lost some of their awesomeness over the last three weeks. They opened strongly and are now just meh and almost feel kinda forced. They’re still a solid team, but I don’t feel like their competitive nature is very exciting anymore. Hope that changes. I want to see more of that Nicole who wanted to U-Turn Olympians.

Pierre & Michel‘s snarkiness returned this Leg with their almost absurd attempt at pointing Mickey & Pete in the wrong direction. It was pretty futile considering they were all on the correct street, but it was hilarious to watch and even funnier when you see it’s a pair of big French-speaking twins trying to deceive with an accent. lol

Ryan & Rob may be likeable, but dude are they boring. Nothing out of them this Leg. And Laura & Jackie were also very bland even on their last episode, which is a great contrast to their promising start.