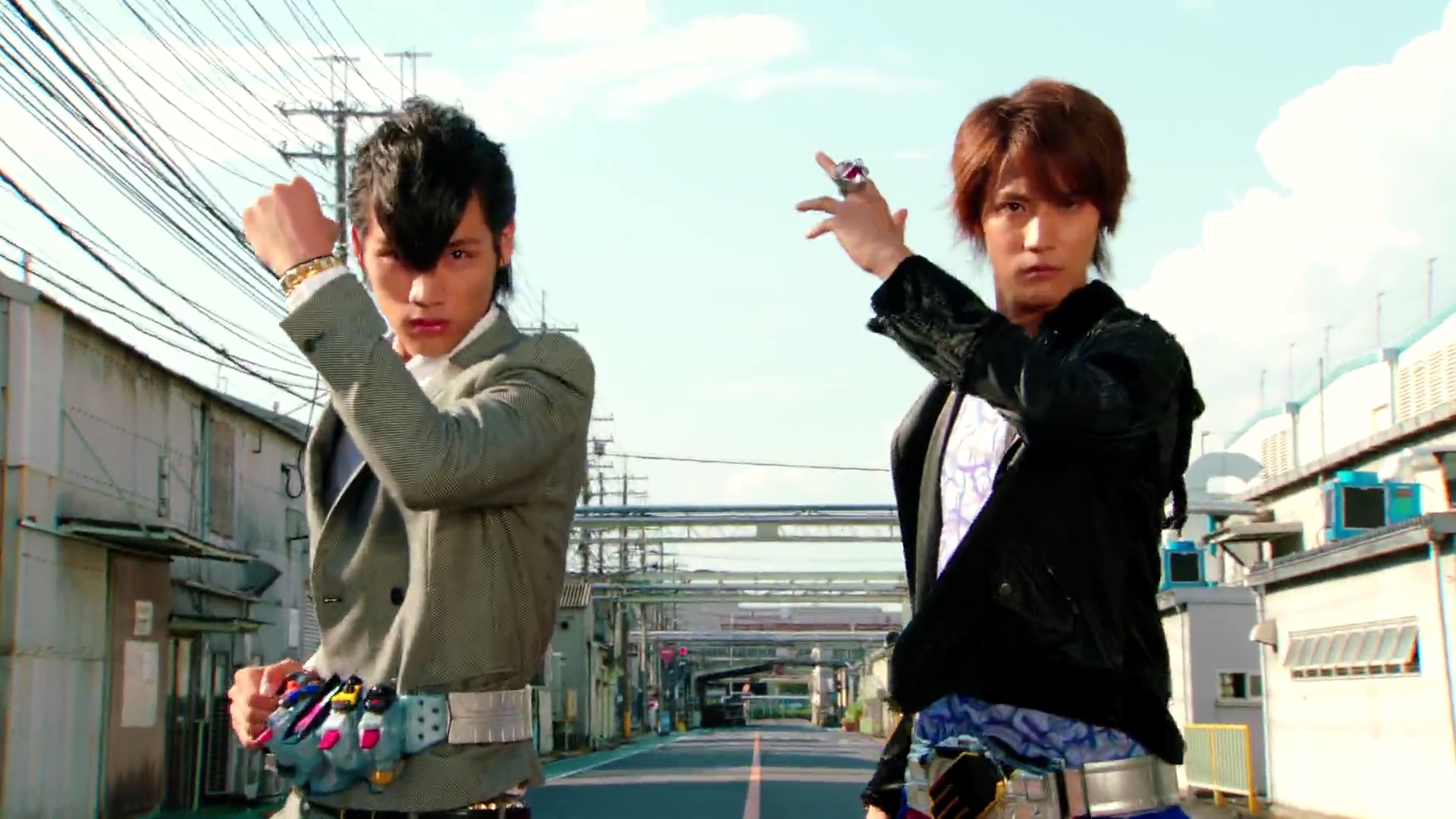 Now this was my very first Kamen Rider Movie War. And damn, did I get lost.

I read about the film being divided into different parts, but I guess I didn’t really understand what that meant. Especially with me being used to the Sentai vs. movies or simple Power Rangers team-ups.

It was definitely a different feeling watching this film from watching the separate Fourze or Wizard movies, or even the Super Hero Taisens.

Maybe it was the interesting format, but big chunks of the story itself felt very hollow to me which in turn lessened my enjoyment of it.

First of all, once I got used to how the movie worked, I was able to slowly appreciate the overall premise of it. The time traveling aspect was used pretty well, both to connect both series and to provide a basis for the main conflict.

But I think my biggest problem with the movie was that the biggest parts of it included a character I didn’t care about at all. That is, Nadeshiko was a character I never even met before, let alone one I didn’t grow to love over 50 episodes and a movie.

She meant absolutely nothing to me. And I guess that’s on me since I didn’t see the OOO-Fourze movie. But still, her having such a big part in the movie really lessened my emotional connection to what was happening on screen.

Like, “Who is this interloper and why am I supposed to be as happy as Gentaro seems to be?”

At least with Poitrine and Yu Kamimura, it was someone Haruto was meeting for the first time. And it all comes together at the end when she’s revealed to be Donut Shop Owner and it makes sense.

I had no such feeling for Nadeshiko or her apparent love story with Gentaro. Never mind that I’m a Yuki-Gen-chan shipper. But I felt everything Nadeshiko did in the film could’ve just as well been given to Yuki.

And that made the lack of Yuki in the movie even more upsetting. This new girl basically took Yuki’s entire possible story. And in turn, the Kamen Rider Club was never actually fully reunited. All through Fourze, I was wishing Yuki would get to be a Rider, even for a little bit. And now this ball of galactic light energy is not only a Rider, but a more important character in the grand scheme of things? No thank you.

This movie has probably already sullied my opinion of her going into the OOO-Fourze movie. But it’s okay, she’s inconsequential to my enjoyment of Kamen Rider Fourze as a whole anyway.

It’s interesting because while it definitely helps to be familiar with all the characters and seasons these team-ups and crossovers include, it’s not always necessary. I enjoyed Super Hero Taisen Z more than Super Hero Taisen because the main characters (Yoko, Gai, Haruto) were from seasons I actually watched and enjoyed or loved. While I was familiar with Kamen Rider Decade, I hadn’t really watched the season yet or knew of the relationship between Tsukasa and Kaito. But I still enjoyed the first Super Hero Taisen.

In Movie War Ultimatum, I absolutely did not enjoy Nadeshiko, but I was thoroughly amused and interested in both Poitrine and Sanagiman/Inazuman. Even though I know nothing about either classic property.

The revelation that the four kids in Wizard would grow up to be the Monster Alliance in Fourze was good, but if I wasn’t so wrapped up in things I didn’t understand or cared about, that moment of realization and thinking about how Gentaro’s old picture came to be that way, it would’ve totally been a MaGMCM, but it unfortunately wasn’t.

There was definitely still lots to enjoy though, for me.

It was great to see the REAL Kamen Rider Club together and checking in with them five years into the future, each of them happy and successful in their respective careers.

Gentaro meeting Gen-chan played out exactly how you’d expect that strange meeting to play out. Ryusei and Tomoko’s reunion was absolutely sugary sweet.

That final CGI battle was pretty much a huge insane clusterfrak of both awesomeness and randomness. I didn’t know who directed the film before watching, but it wasn’t hard to guess it was the Koichi Sakamoto himself.

This film may have been the most Koichi I’ve seen Koichi Sakamoto ever be in a toku production.

The other action was really good though. The standouts were definitely Rinko getting to be the kick-ass cop she only showed glimpses of in the series. There was the Kamen Rider Club reuniting and being their badass selves like they showed in the Fourze movie. (Though, minus Yuki. Hmph.) And the kickboxing Haruka-sensei getting to show off her skills was awesome too. Ryusei and Inga Blink’s opening fight scene was an exciting way to start the Fourze portion of the movie.

Now, I’m writing this after only one viewing, but I think it probably needs several for me, or maybe I should go watch OOO-Fourze first. I really was thrown for a loop with the way the move is set-up. But at least now, I’ve found out that’s the format for all the Movie Wars.

So while this movie pushed things I absolutely don’t care about or skimped on the things that I do care about, overall it was fun. For crossovers and team-ups and reunion movies, if the story doesn’t necessarily cut it, at the very least you can enjoy seeing some of your favorites one more (or last) time. I guess that’s my overall feeling for Movie War Ultimatum.

Good Ol’ Review: Charming, Thought-Provoking “Expiration Date of You and Me”

Check-in Review: After Wrapping Up Season 2, “Penthouse” Continues to be a Soapy Oasis on Korean Television