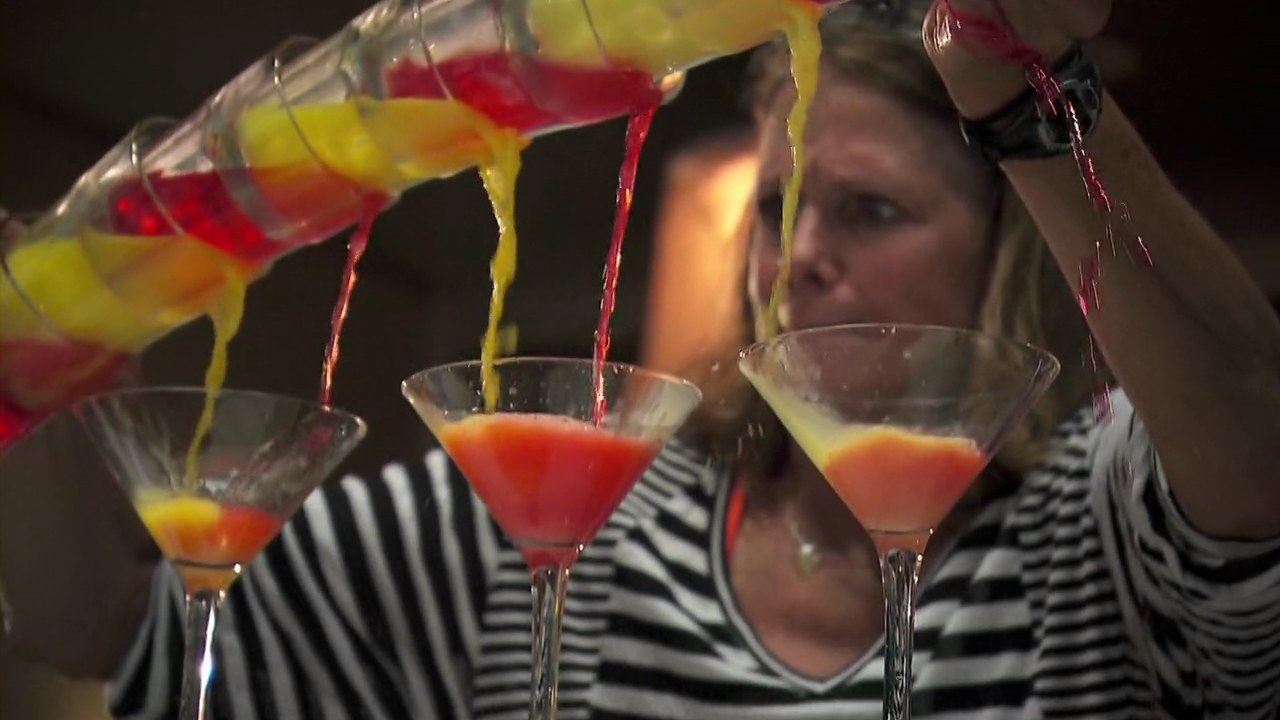 Teams start out the fourth Leg of the Race by first heading to the longhouse at Prince Philip Park where they immediately find the Road Block.

For this Road Block, teams will take part in a traditional Marut cultural competition where they will jump on a bamboo trampoline known as a Lansaran to grab the flag above them adjusted to their height. 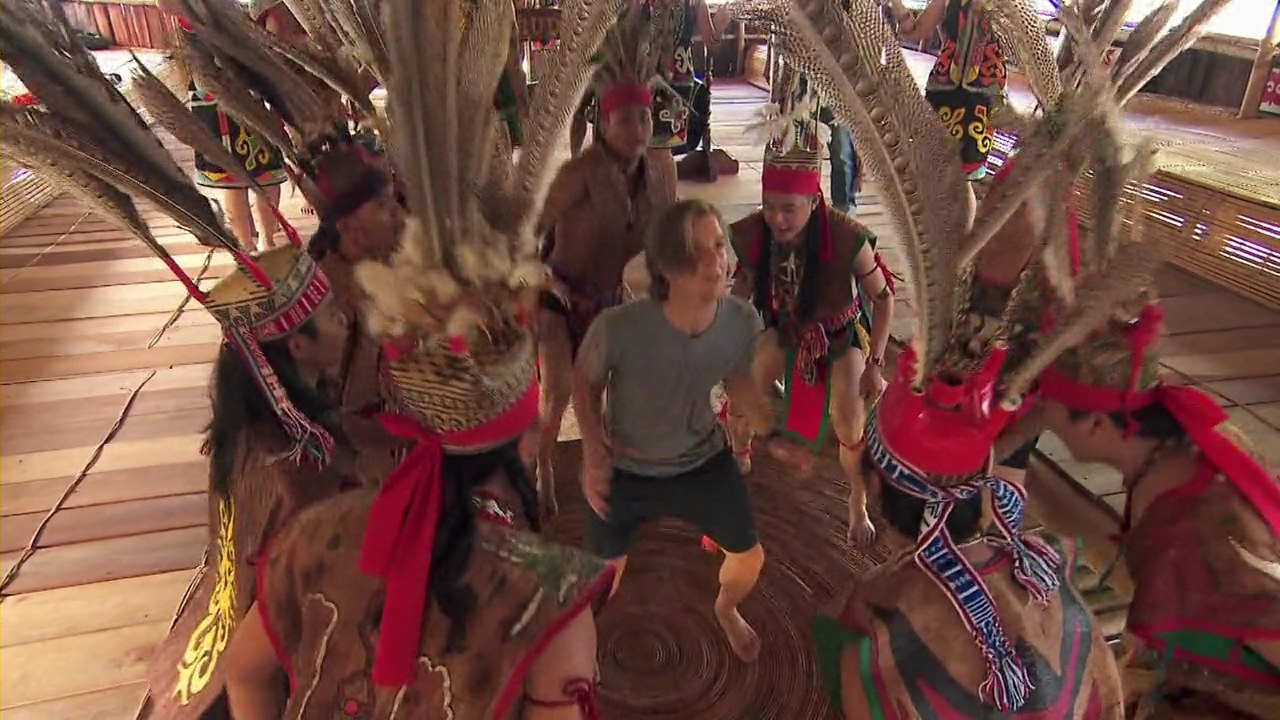 Cord starts the Road Block first, but struggles allowing Connor and Leo to pass him and Jet. It takes Cord 47 attempts. Luke and Big Easy are next and don’t have as much trouble.

Caroline is up and she has trouble trying to get the rhythm. Jessica decides to do the Road Block, but gets her feet bloodied up in the process.

Brendon & Rachel leave the Pit Stop in last and when they get to the Road Block, Rachel decides to do it. She slips up at first thanks to her pantyhose. But once she takes them off, she easily grabs the flag. 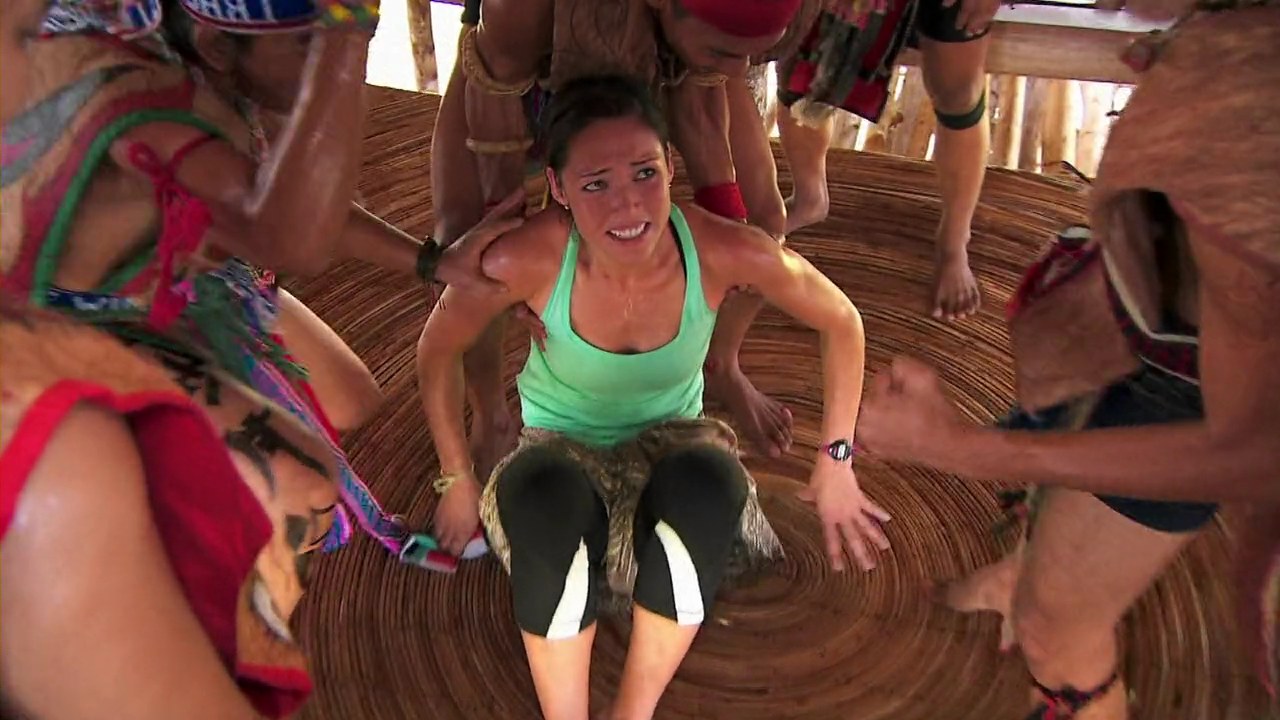 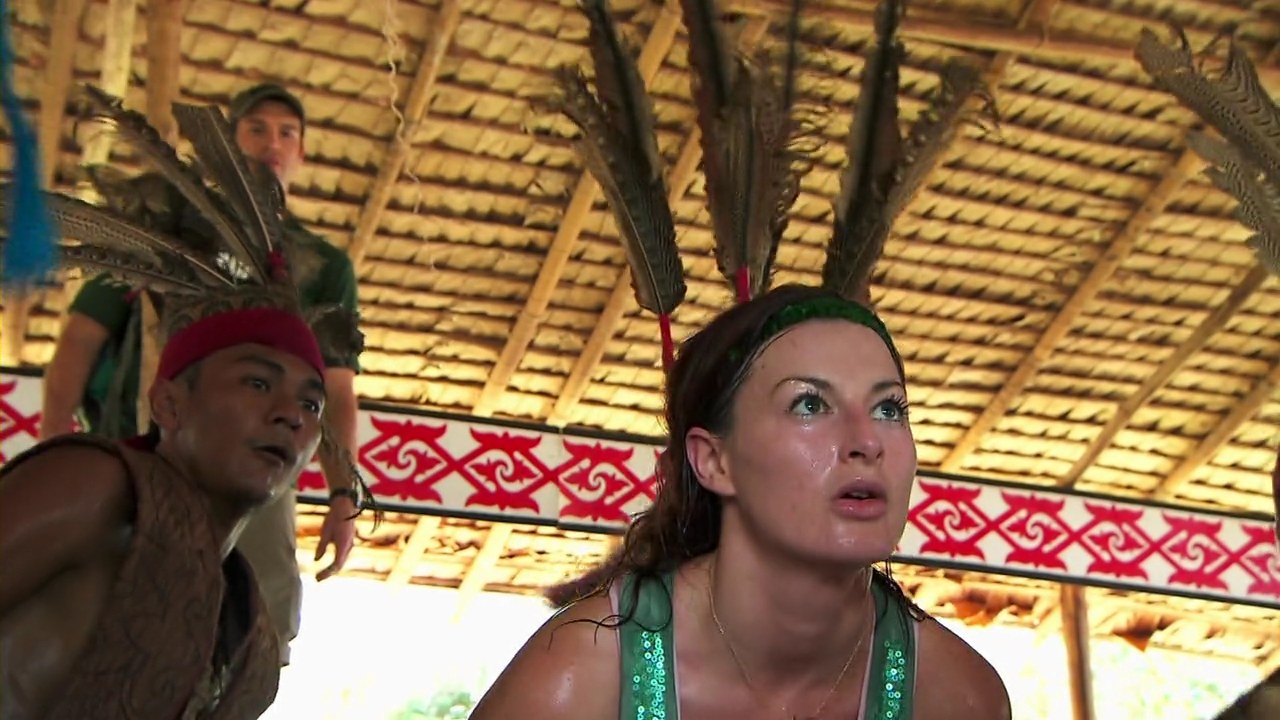 The teams are at Kota Kanabalu International Airport where they’ve bought tickets on one of three provided flights to Kuala Lumpur. On the first flight are Dave & Connor, Leo & Jamal and Jet & Cord. On the second flight, scheduled to depart an hour and a half later, are Margie & Luke and Flight Time & Big Easy. And on the last flight, leaving 45 minutes after the second, are Brendon & Rachel, Caroline & Jen and Jessica & John. 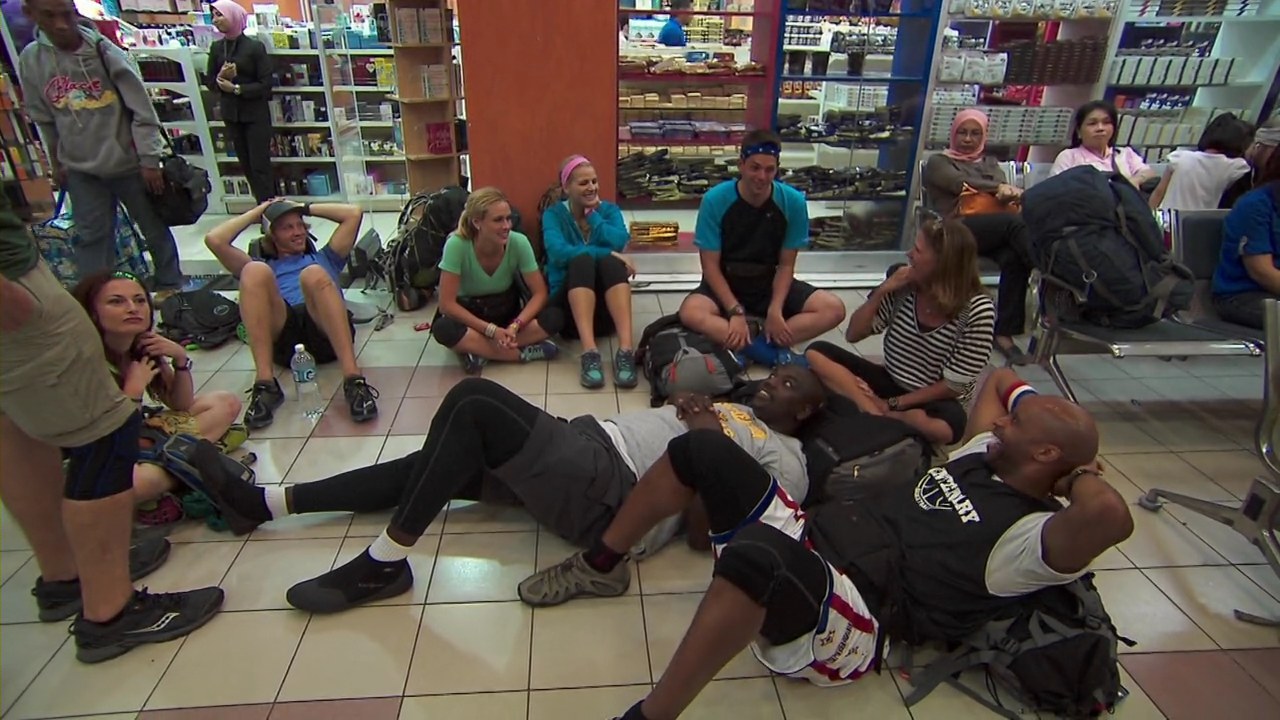 After the first flight leaves, the remaining teams find out the second flight is delayed 50 minutes. So now the two flights will be departing within minutes of each other.

It’s 9:42pm and the first flight arrives in Kuala Lumpur. Teams must make their way to an intersection at Jalan Ampang and Jalan Yap Kwan Seng near the Petronas Towers for their next clue. 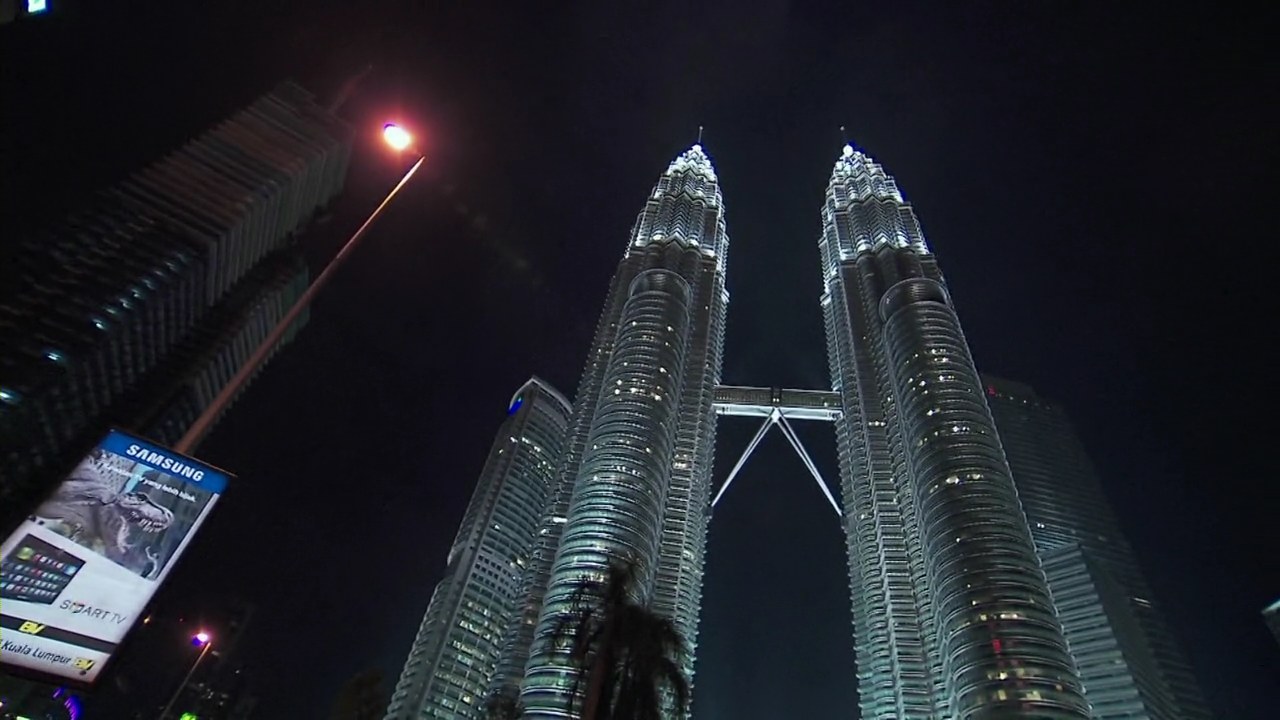 Leo & Jamal arrive at the cluebox first and open up the Detour.

For this Detour, teams will head to the Sky Bar at Traders Hotel.
In Mix Master, teams will learn how to scratch. When they’re ready they will go to a DJ performance booth and must each repeat seven different tracks using the turntable. If they can correctly follow the beats, they’ll get the next clue.
In Master Mix, teams must mix seven drinks, four red and three yellow, and pour them simultaneously into a pyramid of glasses without mixing the colors. After delivering a tray of cocktails, they’ll get the next clue.

All three teams choose Master Mix, but they find it isn’t as easy as it seems. 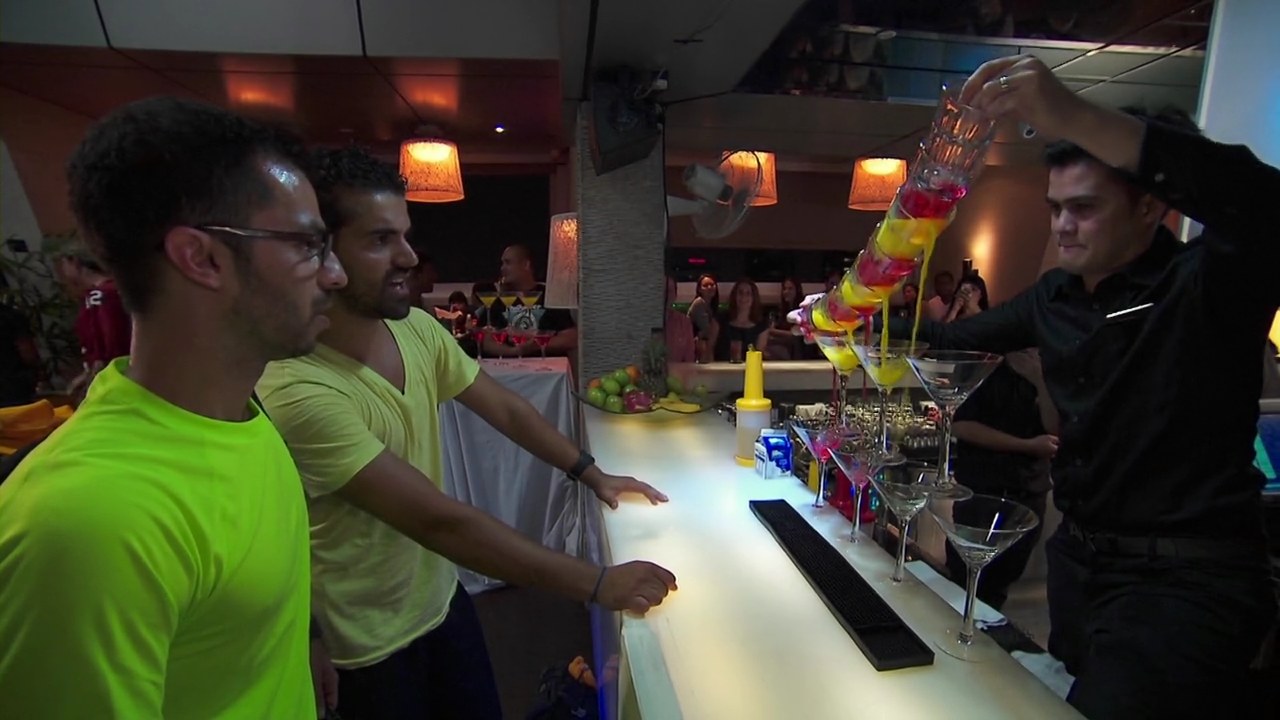 The 2nd and 3rd flight arrive at 10:58pm and 10:59pm. Margie & Luke and the Globetrotters decide to share a van, as do Brendon & Rachel and Jessica & John. Caroline & Jennifer take their chances and find an available taxi outside.

Back at the Sky Bar, Leo & Jamal decide to switch Detours after Jet & Cord manage to finally, cleanly fill their glasses. As the last five teams arrive, Dave & Connor get their glasses filled and they try and catch up to the Cowboys who are on their way to the Pit Stop at the Batu Caves.

Leo & Jamal are shocked when Caroline & Jennifer, Jessica & John, and Flight Time & Big Easy join them in the DJ practice room. Brendon & Rachel and Margie & Luke decide to do the drinks.

Flight Time & Big Easy try the DJ performance first, but fail on the first verse. Leo & Jamal try and they get it. They head to the Pit Stop. But it’s the Cowboys who win their second Leg of the Race and a trip to London. Dave & Connor finish 2nd and Leo & Jamal have to settle for 3rd.

Caroline & Jen, Jessica & John and Flight Time & Big Easy get their beats down and step on the Mat as Teams #4, #5 and #6 respectively.

That leaves Margie & Luke and Brendon & Rachel fighting for last as they struggle with the drinks. The frustration gets to Luke who smashes the glasses on the floor before going to the bathroom to cry.

Margie tries to calm Luke down and tells him to clean up his mess. Brendon & Rachel try to encourage Luke as well and they cheer for him.

Luke suggests they take the penalty together. But Rachel says no, they can do this. They have to do this and Race it out. Margie says she thought Rachel was the biggest crybaby ever, but she was really there for her and Luke tonight.

Rachel’s encouragement helps Luke finally settle down and he and Margie finally finish the Detour. They hurry off to the Pit Stop where Phil officially checks them in as Team #7.

Brendon is just about ready to quit, but Rachel says nope. They can’t give up. They have to keep going. She takes Brendon’s hands and says a prayer asking for strength. They push through and complete the Detour, 3 hours and 12 minutes after they started.

They head to the Pit Stop and run to Phil who tells them they are the last team to arrive. But he doesn’t waste any time in telling them this is a non-elimination leg and that they will have to complete a Speed Bump on the next Leg.

Episode Thoughts
This was a very interesting episode. This was the first time in a long time that the teams actually flew in the middle of the Leg. And not only that, they had the Road Block and Detour on either side of the flight. That pretty much signals a non-elimination Leg.

But before we get to the tasks, this season has seen a lot of provided flights for the teams. No travel agency and airport finagling. TAR gives them flights and allots a specific number on each so teams are separated into groups right from the start. Why is TAR hampering competition? Is it really that difficult for them to handle the logistics of eight teams Racing and doing tasks at the same time?

There are a lot of things TAR needs to do to fix itself, but even just letting teams compete side-by-side would increase the excitement of the show just like that. It is inexplicable.

Anyway. The Road Block was okay. I actually would’ve liked to have seen that just be a regular Route Marker with a different Road Block and a Detour. If this were a pre-TARAS season then that would’ve been the case. Have both the Road Block and Detour post-flight even with that task before the flight.

The Detour was okay. I think this would’ve been a great U-Turn Detour since both were at the same location and hectic atmosphere would’ve been great to foster drama. Though I guess Luke wouldn’t have been able to do the DJing Detour had they been U-Turned.

It was great to have a night Leg even though they spent most of it indoors. I still want to see teams running around the big city at night.

A solid episode and Leg.

Well imagine that! What a positive edit for Brendon & Rachel. They are definitely running that BB13 redemption story arc for their 2nd appearance on TAR. Of course, I’ve always been a fan. But like on BB13, they changed a lot of haters’ opinions of them and especially of Rachel. A sign language “applause” and a little player can do wonders with the TAR casuals apparently. But it was definitely great to see that side of Rachel which she displayed plenty on BB13. Though knowing Rachel, there were probably some meltdown-worthy moments at that Detour that TAR conveniently left out. Fine by me.

This season though. Jessica & John are my #2 team!? Much kudos to Jessica at the Road Block. And she and John would be a fine typical dating team if not for the lingering “Oy vey” memories. And what is this? Flight Time & Big Easy are #3. What in the world is happening? But yes, giving a little Malaysian kid a headband is a nice little gesture. And they were mostly innocuous this Leg. Thank goodness.

Margie & Luke. It was hilarious to have another flashback to a Luke fail moment from the tea Road Block in TAR18. But WTF at suggesting to quit to and take a penalty. That’s a no-no and they should know better that being one of the 3-time veterans.

Leo & Jamal would’ve been higher on my list had it not been for the return of their horrible mugging. Ugh. Dave & Connor are alright, but Dave’s incredibly boring exposition is starting to get very annoying. Why must the TAR editors include his lengthy and flat descriptions of every single thing that’s happening on the Race. It’s crazy boring and a buzzkill.

Caroline & Jen whining again and then doing stuff anyway. Okay. And Jet & Cord. Their theme music is one of the worst things ever. And now that they’re doing Saban Brands-level puns makes me dislike them even more.

They’re back!
Over 360 Episode Caps from this episode are now available at
photobucket/xangatheamazingracecaps3