Wu is at the mental hospital, drawing pictures of the aswang. Hank is trying to convince the others, over donuts, to tell Wu everything. But the others refuse.

Wu is in a therapy session and describes what he saw of the aswang as well as what his Lola told him as a kid.

“How could it be real if you’re the only one that saw it?”

Nick and Hank visit. Wu describes his stay and how he has no tumors or lesions or anything like that, he just hears his dead Lola’s voice in his head all the time. Hank keeps looking over at Nick. 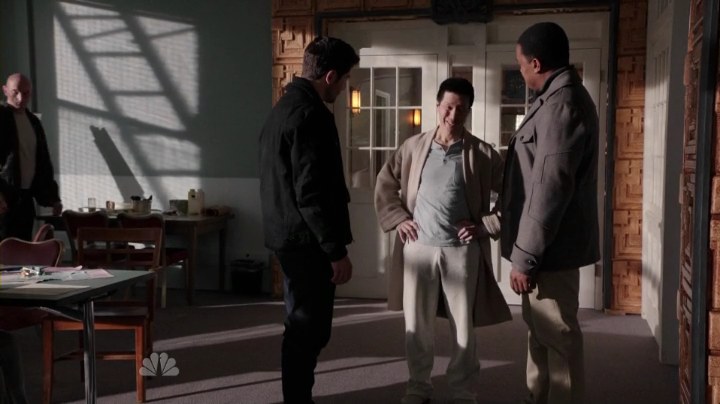 Nick and Hank have to leave when they get the call of a dead security guard and a perp (who is a Wesen) who are found in a university lab that currently has a newly found sarcophagus as its guest. The Wesen and his partner had wanted to retrieve it.

The sarcophagus has the image of an Anubis, the Egyptian god of the dead. On the wall, the Wesen had spray painted symbols meaning “I protect the dead,” part of an inscription inside King Tut’s tomb some think of as a curse.

At the station, Nick and Hank pow-wow with Renard and find info on Karl, the surviving suspect who they think could be Wesen.

Over in Austria, Viktor calls Sebastian in to talk. And by talk, he means pouring liquor into his mouth and forcing him to rat out his Resistance friends.

Elsewhere in the country, Meisner is out in the forest and hears a baby crying. It’s Adalind’s daughter out in the middle of the woods. Or so he thinks. He picks her up and takes her back to the cabin, but Adalind says the baby’s been with her the entire time. Meisner looks down to his bundle of… wood.

He tosses the firewood into the hearth and he tells Adalind that he could’ve sworn her heard the baby’s heartbeat. Adalind flashes back to the doctor saying she thought she heard two heartbeats in her belly. The wood suddenly ignites into a big, warm fire. How is any of this possible? Only she can answer that, Adalind says, referring to baby.

The Gang is at the spice shop looking over the photos of the mummified Anubis. Monroe and Rosalee explain that many Egyptian gods were Wesen and Anubis was one. And they are not extinct so it is very possible they are involved here.

Nick shows them the “I protect the dead” graffiti and Monroe and Rosalee immediately think the Beati Paoli, a secret vendetta society of various Wesen who work to preserve Wesen culture created in the 17th century. They go after museums, archaeological digs and even private collectors. Monroe and Rosalee don’t necessarily agree with the methods, but they certainly share the sentiment. Displaying a fully woged Wesen is immoral, sacrilege, disgusting.

Nick, Hank and Juliette head to the trailer. Monroe asks if they should inform The Council, but Rosalee says they probably know by now and if the Beati Paoli is involved, the less they are involved, the better.

But man, Monroe thinks, they were gods once. “What happened?”

Wu is having nightmares of the Aswang and tries to convince himself that it isn’t real. 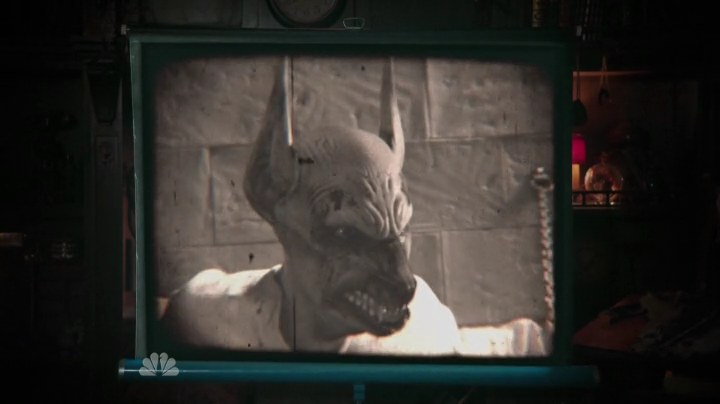 At the trailer, they find a film of a Grimm’s investigation of a murder at a dig site in Egypt in 1928. It shows the Grimm provoking the Anubis to woge and admit he was a member of the Beati Paoli. Pharaohs believed being buried with an Anubis would ensure they would become gods themselves. So pharaohs tortured slaves just to find one.

The Beati Paoli Anubis only wanted to give the mummified Anubis a proper burial.

Back at the shop, Alexander from The Council appears wanting to see the Grimm.

Nick and Hank go to talk to Professor Gates to warn her that the guy who broke in will try again, but he doesn’t care, she just wants to keep researching the mummy.

Monroe calls Nick to tell him about Alexander. They’re at home now and Nick agrees to meet there.

Renard cannot contact Sebastian who is currently being waterboarded.

Juliette visits Wu at the facility. She says she’s been through something similar recently, like seeing ghosts. But she got better after she got over her fear of what she was seeing.

Monroe and Rosalee think it’s very unnerving for The Council to ask a Grimm to kill a Wesen.

Karl has broken in to Professor Gates’ home and forces her to call off the security at the university.

Over in Austria, Sebastian has spilled the beans and Prince Viktor has a couple of his goons with him to search where Meisner and Adalind were dropped off.

Meisner is cooking breakfast. Adalind thanks him for taking care of “us.” She says it feels weird to think that she’s now “us.” Do you have anyone? she asks.

Meisner says his girlfriend was tortured and killed by the Royals two years ago.

He gets a call. It’s Renard and suggests they move now. He’ll help make arrangements.

Back in Portland, Wu is thinking of Juliette’s words from earlier.

Across town, Nick and Hank find Professor Gates is not home so they assume they are on the way to the university. Hank gets a call, seems Alexander was lying about how long he’s been in Portland.

They hurry to the university where Alexander also is, waiting behind the science building. Nick calls Monroe and Rosalee to come help.

The Professor brings Karl to the lab. He woges and hurls her across the room and Nick and Hank arrive. Nick fights Karl. I think we’re done, Nick says. But Karl says it’s not done until it’s done right. They arrest Karl and Nick tries to explain what happened to the Professor.

Nick and Hank head back to the lab and find the Anubis is gone. Monroe and Rosalee are keeping watch and tell Nick that Alexander has the Anubis.

Nick tops Alexander before he leaves the scene and hops in the car with him. They talk for a little bit. But by morning, Nick and Hank are watching as Alexander, Monroe and Rosalee give the Anubis mummy a hunter’s proper burial.

Afterwards, Nick and Hank pick Wu up from the facility. He’s going home. He tells Nick and Hank that what he saw wasn’t real. At all.

Back in the Alps, Viktor and the goons get to the cabin, but Meisner, Adalind and baby are gone. They hurry through the forest.

Episode Thoughts
An alright episode. After last week, I guess it’d be tough to have such a full episode.

But there were still plenty of developments. First, there’s Monroe and Rosalee feeling very passionate about wanting to respect their Wesen culture. It’s been very interesting to see the show tackle racial and ethnic issues via the Wesen world.

Wu’s little stint in the psychiatric clinic I guess gets him back to being oblivious? Which can be both great and really bad. Great because it will continue the fun of him not knowing what’s going on. But really bad because he now has experienced a Wesen, things shouldn’t be able to go back to being the same anymore. If he did finally get clued in, Grimm would lose that aspect of the Gang having a Kehrseite as a close friend. But I really agreed with Hank. Who knows what the experience, if gone unexplained, will affect Wu in the long run. We see him laughing it off at the end of the ep, but when his Mananangal or Tiyanak friends move to Portland from the Philippines, all hell will break loose! lol

And of course the adventure in Austria. Adalind and scary baby are on the run and it looks like they’ll be heading back to Portland soon. I can’t wait to see Mama Burkhardt again and that she brings Adalind to Nick and Juliette’s home is hilarious and very exciting.

So the episode was okay, but the preview definitely has me excited for the coming episodes.

Miss the episode or want to watch it again?
Download full episodes of Grimm, Season 3 on

.
Also at Amazon, Grimm, Seasons One and Two on Blu-Ray and DVD.