Review: Your Noir and Came To Me and Became a Star Are Excellent, Engrossing Examples of the KBS Drama Special

: GOOD OL’ REVIEW
SPOILER ALERT! Full discussion of the two drama specials, but there is fair warning after a little intro to both.

KBS Drama Specials continue to present some of Korean television’s best and most unique stories. And two recent Drama Specials are excellent examples of that fact.

Now since my review will pretty much spoil both stories, I will say right now that both are well worth your time. And you can watch them both right now thanks to KBS World posting every Drama Special episode on their official YouTube.

The first drama is Your Noir starring 2PM’s Chansung as Hyung Joo, a new recruit in an “organized crime” gang whose boss wants to bring down a pesky prosecutor by finding clear proof of the prosecutor’s abuse of his wife. Turns out, the prosecutor’s wife (Chae Jung Ahn) is Hyung Joo’s former high school teacher who he had feelings for.

The second drama is Came To Me and Became a Star starring Kim Ji Suk and Jung So Min as two 20-somethings who are struggling to make a living and must live in a youth hostel. After getting paired up at a blind date meeting party, they start dating but hide from each other the fact that they are practically dirt poor.

Both dramas presented a core romantic story set against two very different backdrops. And both dramas featured heartbreaking and tragic endings for both would-be couples.

But both endings were not tragic just for the sake of being tragic and different from the normal feel-good 16-episode primetime drama. The endings to both stories were appropriate and fitting conclusions.

In Your Noir, we witness Lee Hyun getting beaten to a pulp numerous times by her prosecutor husband (Hong Kyung In). We even get confirmation from a doctor she sees to discuss her broken ribs, bruised and bloodied face and the constant ringing in her ear.

Hyung Joo just got out of prison before becoming the maknae in a group of gangsters. But before getting thrown in jail, he had been a good student, if even only relatively so, and a promising judo athlete who had been scouted by several universities. Lee Hyun was the young, new Literature teacher and Hyung Joo immediately felt drawn to her. His developing crush on the beautiful young teacher ends up being the reason he gets thrown in jail, his promising future gone.

Being a young, new teacher, Lee Hyun is timid and a little weak, especially in a Korean school system that has no answer for delinquents and disrespectful students. Lee Hyun gets mocked and threatened by the students with the school unable or unwilling to do anything about it. After one bully gets in Lee Hyun’s face, she runs off to the nurse’s station where Hyung Joo later sees her crying.

That puts him over the edge and decides to take justice into his own hands, challenging the bully to a fight. Being a talented judoka, the fight is heavily in his favor, but after a cheap shot by the bully, Hyung Joo pushes him off only to have him hit his head on a table and die.

While he is told to get closer to Lee Hyun in order to dig up some proof of her husband’s abuse, Hyung Joo makes it personal, his feelings for her still there. He promises to protect her. Lee Hyun is conscious of her every move, fearful that one wrong breath will draw the violent hand of her husband. But she allows herself to feel comfortable with Hyung Joo until he reveals that he actually is in a gang and not a university student with a judo scholarship. He offers to have her husband killed, but she pushes Hyung Joo away and says he is no better than her scum of a husband.

As soon as the prosecutor sees his wife may be fooling around with Hyung Joo, the very criminal he had set free a few weeks earlier, he strikes a deal with the mob boss to have Hyung Joo killed.

It is only after he dies that Lee Hyun finds out the reason Hyung Joo’s life was forever ruined and comes to the painful realization that maybe if she had found just a little more strength, she’d be free of her violent marriage.

In one sense, Hyung Joo’s death was shocking. Of course you want to see the scum of a husband get what’s coming to him. That’s the logical conclusion you’d want as a viewer. But sadly enough, that he gets off scot free, Lee Hyun is still trapped and the noble Hyung Joo is now dead is a realistic ending.

Your Noir is an interesting and realistic portrayal of the corrupt world we live in today; where public officials collude with mobsters and the innocent get caught in the crossfire. And here, it is the innocent love Hyung Joo has for Lee Hyun that gets caught. It’s hard to watch the bad guys ultimately win, and bad guys that you don’t love to hate, but just bad, evil, disgusting people.

That’s one of the things the KBS Drama Specials do very well. They don’t always give us happy endings, but they do give thought provoking and difficult stories that take a little bit of bravery to tell on Korean television.

Hon Kyung In does his very best to make Prosecutor Han Suk Hyun as vile as he can be. And Chae Jung Ahn effortlessly portrays the pain of a helpless battered wife. But 2PM’s Hwang Chansung adds his name to the list of promising idol-actors with a strong and affecting performance that keeps you engrossed to the very end.

Chansung of course is no stranger to acting having been part of the hugely popular original season of the High Kick series before debuting in 2PM. And even with a Japanese action drama and Level 7 Civil Servant with Joo Won under his belt, Your Noir gives him the chance to show he can take his acting to the next level. 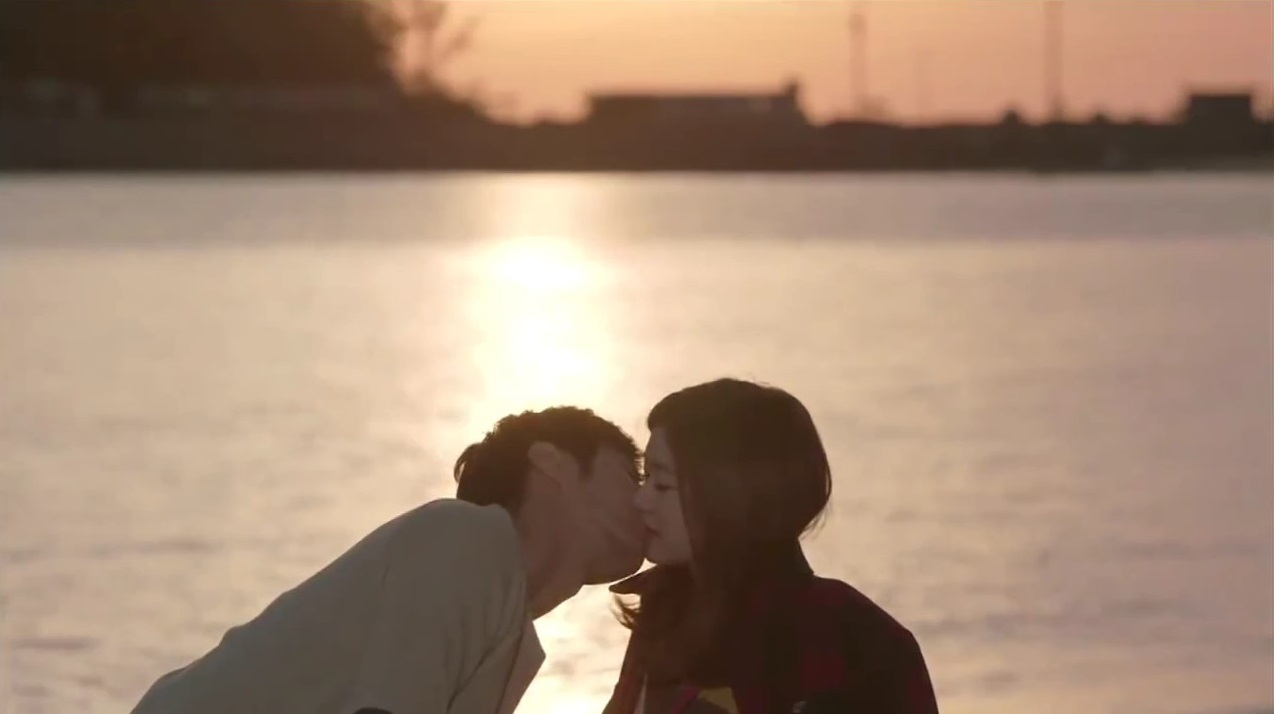 Meanwhile, in Came To Me and Became a Star, we meet Ha Jin, a young woman working at a struggling toy company. Not being able to pay for her comfortable apartment, she ends up having to take a closet-sized room at a youth hostel. It is in this hostel that Kang Suk also lives. Despite working as a math teacher, he is saddled with a mountain of student loans and having to pay for his comatose mother’s hospital bills.

They begin dating, not knowing they live in the same hostel. And they greatly enjoy their time together, especially since they get each other’s minds off of their financial troubles.

But when they find out the truth about each other’s situations, the harsh reality sets in. Will they be practical or will they follow their hearts? Kang Suk wants to follow his heart, but Ha Jin wants to be pragmatic and doesn’t think they will ever work out.

Kang Suk sells his car and uses the money to pay two years rent for a nice little apartment for Ha Jin. She can take it or not, but he says he needs to do this for her regardless. Ha Jin decides to go live with her parents in the countryside when the toy company goes bankrupt. But as she boards the bus, she remembers Kang Suk’s sincere feelings for her and she turns back and runs back to the hostel, not knowing it has just gone up in flames with multiple casualties.

Two years later, Ha Jin enters the apartment Kang Suk paid for her for the first (?) time. She finds a pair of shoes he had promised to buy her two years before. She puts them on and looks out her window up to the sky and sees a star shining down on her.

Yes, he died. We assume. After a sweetly developed love story and a heartbreaking separation, we learn that Kang Suk (likely) died in the fire and that maybe Ha Jin still has feelings for him.

Or maybe he’s still alive and they will reunite in the future? But then, what was that twinkling star?

It could certainly be open-ended, but we quickly assume that she runs back to the hostel, finds the fire trucks and news crews there and learns the man living in Room 303 is one of the fatalities. After two years, she finally finds the courage to move on and heads to the (clean!) apartment to find closure.

It is a sad, yet poignant ending to a story that tries to balance the cynicism of today’s world and just pure, sincere love. It is a thought provoking ending and one that is more than open to interpretation. But even on the surface, it is still a realistic, heartbreaking but meaningful conclusion.

Kim Ji Suk and Jung So Min gave strong performances conveying both the euphoria of a sweet romance and the harsh, cynical world that revolves around needing to pay the bills.

Both Your Noir and Came To Me and Became a Star look and feel like short films. And most if not all KBS Drama Specials usually do. Being able to present unique stories with an almost independent sensibility, beautiful cinematography and an opportunity for actors to stretch their acting chops, KBS Drama Specials always have something different and engrossing every week. And these two are excellent examples of that.

Came to Me and Became a StarKBS Drama SpecialReviewYour Noir

Commentary: The Thai Adaptation of “Cherry Magic” and Why There’s Room for All

Good Ol’ Review: “Kamen Rider Revice: Battle Familia” a Reminder of What Could’ve Been for the Main Series