“‘Tis Death’s Park, where he breeds life to feed him. Cries of pain are music for his banquet.” 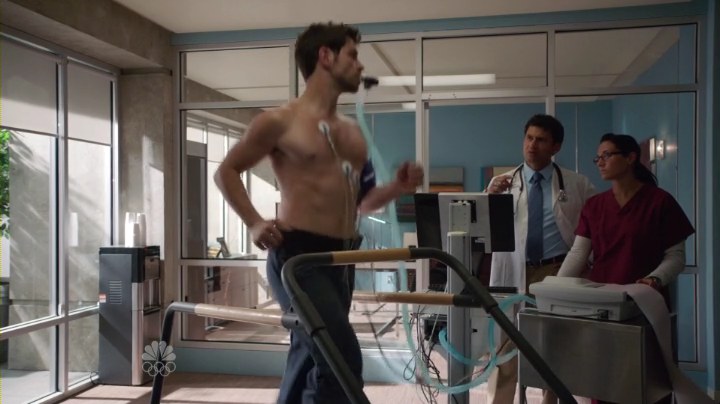 Nick’s getting some tests done and the doctor notices something peculiar. While Nick’s on the treadmill, no matter how fast he’s going or how steep the incline, his heart rate and blood pressure don’t move an inch.

Monroe and Rosalee are at a fancy restaurant for dinner. They say “I love you” to each other for the first time and think about moving in together. The chef sends a nice little beef and truffle tartlets, which Rosalee eats herself since Monroe’s been clean. Friends of Monroe’s, Sam and Kimber, stop by to say hi.

Meanwhile, a wesen runs through the forest and struggles with something in his stomach ready to burst. And after climbing up a tree, it does. Hank, Monroe and Wu head to the scene.

Renard’s confidant calls with an update. The cops are searching through Eric’s study while the Family is having a power struggle. No one suspects Misener. Renard says with Eric gone, Frau Pech will be looking to make a deal with someone else. (Too late.) He tells Confidant to make contact with her.

SEBASTIAN! (Thanks Adalind to giving Confidant a name.) Adalind asks if they are in danger and who will take Eric’s place. “The last Royal standing,” Sebastian replies.

Nick and Hank talk to the guy, Ned’s, wife. They had just celebrated their 5th anniversary two nights ago and went out for dinner.

Another body is found up a tree as Nick looks into the guy he killed during his zombie stupor. He talks to Renard about being bothered and Renard bluntly asks, Is Nick upset because he killed someone or is he upset that he killed someone who wasn’t wesen.

“Because God knows you’ve killed plenty of them. That’s what you Grimms do, isn’t it? When you have an answer, let me know.” 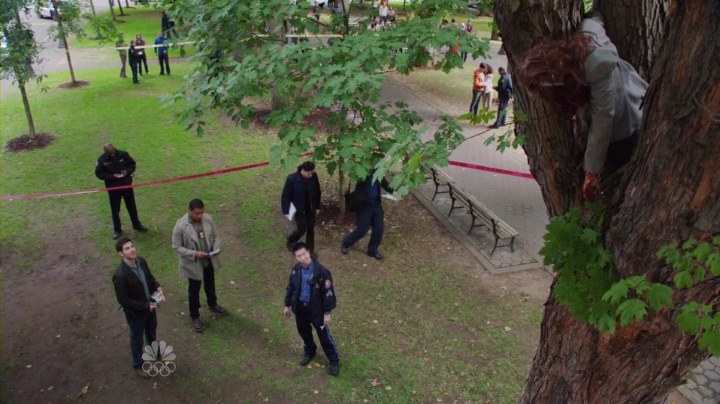 Nick, Hank and Wu head to the next scene of the new tree corpse. A woman this time. They look through her things in the car and see some receipts, including one for Raven & Rose. Wu loves that restaurant and raves about Chef Ostler.

They call Ned’s wife and asks where they went to dinner. Raven & Rose it is.

They head over before opening just in time to see Chef Ostler going Gordon Ramsey on his kitchen staff who all turn out to be bauerschwein, including Ostler himself.

The Chef calms down to cooperate, but they find nothing of importance. 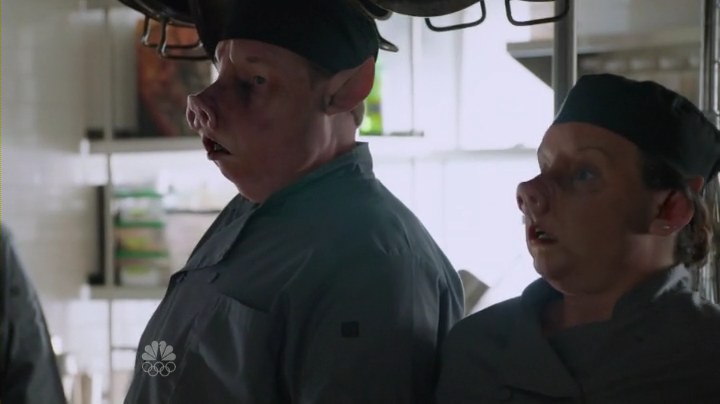 But it is Juliette that seems to have a lead. What happened to the victims sounds familiar to bloat, which she sees in the animals she takes care of and it is breed specific. Nick wonders if the victims were of the same breed then thinks about if they were blutbads since they and bauerschwein are mortal enemies.

Nick heads to Monroe’s to gather his stuff to move out. Nick mentions the restaurant and Monroe says he and Rosalee ate there the other day. And he feels fine.

But before Nick leaves, he gets a surprise. Juliette, Rosalee, Hank and Bud are there to celebrate Nick heading home. Bud’s wife made a beautiful cake.

Someone calls and it is Kimber who is looking for her husband Sam. Nick realizes what’s going on and asks if Sam was a blutbad. He was. Monroe also knows Ned, the first victim. He was hunting buddy of Monroe’s… and a blutbad.

They have Monroe write down Sam’s license plate and Rosalee recognizes Juliette’s description of how they died. They head to the shop and Rosalee finds info about the Black Despair Mushroom which is toxic to blutbad when cooked. It causes carpenter ants to climb into trees where their insides burst to spread the fungal spores.

Rosalee remembers they were given tartlets compliments of the chef, but thankfully Monroe didn’t eat them.

They get a call about Sam’s car being found and they hurry over to look for him. Nick, Monroe and Hank head into the park where they hear Sam growling and struggling up a tree.

But they are too late, his stomach explodes in front of them.

Either you take care of this of I will, he tells Nick, but Nick wants to go through the legal channels. 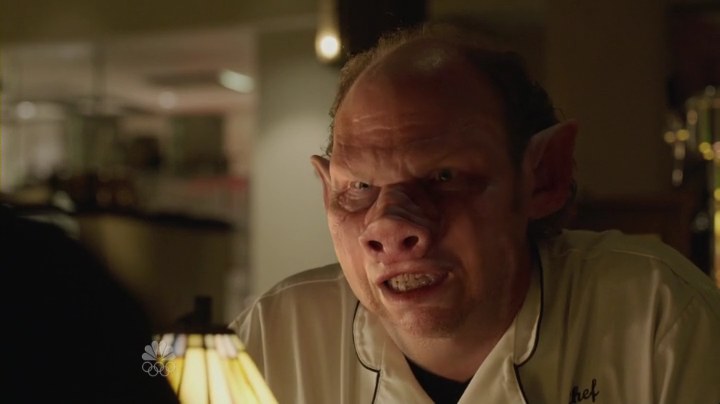 Nick goes back to the restaurant and talks to Chef Ostler. Ostler woges when Nick mentions the Black Despair Mushroom and realizes he’s in front of a Grimm. He thinks Nick is going to kill them all, otherwise how is Nick going to prove bauerschwein are killing blutbaden in court.

Back home, Nick tells Juliette he is considering killing the Chef to stop the killing here. That’s what his ancestors used to do.

Suddenly, Nick looks like he’s going to die again, but gets his color back. Juliette worries.

Monroe heads to the shop and vents to Rosalee who tries to calm him down. Nick comes and tells them about Chef Ostler’s full intent.

They can’t stop Monroe who storms out of the shop ready to end this.

Over in Austria, Sebastian breaks into Frau Pech’s home and calls Renard to says she’s nowhere to be found. But he has found a notebook with some info that he thinks is the buyer of Adalind’s baby. But instead, it leads him to Adalind’s hotel room as he secretly watches from around the corner.

Back in Portland, Chef Ostler leaves the restaurant to head home and Monroe follows with some friends he’s called up to join.

Monroe corners Ostler and is ready to pounce when Nick and Hank arrive. Nick tries to stop Monroe from attacking until Nick ends up shooting Monroe. He collapses. Ostler is very happy, but the other blutbaden start to howl and appear.

Nick says he can’t keep Ostler safe unless he confesses. Monroe wakes up to deliver an extra line as the blutbaden close in. Ostler pleads, but Hank says they gotta start thinking about themselves. 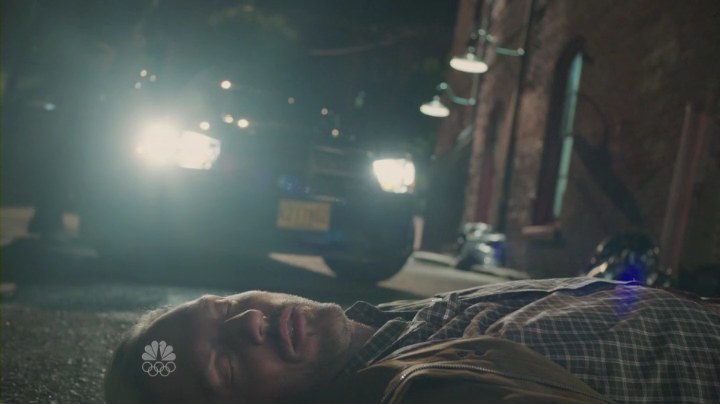 Ostler finally confesses and Nick and Hank take him to the station where he writes confession.

“And this little piggy went to jail.”

Episode Thoughts
Okay, that was kinda lame, I’m sorry to say. The episode was the usual Grimm slowburn, but this time the fire got doused with some exploding body parts instead of climaxing with something awesome.

As soon as Nick and Hank appeared in that back alley, it was pretty obvious it was a setup. And it wasn’t even a fun or exciting setup. And considering the build up of this big pig vs. wolf age-old fued, it ended with a big whimper. Of course they aren’t going to solve the Mid-East crisis in one episode. But even if the big feud pops up in the future, you could’ve skipped this episode and it wouldn’t matter.

It was a filler episode for sure, but it wasn’t a particularly enjoyable one. You can have fillers, but at least make them fun and exciting.

After two great episodes to start the season, this was definitely a big letdown. And a big downer too.

Miss the episode or want to watch it again?
Download full episodes of Grimm, Season 3 on

.
Also at Amazon, Grimm, Seasons One and Two on Blu-Ray and DVD.