Recap: The Amazing Race 23, Episode 4 – "Where the sun never sunsets."

All teams are on the same flight from Lisbon to Bodo, Norway via Oslo where they will then take a ferry to Slovaer in the Arctic Circle. 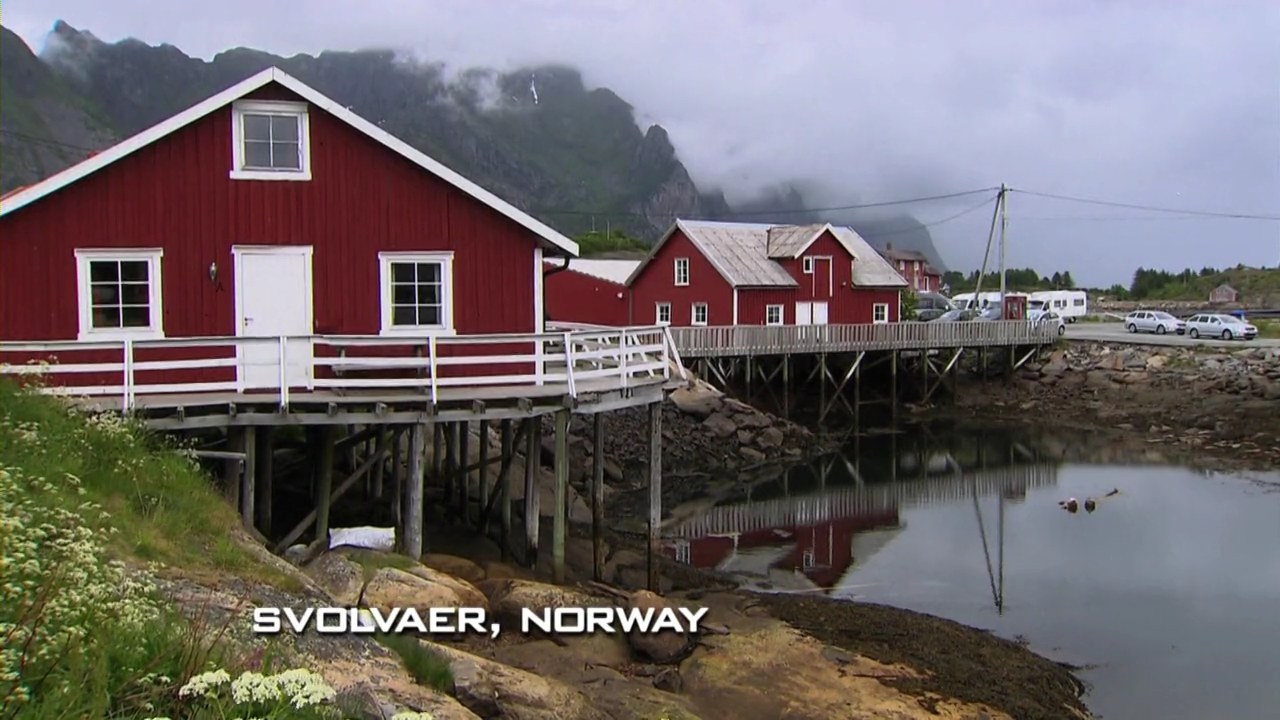 It is 11:05pm and the sun is still out when the teams get to their first clue on the dock, the Detour.

For this Detour, teams will get to work with Slovaer’s #1 moneymaker, fish.
In Hang Your Heads, teams must use a metal spike and twine to string together six bundles of 10 fish heads each which they will then transport with a wheelbarrow to drying racks where they’ll hang them the arctic sun.
In Hammer of the Cods, teams must retrieve 15 pairs of dried cod from the top of 30-foot high drying racks and take them downhill where they will pound them with a large hammer to make one kilo of fish jerky. 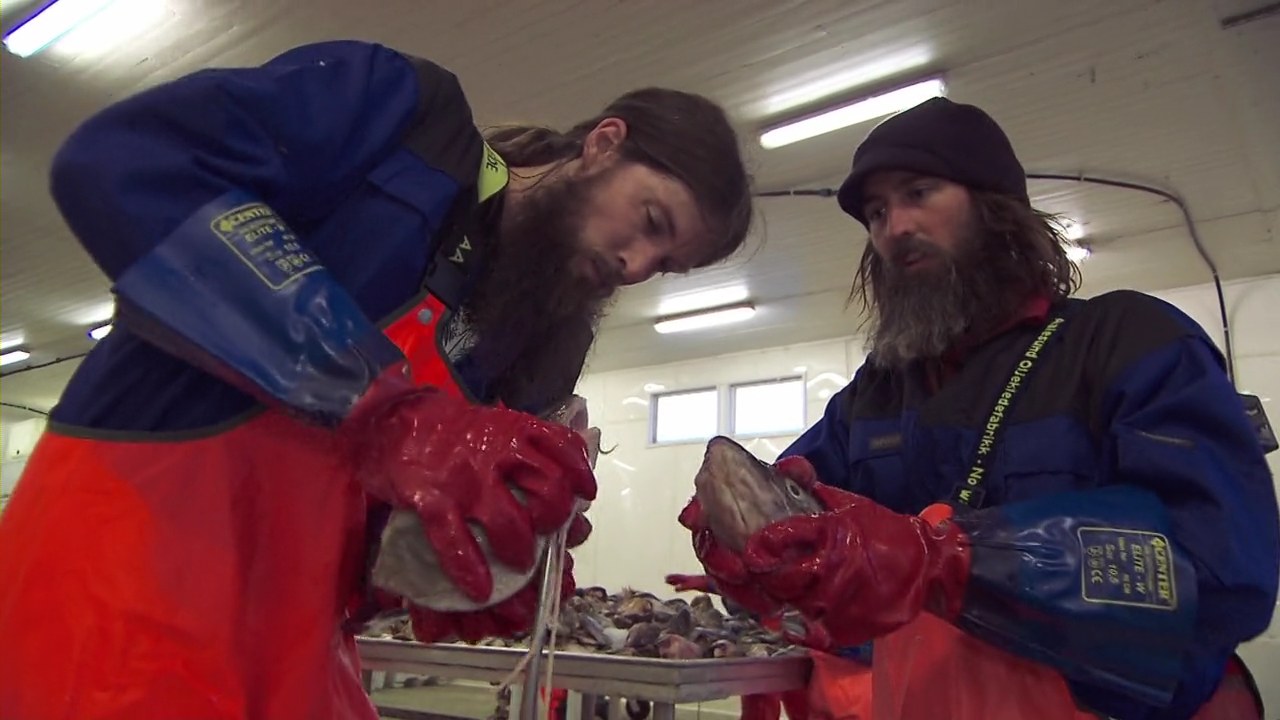 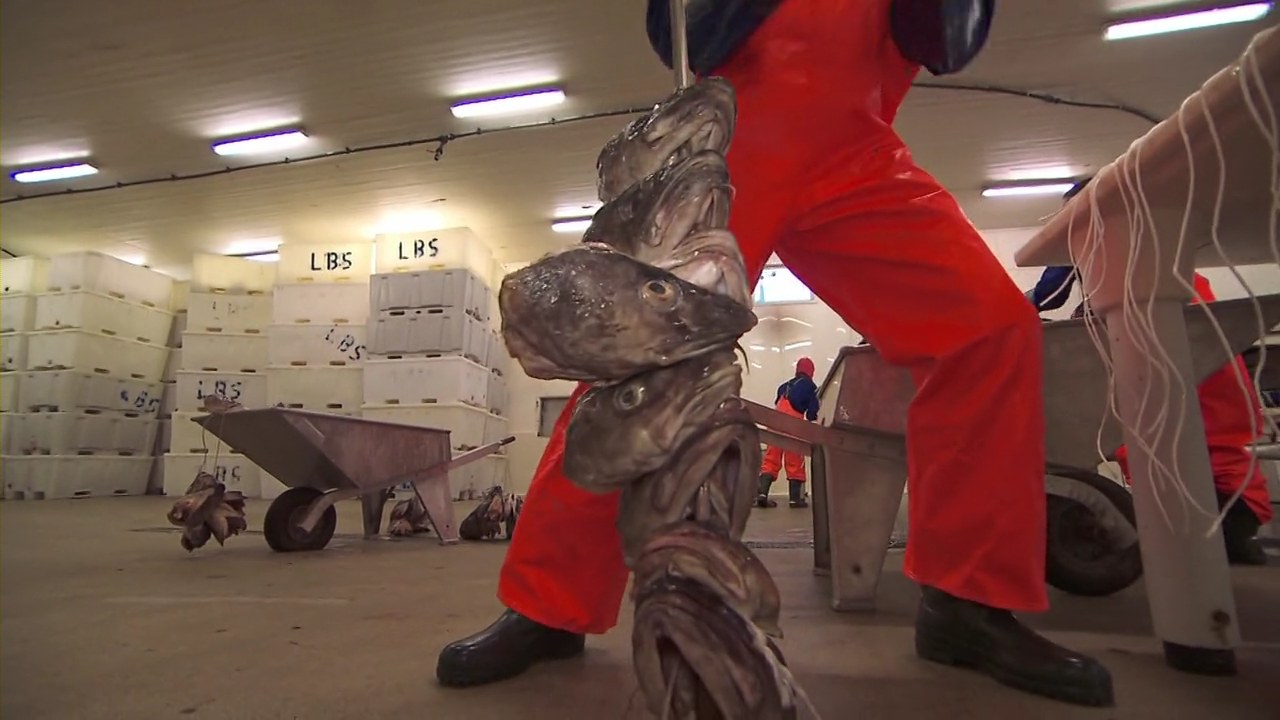 Teams ask the locals where John Berg Svinøya AS fish processor is located and find out it’s 2 kilometers over the bridge. While Tim & Marie manage to quickly find a taxi, the others aren’t. Brandon & Adam decide to go on foot.

Tim & Marie get to the fish factory, put on their gear and get started with Hang Your Heads. But Marie incorrectly tells Tim that they need only eight fish heads per bundle.

While Jason & Amy hop into their taxi, Leo & Jamal and Ally & Ashley decide to run it as well. Nicole & Travis, Tim & Danny and Nicky & Kim each wait for taxis.

Tim & Danny and Nicky & Kim decide to do Hammer of the Cods while everyone else gets to stringing heads. Jason & Amy give Tim & Marie the critical bit of info they were missing about the number of heads.

Tim & Marie are off to the drying racks first, but Jason & Amy are close behind. At the racks, Tim & Marie do not notice that there are poles marked with a Race flag. Jason & Amy do and get the next clue first. Brandon & Adam come find the correct pole and Tim & Marie ask what they’re doing differently than them. The Beards say they have no idea and happily run off. The Exes try to figure out what’s wrong with their bundles.

Leo & Jamal’s wheelbarrow has a flat tire and their wifeys Ally & Ashley, who were last at the warehouse catch up and pass them up the hill.

Down the hill, Jason & Amy tell Nicole & Travis about the marked poles and when they arrive at the drying racks, Marie finally notices the Race flag on the end of the pole and both teams get their next clue.

As Ally & Ashley and Leo & Jamal finish the Detour, Tim & Danny and Nicky & Kim are trailing. 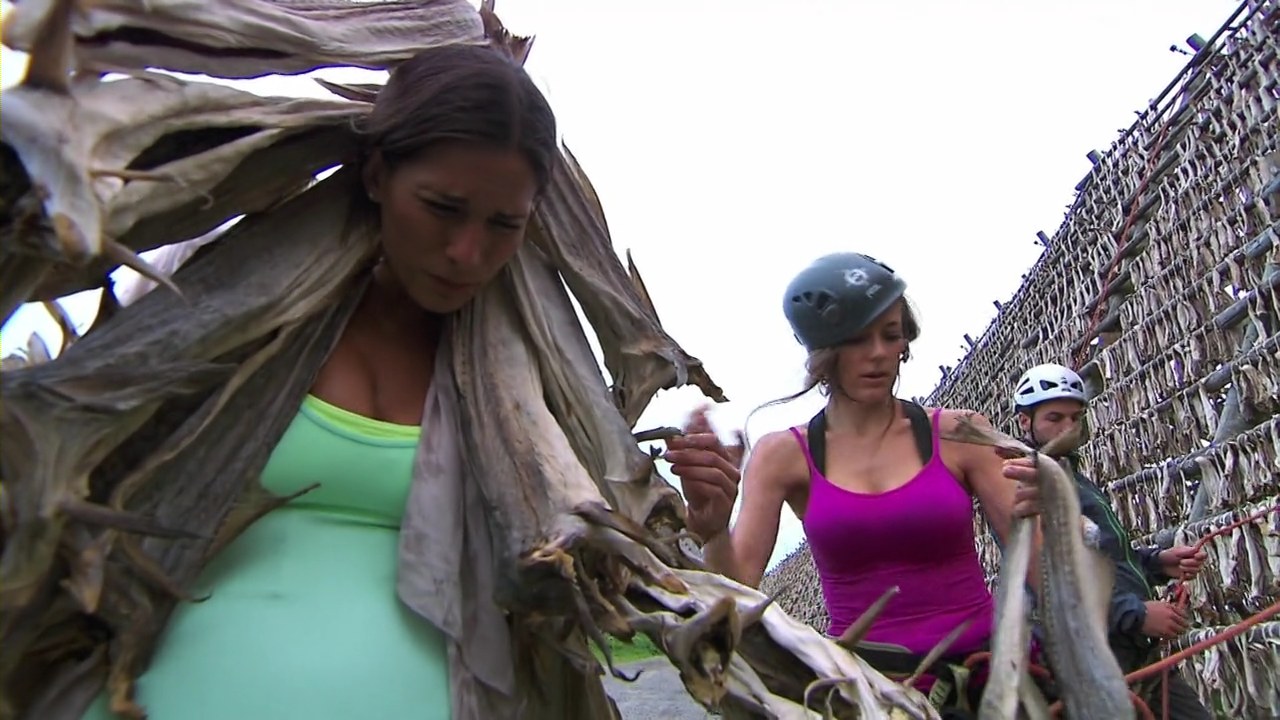 Teams must now take a high speed boat ride to Henningsvaer. Brandon & Adam arrive first and find the next clue on the pier, the Road Block.

In this Road Block, teams must jump off the Henningsvaer Bridge and swing on the end of an 80 foot rope. When they’re ready, they will unclip themselves and splash down in the Arctic Ocean to swim to a buoy with their next clue. 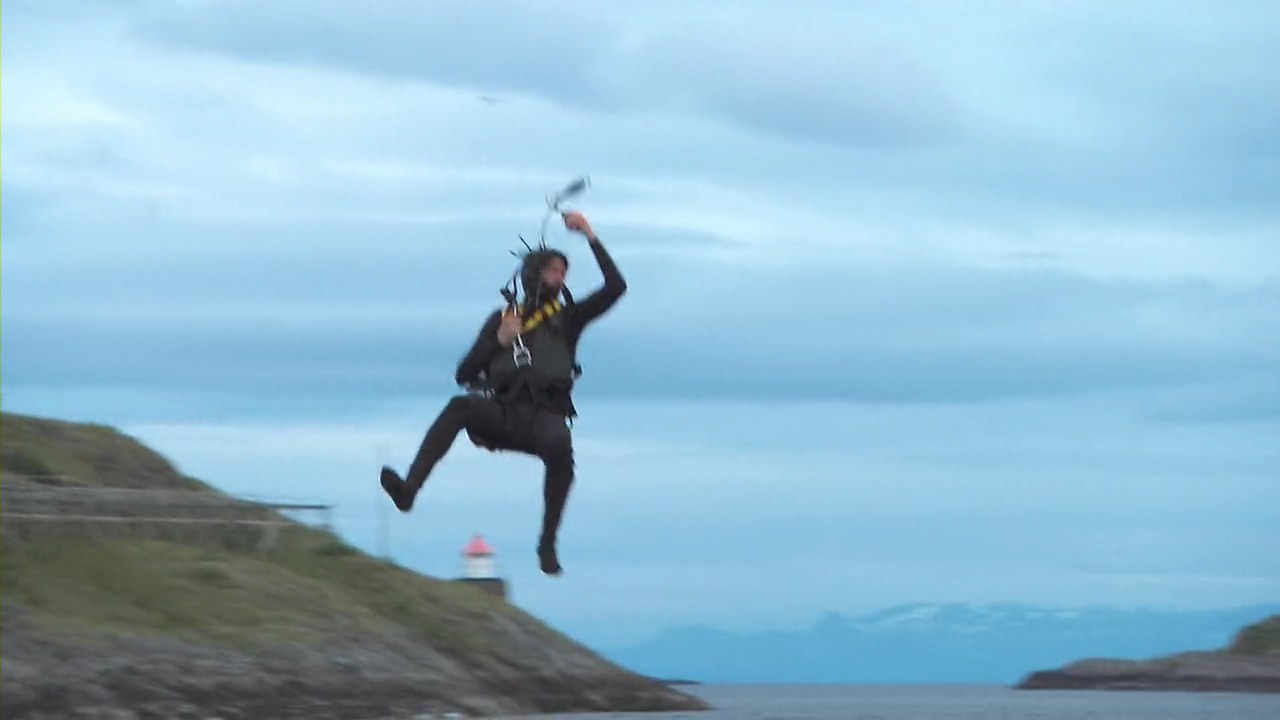 Brandon jumps off the bridge first and Jason is next, but has trouble reaching the ball that’ll release him from the rope. Tim and Nicole are close behind.

It is 1:56am and Brandon & Adam maintain their lead as they head back to shore. Teams must now choose a Ford Ranger which they will use to pull a sled carrying a large boulder to reveal a pouch containing their next clue and Viking coins which they will need later in the Race. 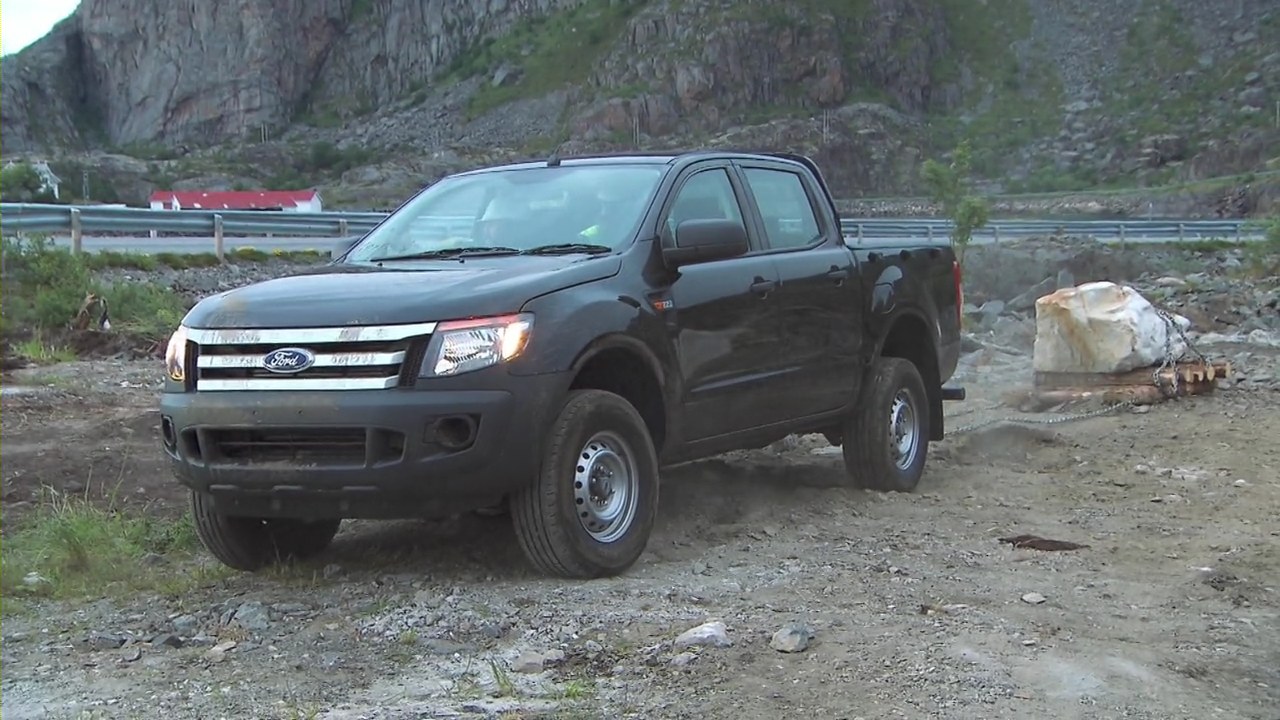 Brandon & Adam get the pouch with a picture of the Pit Stop on a piece of cloth, the Viking Longhouse.

Jason & Amy and Nicole & Travis grab their clues in the ground, but for some reason, Tim & Marie take the pouch with coins, but leave their little piece of cloth with the Pit Stop location. They think the coins are the next clue and drive off. 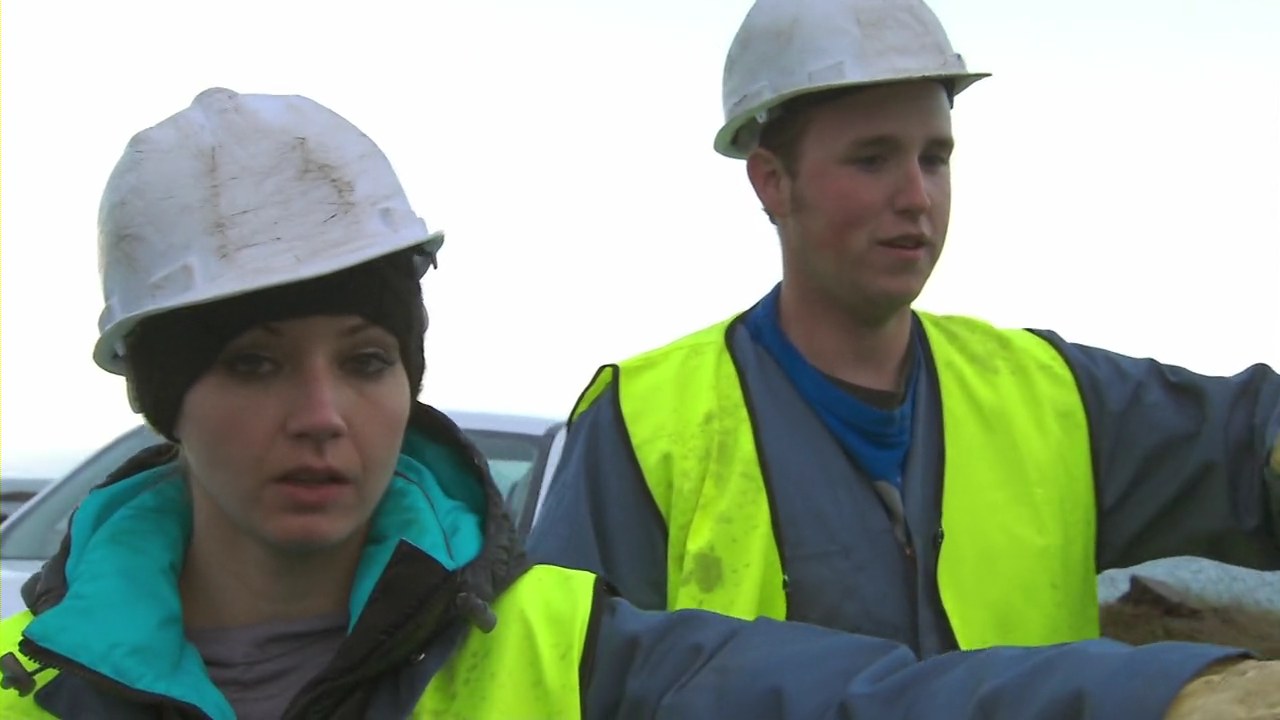 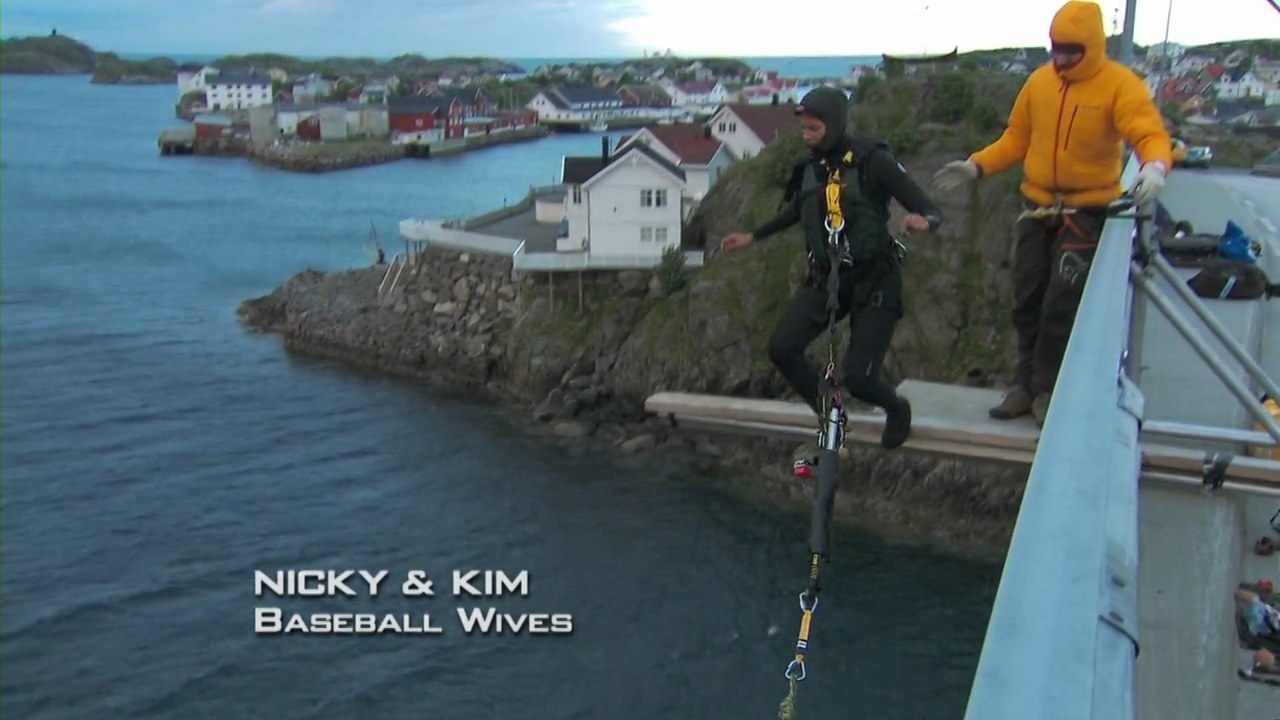 Ally & Ashley have trouble driving stick and instead of asking their husbands the Afghanimals for help, they ask Tim & Danny who have just arrived. They help drive their trucks in the right direction.

Brandon & Adam arrive at the Viking Longhouse where they are welcomed by a party of “Vikings” and Phil who officially checks them in as Team #1. They win $5000 each, but Phil has more news for them. They will continue Racing. He hands them the next clue and they’re off.

Meanwhile, Tim & Marie are clueless and they run into Nicole & Travis. Marie asks for help and Nicole immediately thinks to ask for the Express Pass in return for information. Marie hesitates and Nicole is ready to tell Travis to drive off… 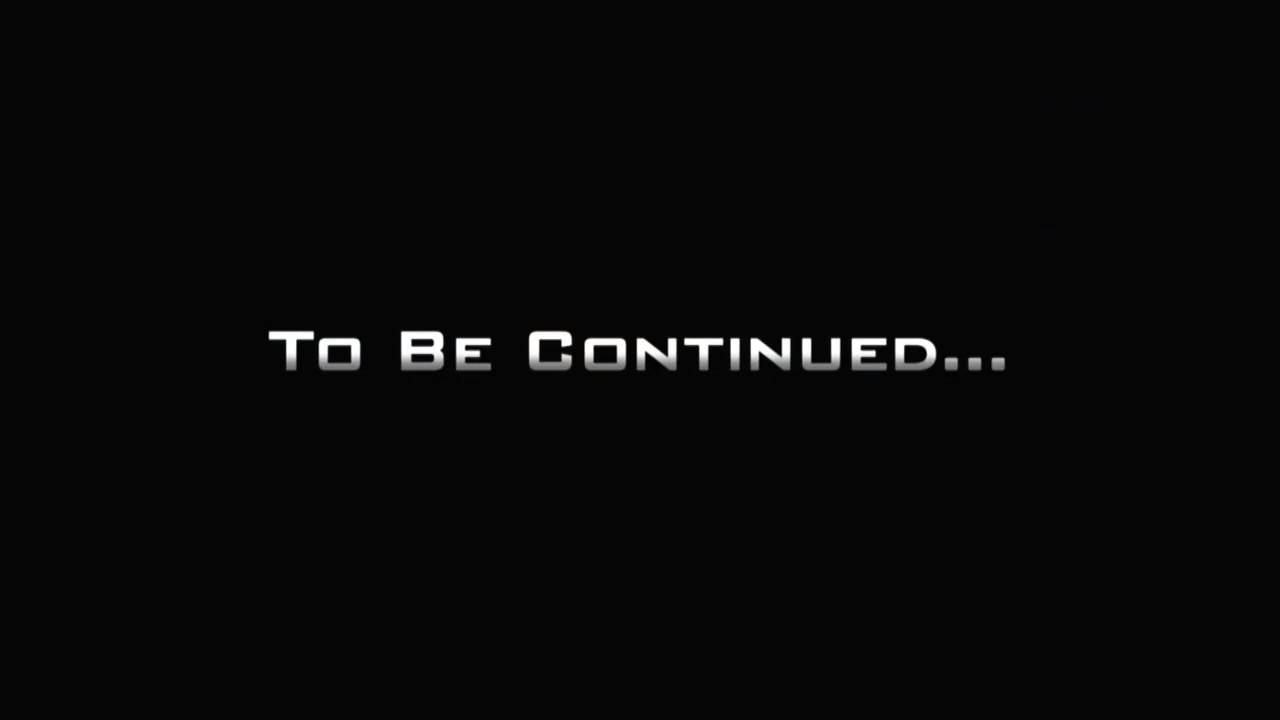 Episode Thoughts
Well, I seemed to be in the minority last week about not being a fan of it. I still think it was a very dull episode and even worse Leg.

This week’s episode and Leg, however, is much better. First, it is great seeing teams competing side by side. Bunching used to be a bad thing on the Race, but these days, with such simple, linear Legs, they are a welcome part of a Leg as we get to see the teams hustling and being pushed to really go hard and compete when they see other teams next to them.

I’ve always been a fan of night Legs. Seeing teams running around in the dark is great fun. But it is also fun to see teams running night Legs with the sun still out as well. I don’t even remember the last Leg in the Arctic Circle (if ever?), but it was great and even more awesome since this was Zero-Hour Pit Stop. Teams continue Racing into the wee-hours of the morning and I hope they do and not go to a train or bus ride they can sleep on.

About these Zero-Hour Pit Stops though. They are interesting because they seem to be different from a TBC/double/super Leg. What’s odd is that the Zero-Hour Pit Stop acts like a TBC/double Leg, but not as a non-elimination Leg since the last place team won’t get a Speed Bump on the next Leg. They actually get no penalty. But the Legs are considered separate since the winners of this Leg get a prize.

It’s pretty confusing and I’m starting to confuse myself, but basically, it’s a way to have a non-elimination Leg without needing to set-up a Speed Bump. And if it is a budgetary concern, then I’d rather they just go back to the original superleg format where the first place team doesn’t get a prize (more savings!) and Phil at the Mat is merely a Route Marker and they actually are still running the same Leg.

Does that make sense? Does the distinction even matter? I dunno. It just seems unfair some saved teams get a Speed Bump and the others get a free pass.

Anyway, back to this Leg overall. The Road Block was simple enough, but perfectly placed after that surprisingly grueling Detour. Surprisingly for two reasons. One, the hike up and down the hill was not described by Phil in his Detour spiel. And two, because as we all know, TAR likes to stay away from difficult and demanding tasks in recent seasons. (Hee…)

Thinking about dried fish, I’d love to see a dried fish task when they return to the Philippines. Maybe selling them or something. Would definitely be fun.

But overall, a very solid Leg and exciting episode. See, TARUS has plenty of amazing-ness to deliver when they actually try.

(And I needed a good episode after all the All-Stars hullabaloo this past week. Oy vey!)

Oh, and kudos to the always fun TAR editors who chose to use “Fish Heads” over the closing credits. Hilarious!

The Teams
in subjective order

After their big blunder in the first Leg, I am liking Nicole & Travis a lot more. They’re my #1 team for this week mainly for their little power play at the end of the episode. While I think they lost that Express Pass fair and square (Read your clue!), I think it was a clever move to demand it in return for critical info. This is the Pit Stop and I’m sure Nicole & Travis could care less if Tim & Marie are able to check-in or not. Awesome gameplay. Nicole’s look to the camera… priceless! They better keep up this competitiveness.

I like Jason & Amy well enough. They’re they nice guys, nice couple, strong, good Racers. But they’re not necessarily the most exciting to watch. I like ’em, but I wish they’d give us more personality. I also like Tim & Danny who are also nice guys. But I can see a nice competitive spirit in them too. They seemed pretty down in their confessionals though (an unfortunate spoiler for next week?). But they are much more likeable country boys from middle America than a certain pair of Cowboys I hope never Race on TAR again.

Brandon & Adam are moving up as well. They have a similar under the radar ascent like similar long-haired team James & Abba. An excellent Leg for them. Tim & Marie have moved up my list. They are still the dysfunctional couple, but they’ve come off less forced these last two Legs. They don’t feel like they’re playing to the camera as much and instead are just naturally Mr. and Mrs. Bickerson. Which I much prefer.

Ally & Ashley did not have a particularly good Leg. I am happy they weren’t as glued to Leo & Jamal this Leg, but I could’ve done without their ditzy confessionals. They were Racing pretty well until this Leg. Nicky & Kim meanwhile deserve kudos for getting through that Detour. It might’ve been the wrong decision, but they pushed through it and didn’t really give up at any point this Leg. Last week’s tunnelvision at the Detour, not seeing the guy right next to them and this week not feeling the notebook in her mouth was amusing. I’d definitely want to see more of that fun and competitiveness as te Race goes on.

And finally Leo & Jamal. They too have toned down the playing up to the camera, but they needed to because they were falling behind this Leg. When they actually have to focus on the Race instead of mugging the camera, they are a much more bearable team to watch. Still, the must be a reason everyone dislikes them. Ass-ghanimals? Rowan & Shane and Chester & Ephraim also had less than favorable stories about their interactions with them. So…

One thought on “Recap: The Amazing Race 23, Episode 4 – "Where the sun never sunsets."”