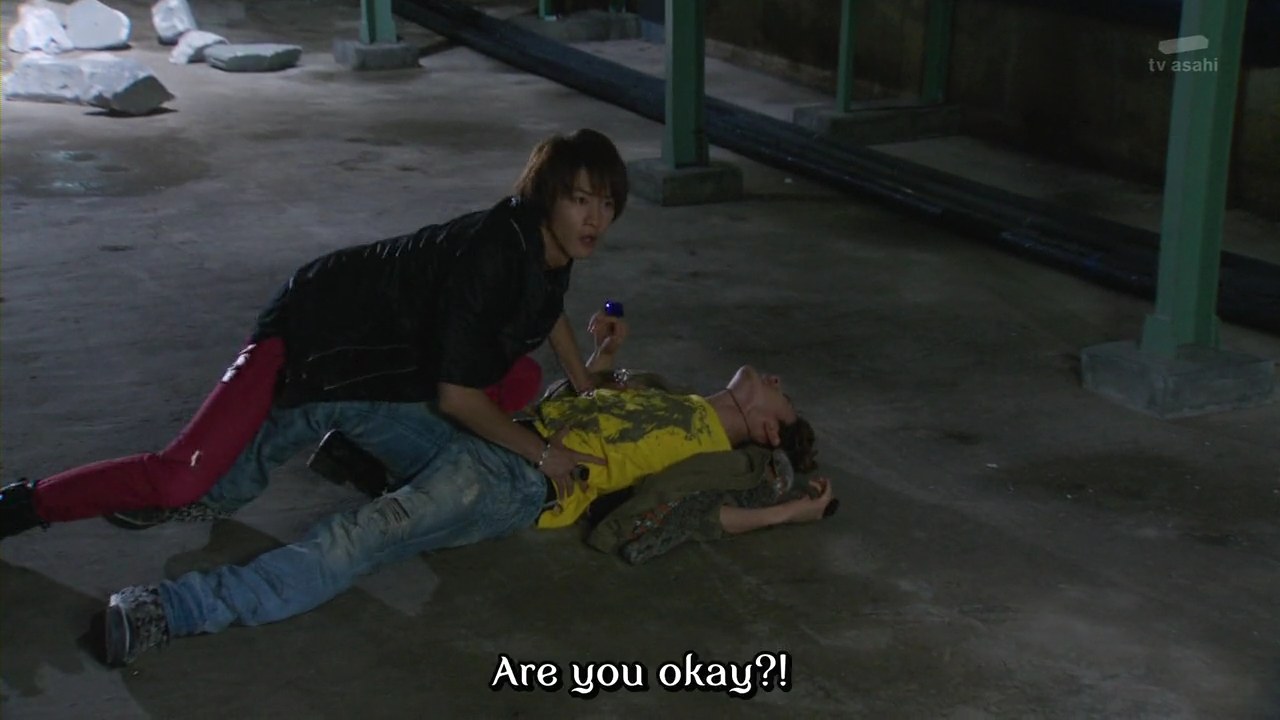 Picking up right where we left off last time, while everyone is still reeling from the revelation of Wiseman’s identity, White Wizard takes Masahiro and teleports. 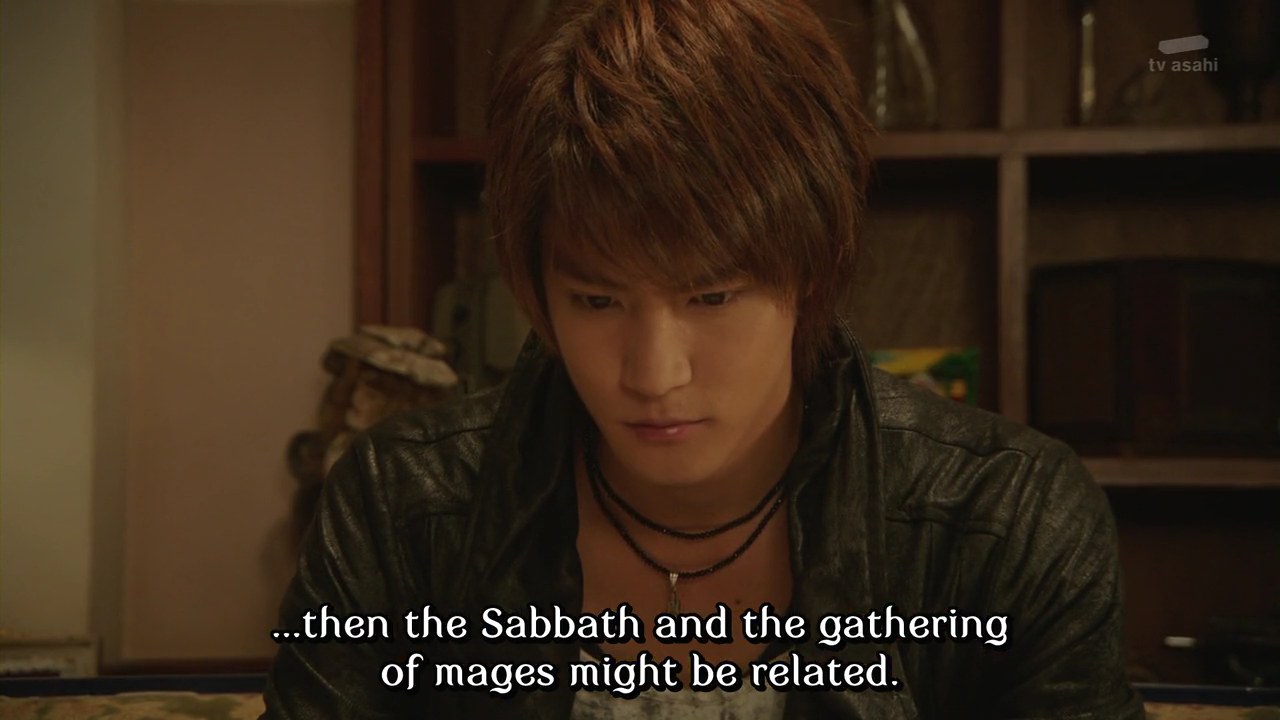 Everyone’s back at the shop. Rinko lets them know that Masahiro’s wife Aya has calmed down and under Department Zero protection.

They wonder about Fueki. Shunpei thinks maybe if Fueki is a Phantom, he’s kept his humanity like Sora/Gremlin. Wajima suggests that maybe the Sabbath and the gathering of Mages are related.

Shunpei and Haruto are on the roof when the Familiars arrive with, unfortunately, nothing to report about on Koyomi’s whereabouts. Haruto asks them if they could keep going and Shunpei mentions they’ve been searching for five days.

Haruto snaps at Shunpei who is trying to stay positive.

Meanwhile, Koyomi is still down in the magical dimension, but she is quickly losing magical energy. White Wizard arrives with a new Mage who gives Koyomi a refill, but White Wizard worries the dimension is draining Koyomi too fast. 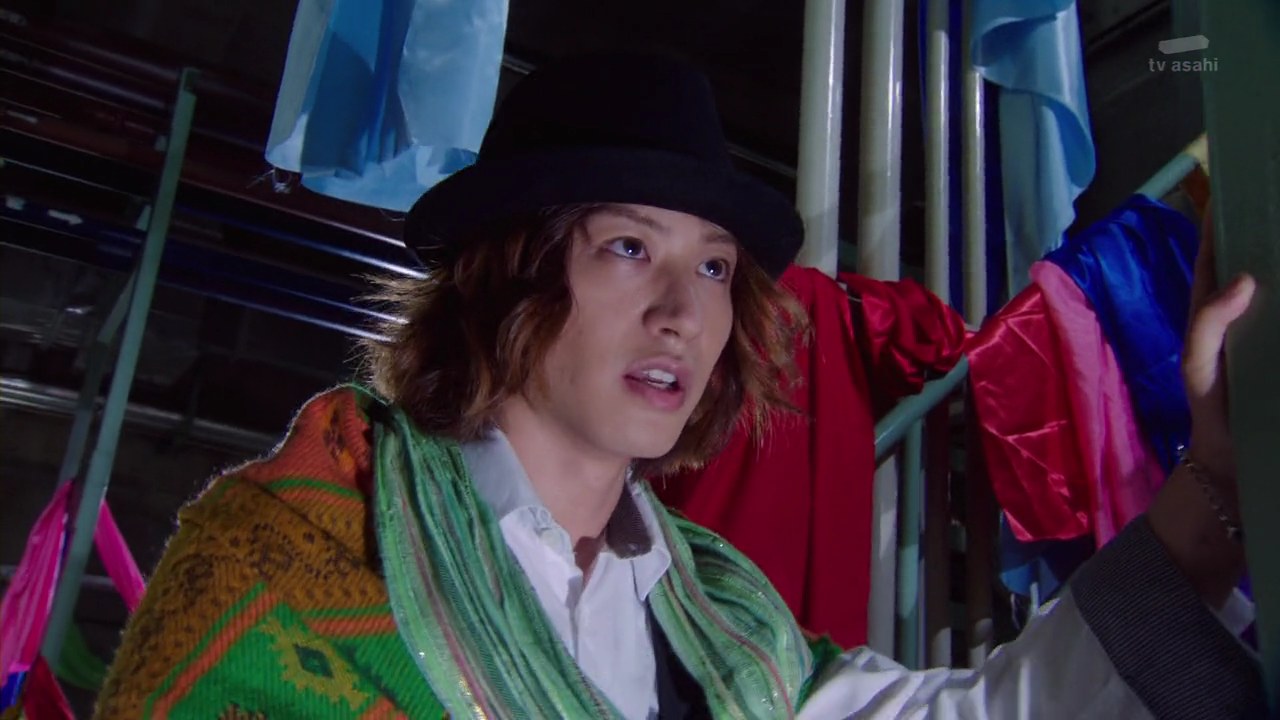 Across town, Sora is looking for White Wizard/Wiseman so he can start the next phase of his plan.

By the river, Kosuke tries to comfort a confused Mayu who tries to make sense of White Wizard’s intentions. Suddenly, Ghouls pop up and while Kosuke manages to henshin, a hesitant Mayu is grabbed from behind by Sora. An already henshined Haruto arrives and gets Sora away from Mayu.

Oh well, Sora says as he retreats. Haruto and Kosuke take care of the Ghouls.

Shunpei asks Mayu why she didn’t henshin and Kosuke supposes it’s because she doesn’t want to be a mage anymore. Shunpei notices Haruto looking towards where Sora ran off. He tells Kosuke to take care of Mayu while he hurries away. 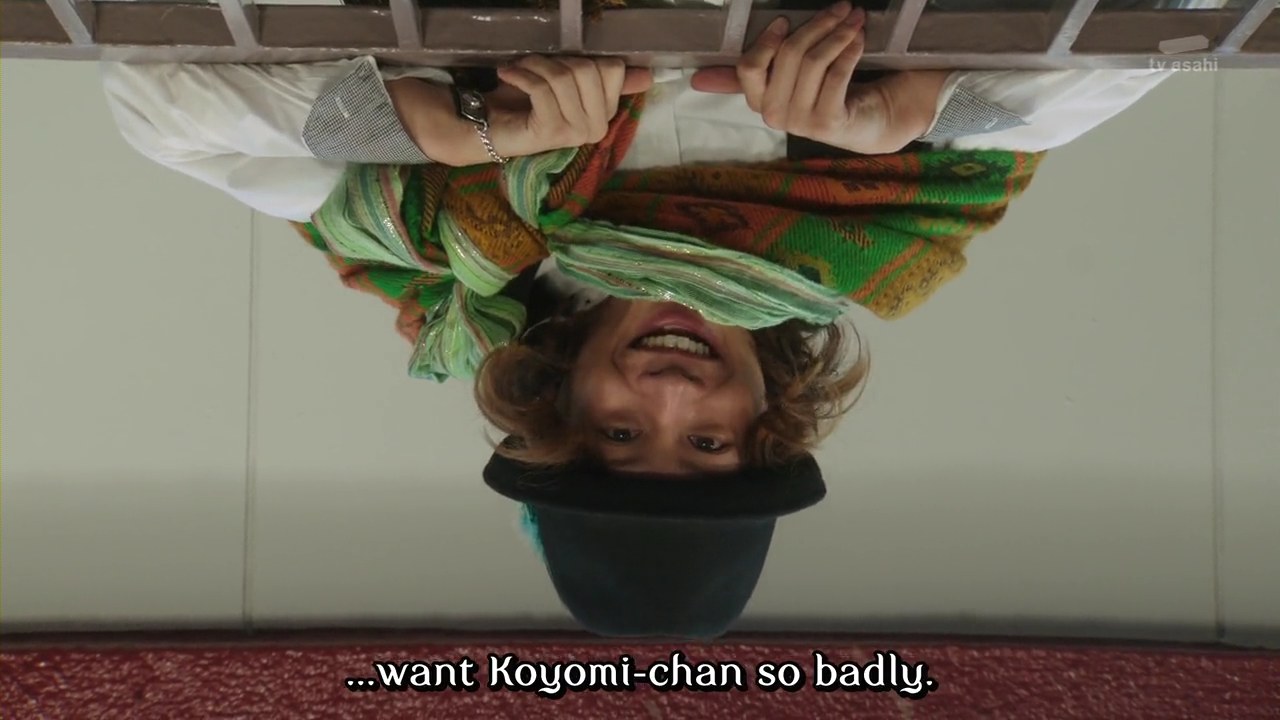 He goes to Sora’s old apartment where indeed Sora is waiting. They both want the same thing. Sora suggests Haruto becomes his hostage because surely Wiseman would show up if Sora had a mage in his hands.

Rinko shows up, having followed Haruto, but this is Sora’s cue to leave. Thanks anyway for relying on me, he says and flies away. 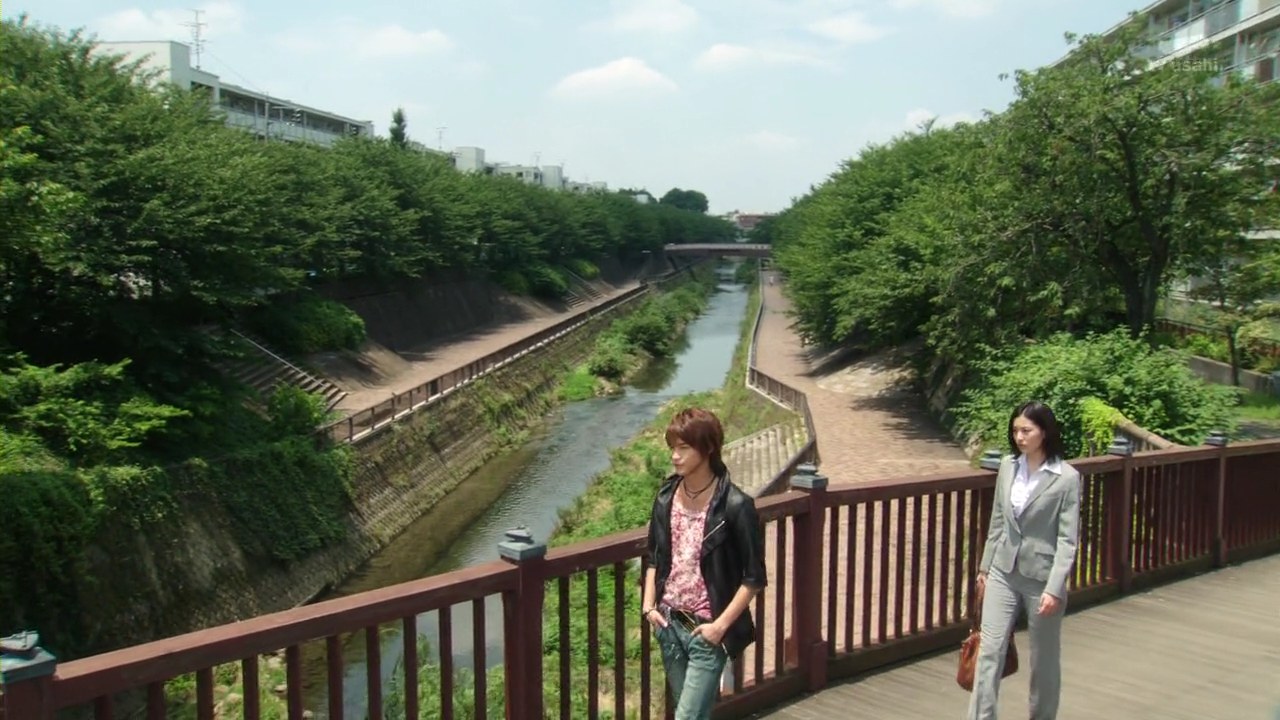 Rinko asks Haruto what he was doing with Sora. He says he wanted to ask for help since he feels so helpless right now. Rinko gets a phone call and tells Haruto that there’s still hope.

Meanwhile, Koyomi wakes up in a very nice mansion. She gets up out of bed and explores the house.

Rinko and Haruto head to the hospital where Kizaki has finally awaken and he proceeds to tell them what he had found out about Fueki. It is because of what he knew that he was attacked.

While Koyomi finds a picture of her and Fueki on the table as well as a diary, Kizaki explains Fueki was a famous physicist and was an expert in medicine and science. He had a wife who died as well as a daughter.

Koyomi reads that she is Fueki’s daughter and that she had an incurable disease. So incurable that she actually died. Yes, DIED!

Losing his hope in life, Fueki fell into despair.

Shocked, Koyomi drops the diary and steps back only to fall to the floor. Distraught, confused about who or what she is. Fueki comes walking downstairs. 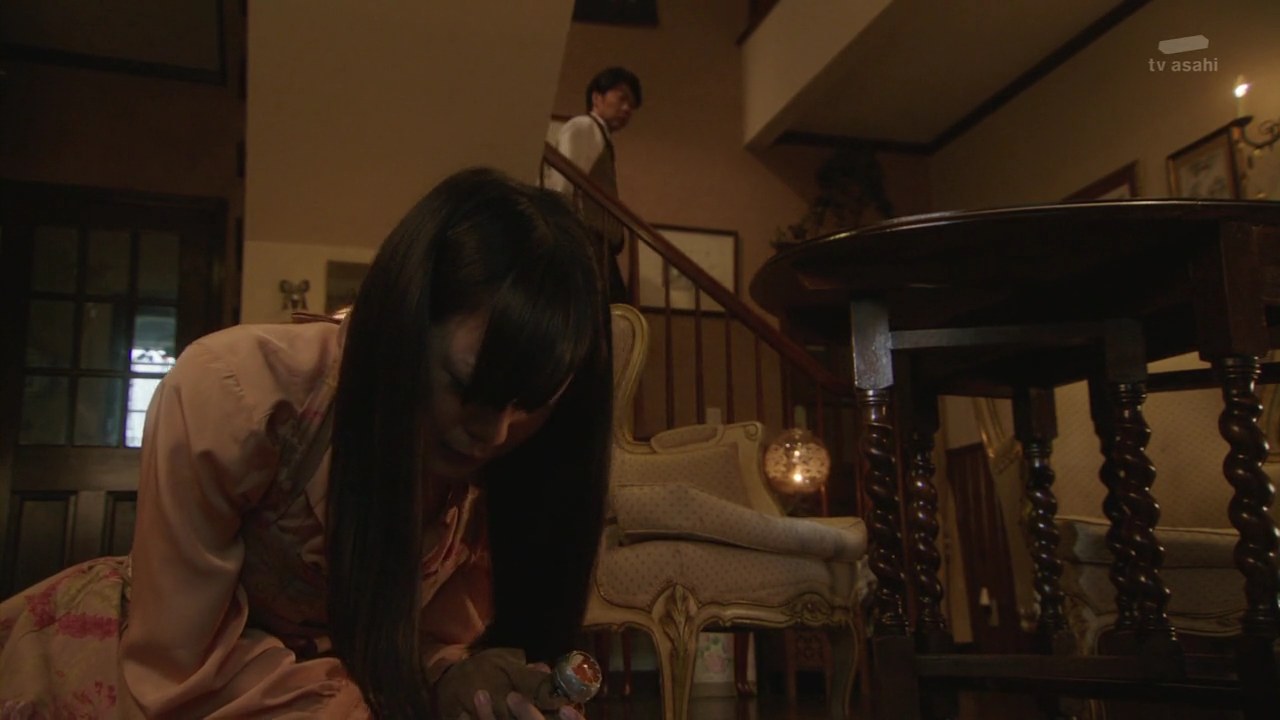 At the hospital, Rinko too wonders what Koyomi really is. Kizaki hands Rinko Fueki’s address. Haruto takes it, thanks Kizaki and hurries over. Rinko offers to go with him, but Haruto wants to have a private conversation with Fueki.

Walking along, Shunpei, Kosuke and Mayu run into Yuzuru. But it is definitely not the kind kid they once knew. He pushes Kosuke aside and walks over to Mayu, saying he’s come for her.

Yuzuru pulls a ring from his belt and henshins. He chains Mayu while Kosuke henshins too, but Yuzuru manages to easily take care of Kosuke before teleporting Mayu away. 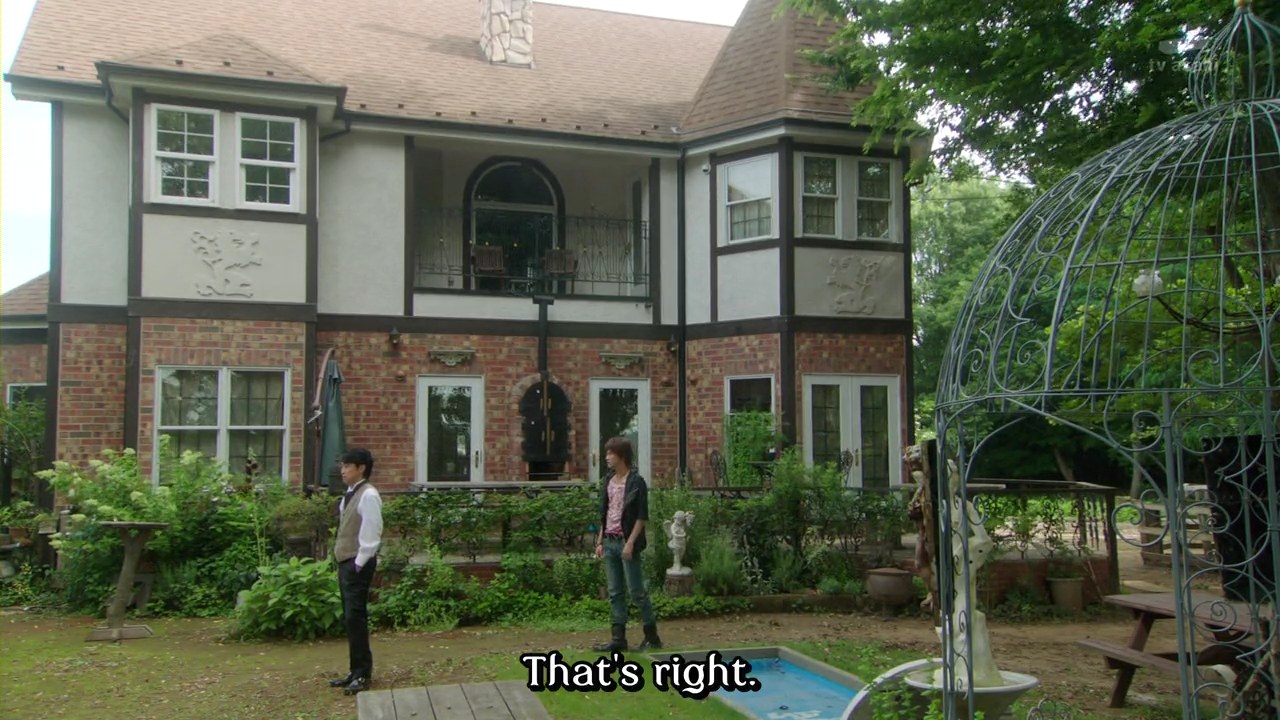 Haruto arrives at Fueki’s home. Before he can walk in, Fueki meets him outside and they head around back.

You’re the Phantom born from Koyomi’s father, aren’t you? Haruto asks.
Fueki says no, he is human. And this Phantom standing before him is artificial, one he created.

While mages need a Phantom within them, Fueki used technology to create this one to put into his own body. He combined magic and technology to do so.

Maintaining the Philosopher’s Stone requires magical energy, which is exactly what Haruto supplied. That’s why Fueki wanted to find more mages, to provide Koyomi with the energy she needed. 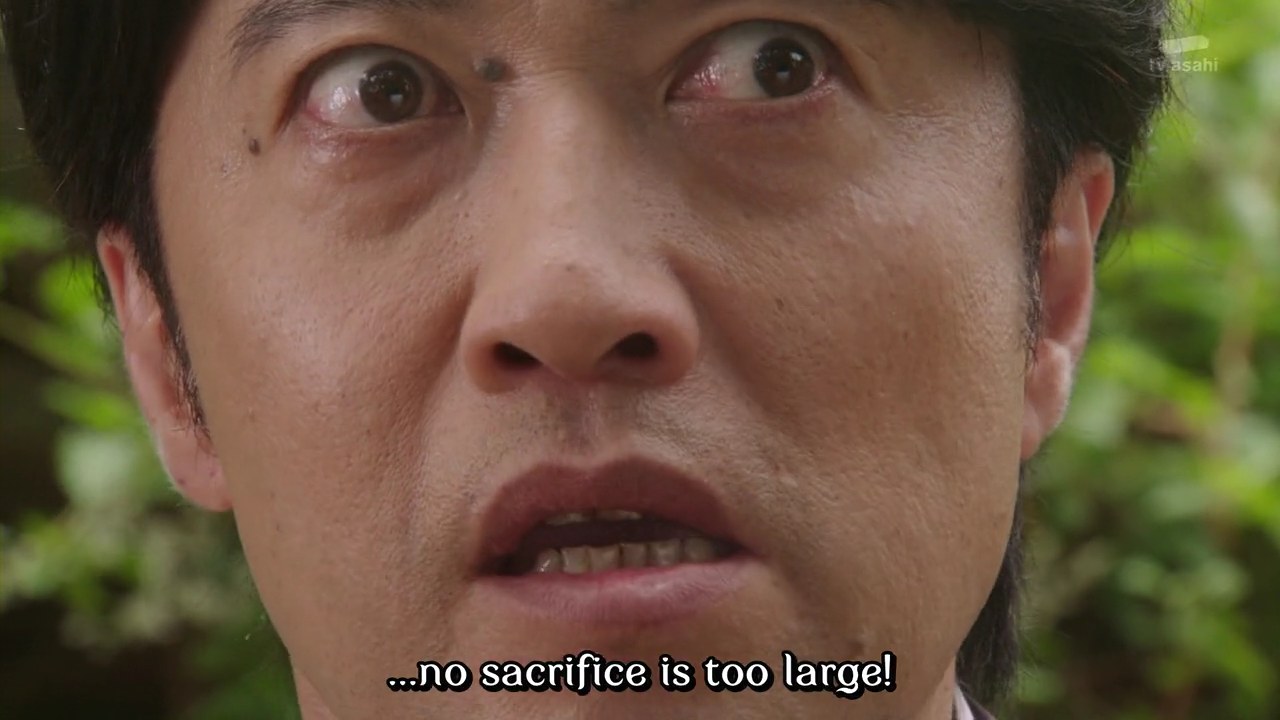 Do you know the pain you’ve caused?
It’s nothing compared to the pain of losing my daughter!

No sacrifice is too large, Fueki says, when it comes to resurrecting his daughter.
If Haruto doesn’t cooperate, then Koyomi will die.

Fueki introduces Masahiro, the fourth mage who shows up and henshins.

Episode Thoughts
Definitely a big episode. We pretty much learn what this entire season has meant!

Koyomi is basically a corpse, or a puppet as they prefer to describe her, merely running on magical energy AND the Philosopher’s Stone which apparently has the power to turn someone human. (Like the Corona Aurora on Operation Overdrive!?!?!) Which is why Sora wants it so much.

And of course, this whole roundabout way of creating Phantoms, finding Gates and looking for mages is all so Fueki can hopefully resurrect his dead daughter.

Pretty insane stuff if you think about it. While all the revelations have been solid and good, I am looking forward to seeing everyone else’s reactions to the news.

We saw a little of Haruto’s shock, but I hope we get to see Shunpei, Rinko, Wajima and Kosuke’s reactions too. When the bigger picture wasn’t front and center this season, it was their friendship and the fun they had together that we enjoyed. So I definitely hope we get to see how they’ve all grown close this past season in the last three (regular!) episodes.

Recap: Kamen Rider Saber, Chapter 29: At That Moment, the Swordsman Made His Move.