Revenge is always an interesting and solid theme to build a drama series around, especially if done well. Most recently, it was the Song Joong Ki-Moon Chae Won series Nice Guy. But in 2005 and 2007 it was Resurrection and The Devil, respectively, that hooked audiences.

Now, KBS’s Shark (international title: Don’t Look Back: The Legend of Orpheus) hopes to follow in those footsteps as the third and final drama of the “revenge trilogy” from screenwriter Kim Ji Woo and director Park Chan Hong.

And after its first six episodes, it appears Shark is well on its way.

Shark tells the story of Han Yi Soo (Kim Nam Gil) as he works an intricate game of revenge against the people who tore his family apart. The two on his hit list are respected professor and scholar Jo Sang Deuk (veteran Lee Jung Gil) and his son, hotel CEO Jo Eui Sun (Kim Kyu Chul).

Though the country loves and respects patriarch Jo Sang Deuk, he’s got major and possibly deadly and treasonous skeletons in his closet. It is also not beneath him to work under the table with the local authorities to get his son out of trouble, usually as a result of his philandering, womanizing and drunk ways. That includes persuading his personal driver, Yi Soo’s father, to take the fall for Eui Sun’s hit and run.

Meanwhile it is that same philandering, womanizing and drunkeness that also forced his wife to leave their manse as well as their only daughter, teenage Hae Woo (Kyung Soo Jin).

At the same time, that same daughter has grown closer to Yi Soo (Yun Joon Suk), son of said driver. But in a world where money equals power, it is Yi Soo’s family that loses. His father is murdered for possibly knowing all too much about grandfather’s past, while Yi Soo gets the target painted on him when he gains possession of evidence not only clearing his father, but completely erasing any reason for the respect and adoration for the elder scholar.

Yi Soo’s sister Yi Hyun (Ahn Seo Hyun then Nam Bo Ra) as well as Hae Woo are led to believe Yi Soo is also dead, twisted and spit out of a telephone booth after getting slammed into by a big rig.

Twelve years later, Yi Soo is alive and back in Seoul with a brand new identity and the backing of a rich Japanese businessman who seems to have his own beef with the Jos.

Hae Woo (Son Ye Jin) is now a prosecutor, emboldened by what happened to her friend she had hoped to become more than just. She’s also just married Oh Joon Young (Ha Suk Jin), a hotel CEO himself and son of Seoul’s chief prosecutor. Also, her and Yi Soo’s high school friend.

It is at their wedding that Yi Soo and Hae Woo first meet each other again after more than a decade, though Hae Woo doesn’t know that. And it is now that Yi Soo sets his plan in motion, initiating a game of cat and mouse with Hae Woo and detective Byun Bang Jin (Park Won Sang) (who had worked on his father’s case as well as ended up adopting Yi Hyun) in an effort to reveal the truth about what happened 12 years ago as well as topple the powerful network, empire and reputation the elder Jos have created.

And Yi Soo starts this with the help of his beautiful assistant Jang Young Hee (Lee Ha Nui).

That’s already pretty full of a setup right there for a good series. But maybe the most intriguing aspect of the story is the mystery that lies with every single one of the characters. Through six episodes, it appears Yi Soo and Hae Woo are the only ones that are anywhere near being open books. And even that is an uncertainty.

Trust no one. Whether it’s grandpa Sang Deuk’s dark past or Joon Young and Young Hee’s real feelings and intentions, there is a big cloud of mystery surrounding our characters adding to the already tense atmosphere.

Indeed, Shark contrasts that tension with an incredible cinematic visual style similar to another 2013 drama standout, That Winter the Wind Blows. Like That Winter, Shark‘s soft visual presentation enhances the heavier drama. Between the quieter moments of contemplation and the confrontations and revelations, that contrasting combination helps maintain the series’ suspenseful intrigue.

When it comes to casting, Shark‘s is uncannily likeable. And the fact that everyone is so likeable makes the mystery and secrecy behind each of their characters that much more unnerving. A cast of actors who all exude charisma and give heft to series, including Nam Bo Ra, Park Won Sang and White Christmas‘ Lee Soo Hyuk. 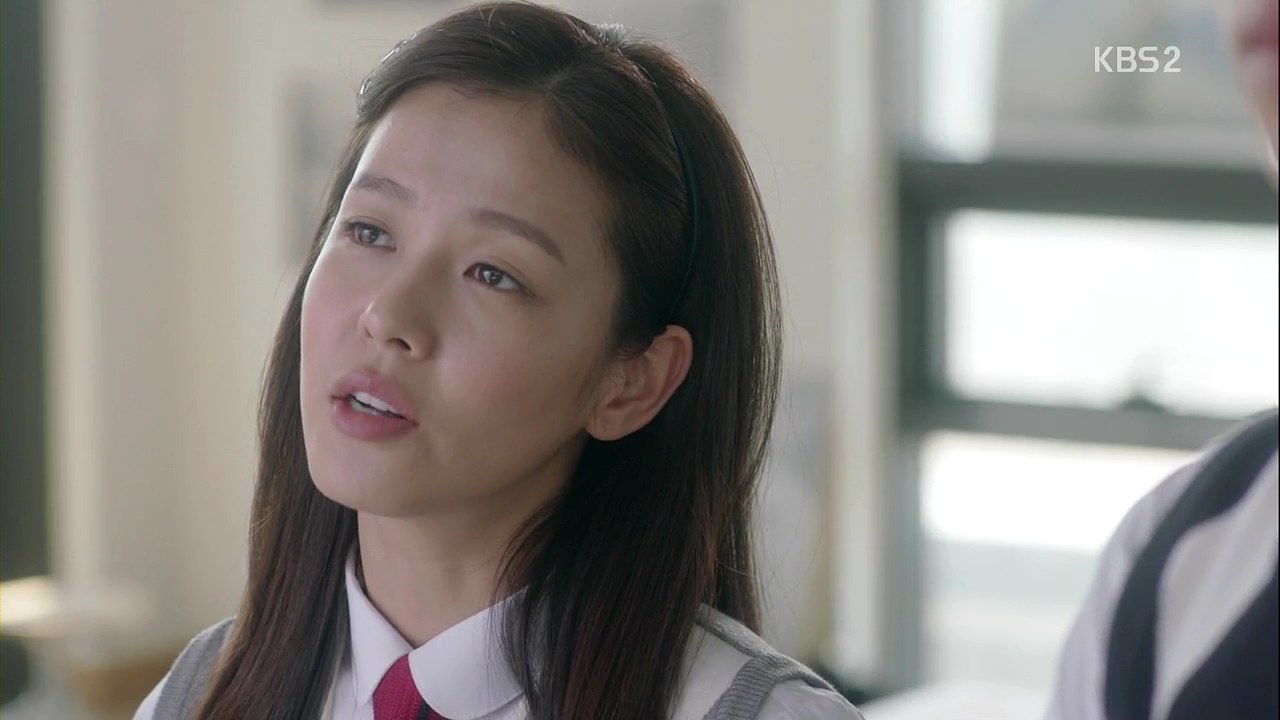 A story like Shark‘s puts a big load on the actors portraying the younger versions of Yi Soo and Hae Woo. The young actors are tasked with making the viewer immediately invested in them within a few episodes. Otherwise, there would be no point in continuing the series once we see the grown up versions since we wouldn’t care.

For Shark, Kyung Soo Jin as young Hae Woo and Yun Joon Suk as young Yi Soo accomplish that and more. Yun Joon Suk is especially engaging as he must navigate Yi Soo through such varied emotions as romantic love, love for family, anger and fear. All help to make Kim Nam Gil’s arrival as the grown Yi Soo, now Kim Jun, that much more triumphant.

The only other time I’ve seen Son Ye Jin was in the romantic comedy Personal Taste with Lee Min Ho where she played a cute and charming, though childlike furniture designer with issues. Shark definitely presents a different type of character for her to bring to life and she does it very well. She must quickly shift from a woman who has just happily gotten married to a woman who must balance being an honest prosecutor with her personal desire to avenge Yi Soo’s family.

The stress of suddenly getting bombarded with all these cryptic clues, dead bodies and unexpected revelations about her own family are excellently expressed by Son Ye Jin. This is definitely not a cutesy role and Son Ye Jin gives a vulnerable, yet firm performance essential to a story like that of Shark.

Former Miss Korea and Miss Universe runner-up Lee Ha Nui introduces us to Young Hee as a sweet and loyal girl-next-door working as Yi Soo’s personal assistant. But like I mentioned earlier, every character seems to be hiding something and there’s definitely something behind that sweet smile of Young Hee’s. Lee Ha Nui is very charming, but seamlessly injects that mysterious and threatening aura as we continue to learn more about her.

If Lee Jin Wook and Kim Jung Eun are two of my favorite Korean actors thanks to having helped introduce me to Korean drama, then Ha Suk Jin is a favorite of mine because he along with Eugene were the stars of my very first Korean film, Unstoppable Marriage.

Oh My Lady! was also the drama that took over Someday‘s timeslot on the International Channel/AZN, so Ha Suk Jin is definitely an actor I’ve followed since getting sucked into the Korean Wave. While he’s been steadily working in various daily and weekend dramas as well as the quirky, yet acclaimed tvN drama Once Upon a Time in Saengchori and the record breaking JTBC drama Childless Comfort, Ha Suk Jin hasn’t really had a truly standout role. I am definitely hoping Shark becomes that project for him and it certainly looks like he is going to get the material.

As Joon Young, he too has to portray a character who is hiding something beneath the loving and supportive exterior. Ha Suk Jin has shown he is a versatile actor who can handle both lighter comedy and heavy drama. But Shark definitely presents an opportunity to show off his talent and prove he’s worthy of more big time projects as leading man. And I hope he gets that chance.

Kim Nam Gil maybe has the easiest job on the series since we know Yi Soo and his motivations. He’s the most open book of all. But like any revenge drama, Kim Nam Gil must guide Yi Soo on the fine line between noble son wanting to avenge his father and crazy cold-blooded psycho. So far, he is able to do that with great help from the romantic angle of the story. He melts with regret and disappointment every time he sees Hae Woo, a stark contrast to the tough and ruthless anger he uses to fuel his desire for revenge. Kim Nam Gil is convincing in all aspects of Yi Soo’s conflicted character, solidifying his role as leading man, but like Son Ye Jin, opens himself up to be vulnerable.

With its strong cast, beautifully cinematic style and a script that is wrought with quiet tension, emotion, mystery and thrills, Shark is off to a very fast start and well on its way to earning itself a spot as one of the year’s most engrossing, if not best dramas.