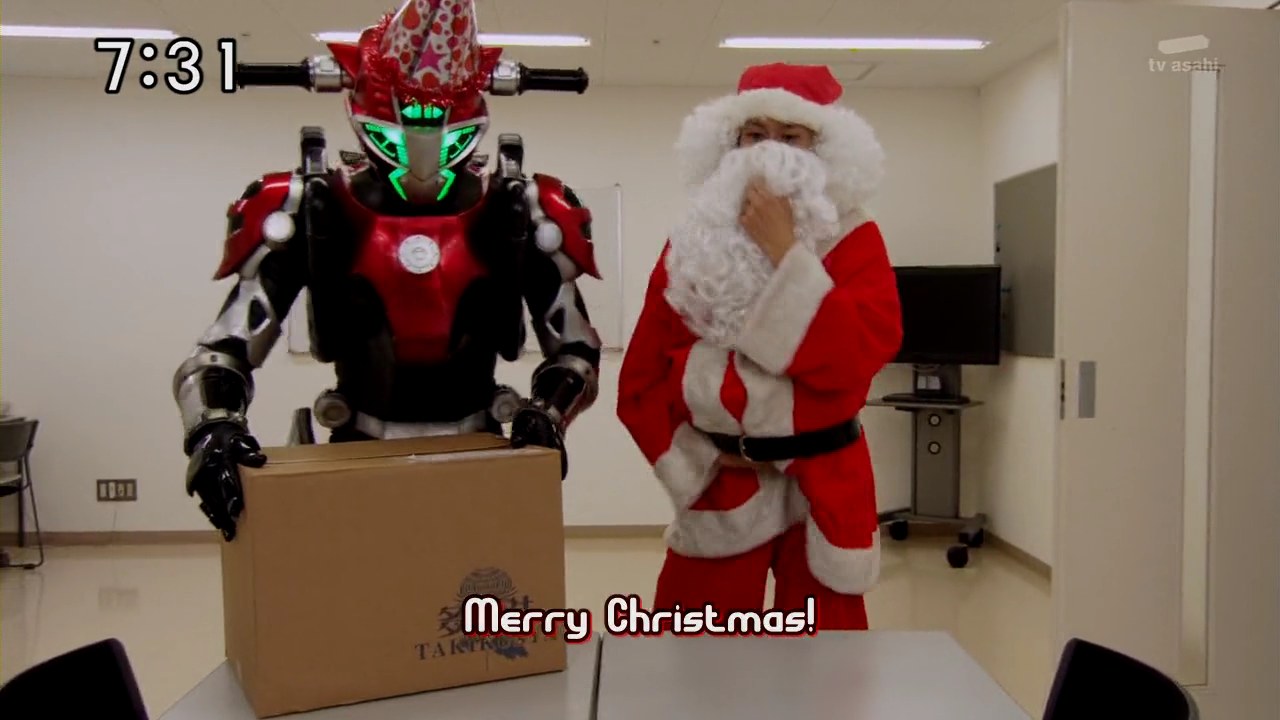 The Go-Busters have been looking for what they’ve dubbed Megazord Zeta, but with no luck. It’s been a week with no incidents, so Kuroki pulls them back and reverts the Special Missions Department to normal status, especially with Christmas coming up.

Ryuji, Yoko, Morishita, and Nakamura are preparing for the Christmas party tomorrow for kids with no families. It’s been an annual tradition for the department, starting with Kuroki and Ryuji, but it’ll be the first for Nakamura, Hiromu and Nick.

Hiromu comes into the room already dressed as Santa and says he’ll probably wear something else for his juggling routine. Plus, he’ll give the children his sister’s book as a present.

Meanwhile, Papa wants Escape to satiate him. Enter calls for her and he tells her that two cards are about to mature at the same time at the same location. This is good for Papa Messiah.

The Go-Busters head to the Children’s Center where they meet the new teacher. The kids bashfully peek through the door. Ryuji says the new teacher looks familiar.

While the teacher takes two kids downtown to shop, Enter finds the two Messiah cards attaching themselves to a shield and a kendo stick, separately. He decides to join them together to create a Kentateroid.

The Go-Busters get the call while decorating the Children’s Center and Nakamura says there are two Megazords on their way. Downtown, the Metaroid has sliced the Christmas tree in half and blown up buildings as people, including the teacher and kids, are sprawled over the ground.

Jin and J arrive and they all morph. But the Metaroid suddenly collects data from Hiromu, Ryuji and Yoko and they grow weak. They realize the Metaroid is collecting data on human anger.

J points out, “There’re two Santa Clauses!” when Enter and Escape, dressed in black Santa outfits, appear. Enter begins taunting the Go-Busters about their families who “foolishly disappeared” 13 years ago on Christmas.

He tries to get them even angrier and the Metaroid continues collecting data from them. It also continues ravaging the city and the Christmas shoppers. Anger is strength and sometimes it can generate great power, Enter says.

Hiromu goes Powered Custom and launches into a Volcanick Attack, but the Metaroid collects more data from him and he and Nick separate. The impact, however, weakens Kentateroid and Enter says they should retreat for now.

Ryuji and Yoko go help the kids and see them holding bouquets of flowers. The teacher says they kids used their allowances to buy them themselves to thank the Go-Busters for throwing the party.

Escape says they’ve collected enough data to use the Cards to make Papa whole again. But Enter says Messiah is an ever evolving and growing program and can grow infinitely even with just one card. That’s why he’s set up this game with Go-Busters and how it’s okay if they continue destroying cards.

But one card is not enough, Escape says. Enter proposes to her, why not just give up on her Papa and instead create a new Messiah. Escape is taken aback.

Nakamura tells the Go-Busters that Megazords Gamma and Delta are on their way. Hiromu tells the others he wants to take care of the Metaroid himself and has an idea. Kuroki pushes a button, bringing out a Christmas tree behind him and issues the mission: Save Christmas. Don’t let Christmas be a tragedy for anyone.

Ryuji and Yoko are in the cockpits of their Buster Machines. Yoko realizes that Kuroki and Ryuji started the party tradition at the Children’s Center so no one, especially them, would ever treat Christmas like a tragedy or sad time. He didn’t want us crying each year, Ryuji says. Yoko adds that’s why she never ended up hating Christmas.

The Megazords arrive and Ryuji, Yoko and J take on Megazord Gamma while Jin takes care of Megazord Delta.

Meanwhile, down below, Hiromu and Nick go to the Metaroid. Hiromu sends Nick off and the Metaroid starts taunting him again with insulting comments about his parents. But Hiromu doesn’t react. The Metaroid begins attacking, but Hiromu barely reacts, only to sort of defend himself. 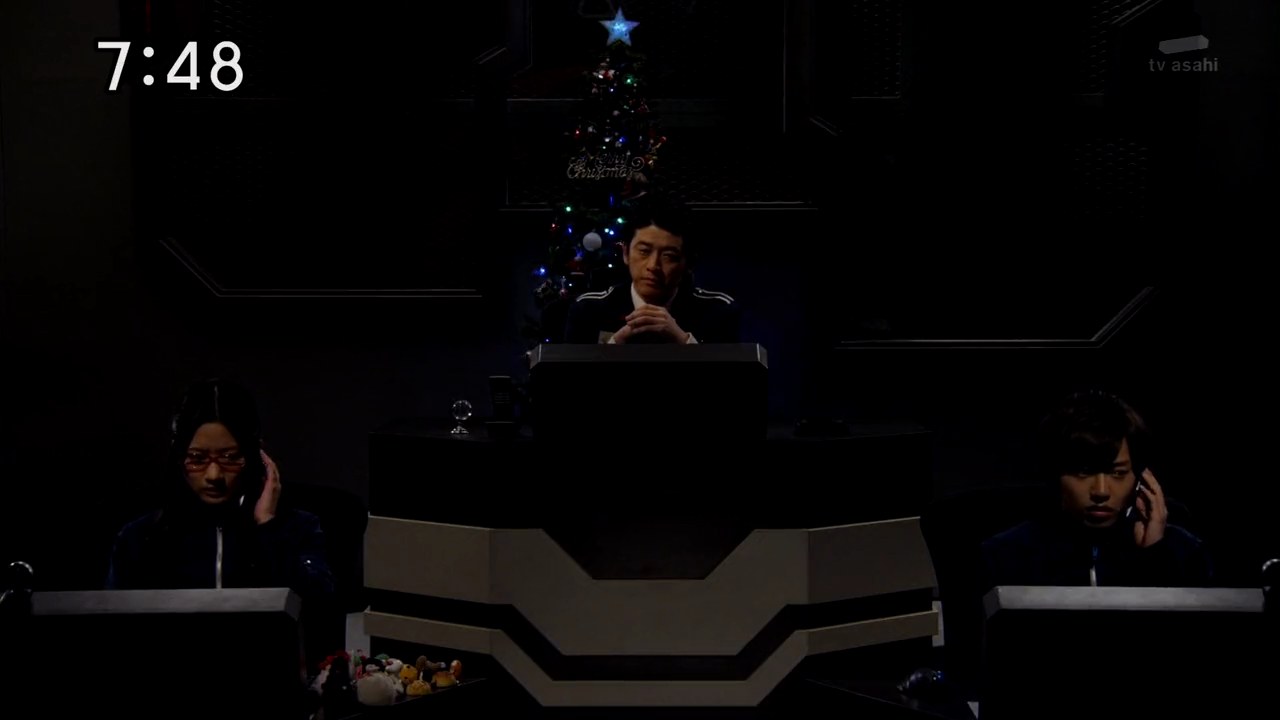 Enter arrives and wonders what Hiromu is doing. Nakamura and Morishita worry, but Kuroki turns on the sound coming from Hiromu’s helmet. He’s listening to Nick playing the music of his little Christmas keepsake.

Hiromu listens and keeps himself calm. “Non non non,” Enter says. Why are you giving up your strength.

Hiromu tells Enter he made two mistakes. First, anger isn’t the only way to become stronger. Sure, sure, Enter says, love, sadness, etc, but anger is one of the ways. He asks for his 2nd mistake.

Hiromu says Enter’s 2nd mistake was picking today, a day people cherish so dearly. All the people’s hopes are with them today to help save Christmas.

Also, Hiromu’s calm response to the Metaroid allowed him to memorize its sword technique.

While Lioh joins the others in fighting the Megazords, Hiromu goes Powered Custom and uses the Lioh Attache to fire Final Buster towards the Metaroid. But Enter quickly grabs the Messiah cards before the Metaroid is fully destroyed.

Just then, Escape arrives in Megazord Zeta and manages to swipe the two cards from Enter’s hands. I’m taking Papa back, she says and then proceeds to have the Megazord grab Enter.

You treated Papa like a pet and merely played with him, Escape tells Enter. He never intended to restore him, so now Papa nor her need him anymore. 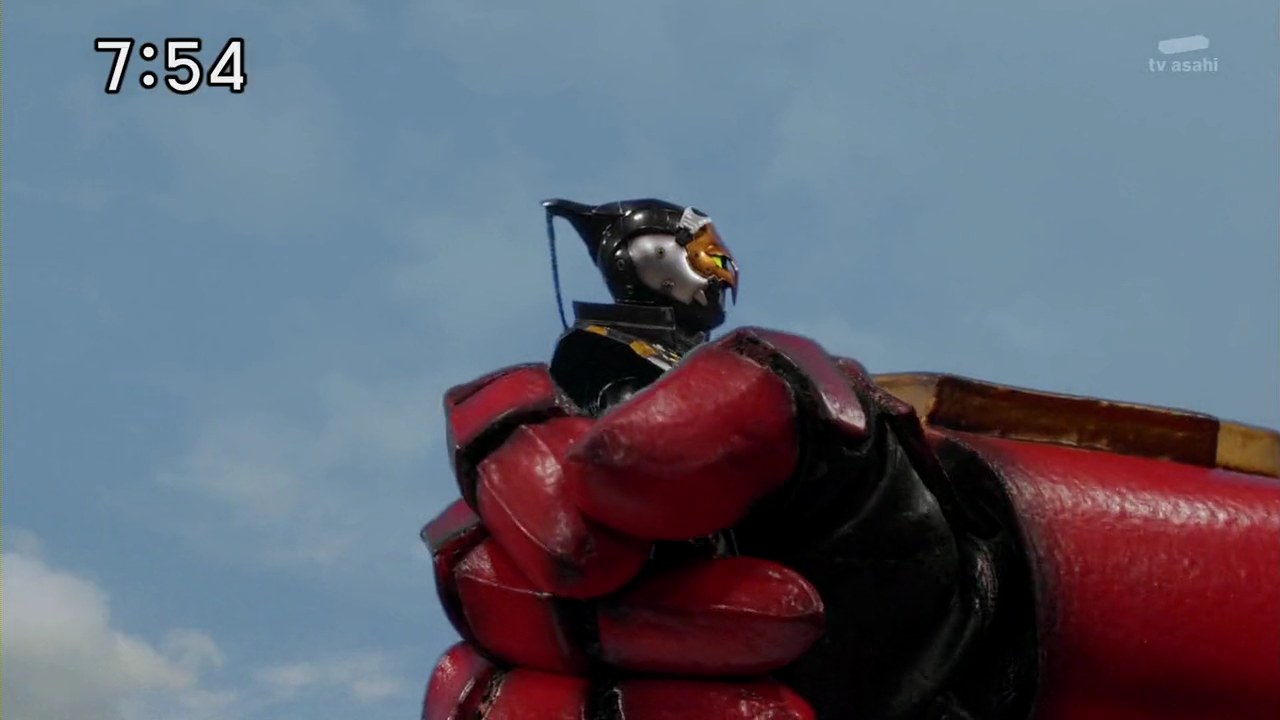 Is that so, Enter says. Funny how she’s only a bunch of data, yet she has such strong feelings. Because of her imperfection as an avatar, she become a perfect human copy instead.

Sayonara, Escape says and she smashes Enter in the Megazord’s hand. Everyone gasps.

She tells her Papa that the Go-Busters are the only ones left in their way and sends a huge explosion through the city and at the Buster Machines.

Episode Thoughts
Well damn! Just when you thought Go-Busters was losing their mojo, they bring the big guns back out.

I’ve been saying since they entered the Subdimension, it’d be odd if they didn’t feel even a little bit of grief from losing their families. It shouldn’t be such an easy thing to get over. And they have managed to continue showing the Go-Busters still feeling the loss, but also using it to strengthen their resolve.

As we saw in this episode especially. Christmas should be an unbelievably dark and traumatic time of year for them, but not only have they managed to keep the holiday a happy time for themselves, they’ve made it their duty and responsibility to keep it that way for everyone else as well. Especially for other children who might not have families to spend Christmas with.

That’s great, deep emotional stuff that the show has done very well with through the season. It’s not just fun and games. Go-Busters has had a very real and serious backstory that they haven’t shied away from. Even with the considerably lighter episodes since the battle in the Subdimension, they’ve still managed to keep that heavy memory in the minds of the Go-Busters as a way to push them forward.

I think this was an episode that really captured how Go-Busters has raised the stakes, even if it might not be the most commercially viable direction to take.

With Escape, I think we all saw that coming. It was only a matter of time before she realized Enter did not have Papa’s best interests at heart.

Now next episode is supposed to be the final battle with Messiah. Final?! They are certainly going to keep us guessing these last couple of weeks aren’t they?