Kevin and Mike are training and Mike admits he can’t keep up with Kevin’s technique, so he has to be creative in battle, like using an apple for instance. Jayden wishes they work together better.

Epoxar the Nighlok arrives in the city and he glues Kevin and Mike’s wrists together. And unless they defeat him, they’ll stay that way forever. Down on the Sanzu…

OOH-AH-OOH! Octoroo suggests Epoxar glue a couple of humans together to trap the other Rangers. At the Shiba manse, Jayden can’t chop the glue cuffs off. So Kevin and Mike try to train glued together. They can’t get in synch though and Mike gets a tap on the butt from Mia because of it.

They continue fighting each other inside and the girls try to calm them down. But they end up throwing trash all over the living room. So Mentor/Ji tells them to get some groceries. 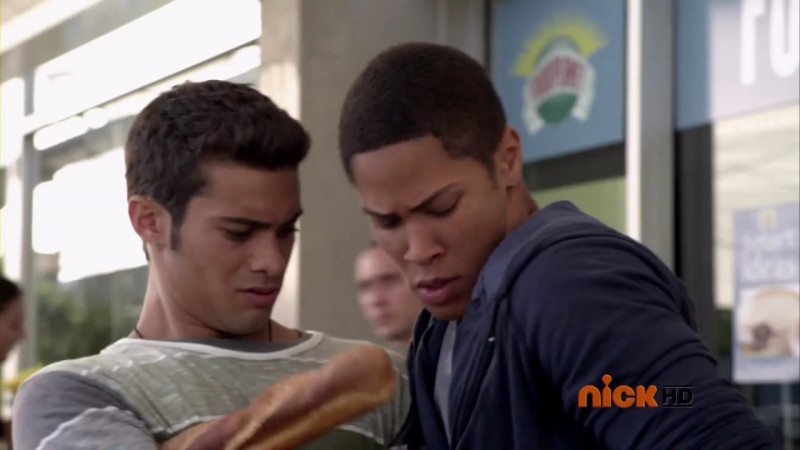 They get lots of stares from people and Mike tries to have fun with it. After getting the groceries, Kevin tries putting the change in his pocket, but Mike thinks Kevin’s just getting him to touch his crotch, causing the money to fly away. They need to find an easier way to get home, so Mike suggests he ride in a shopping cart while Kevin pushes. Good idea, Kevin says. But now he has to pee. Meanwhile, Epoxar finally lures the other four Rangers into his glue puddle.

“Do you have to work hard at being this dense, or does it just come naturally?”
Zing!

Epoxar shoots more of his sticky white goop at the Rangers. 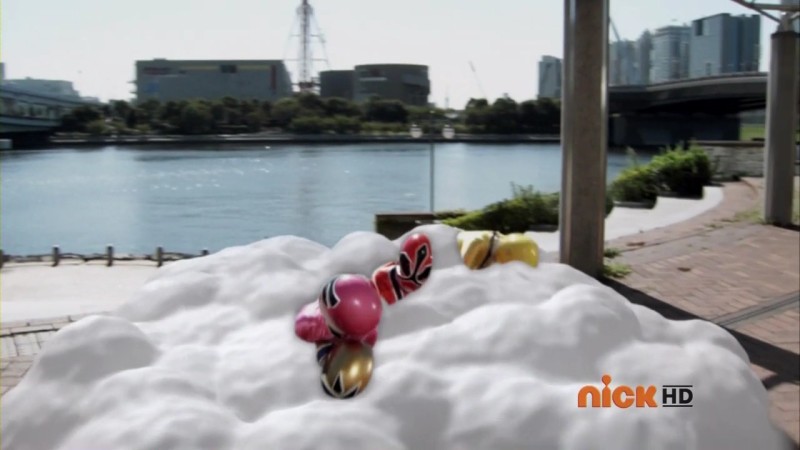 Epoxar is amused. (I am too!) But Kevin and Mike arrive to stop Epoxar’s fun. Mike asks Kevin to lower himself… to match his skill level, but Kevin wants to be creative and follow Mike’s lead.

They morph and use their sticky hands to work together and defeat Epoxar’s first life. All the glue disappears, freeing Kevin and Mike as well as the other Rangers as Epoxar embiggens. Jayden and Antonio summon the zords and finish Epoxar off together.

Meanwhile, Serrator visits Decker and Dayu in the forest. He says he’s impressed with them both for being able to handle being half-Nighlok. He hands Dayu a dagger which has special magic to keep while he fixes her Harmonium and Decker’s URAMAASAA.

Serrator says they will play a huge part in mankind’s destruction. As long as they do his bidding, they cannot fail. 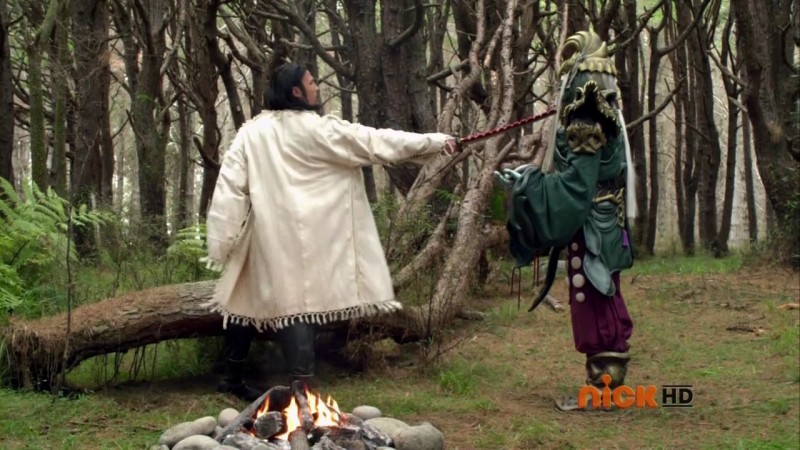 Episode Thoughts
It was a solid episode. Bulk & Spike went back to being useless and unfunny again, but it was a fun episode that strangely featured a lot of pseudo-sexual and homoerotic jokes. (Sorry kiddies!)

Pretty much filler, except for the Serrator/Decker/Dayu scene which was short, but still interesting and definitely part of the slow set-up to whatever Serrator’s endgame is. Xandred meanwhile has been a pretty boring villain with him and OOH-AH-OOH Octoroo’s back and forth becoming tired. I don’t remember it being that way on Shinkenger. Speaking of…

How Much Better Was Sentai Than Power Rangers?
Corresponding Shinkenger Episode: Act 37 – The Big Glue Battle

Samurai‘s take was fun, but Shinkenger‘s was even more fun. The jokes were funny without being overtly sexual (sorry kiddies!). It was at a slower pace too, but still fun. That’s not to say Samurai didn’t have some genuinely funny lines (see above). But Shinkenger‘s comedy fit with the characters.

The most interesting comparison though was how Samurai again directly translated Ryuunosuke’s personality onto Kevin (and failed) and how in Shinkenger, Ryuunosuke was to Mike, actually, as Chiaki was to Kevin during their shopping trip. Ryuunosuke’s always been over the top and Chiaki more the cool guy with swag. On Samurai, Mike’s a joker while Kevin’s… well, boring. So why Samurai continues to feed uncharacteristic lines to their characters, I have no idea.